Our research group at the University of Cambridge specialises in setting up custom built microscopes to accelerate research into neurodegenerative diseases. Recently, with funds from Alzheimer’s Research UK, we have built a ’super-resolution’ microscope to see things we could not see before. This microscope allows us to visualise toxic proteins involved in Alzheimer’s disease that are some 10,000 times smaller than a pinhead.

When light goes through a microscope, each unit of the object we are trying to observe (for example, a toxic protein) appears as a large blob, which is at least 100 times larger than the original. However, because of the limited resolution of traditional microscopes, if several of these units, or ‘blobs’, overlap, the resulting image can become blurred (like painting fine detail with a brush that is too large).

However, we can recover the object in much sharper detail if we do not image all its units at once.  Instead, we use tricks to get each one to ‘blink’, lighting the object unit by unit (‘blob’ by ‘blob’), and recording each unit separately. In the case of a protein, the centre of each blob we see tells us where the original molecule was located. By taking thousands of images one after the other, we can reconstruct a detailed image of the protein.

The technique can be thought of as ‘molecular pointillism’ – creating images from a series of dots, similar to an impressionist artwork.

This process offers an unprecedented way to see toxic protein shapes directly in great resolution within individual cells. It permits us to study the location and movement of these protein clusters with much greater precision than has been possible before.

We are currently using this technique to study two questions: What shape are the toxic proteins in Alzheimer’s, and how do they travel inside and outside of brain cells?

1. What shape are the toxic proteins in Alzheimer’s?

Proteins attain their function by folding into 3D shapes in cells; only in their correct shape can they perform correctly. The two proteins involved in Alzheimer’s, amyloid-beta and tau, can ‘misfold’ and become toxic. In their misfolded states, they have a tendency to clump together and form clusters, which accumulate in the brains of people with Alzheimer’s.

There is growing evidence that the shape and size of these protein clusters are intricately linked to the onset and progression of disease. Our new microscope is so powerful that it is capable of visualising the shape of protein clusters directly in brain cells in a dish. This research will allow the testing of drugs designed to target specific, toxic, protein shapes.

2. How do these proteins travel in and out of brain cells?

We also hope to understand why the proteins involved in Alzheimer’s seem to spread from one part of the brain to another. Movement of these proteins between cells may lead to their toxic effects being transmitted from one cell to another, spreading the disease to healthy brain tissue.

A study we recently published, using our super-resolution microscope, showed that if we add healthy tau to the outside of a cell, it enters the cell, forms long clusters, and then attracts the healthy tau that is naturally present in the cell, attaching it to these clusters. This, we hypothesise, forms part of a mechanism that leads clusters of potentially toxic tau to form in a growing number of cells. 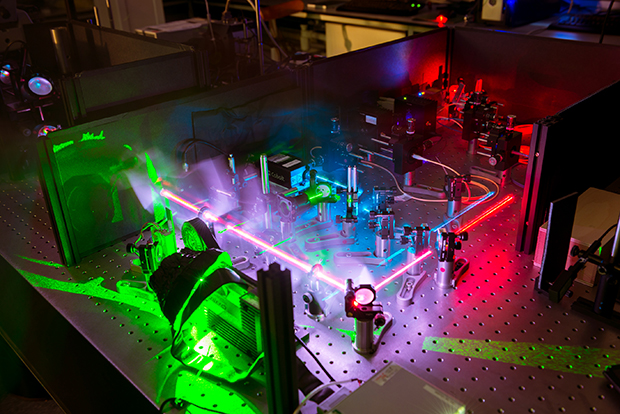 We are now taking this work further to understand this movement of tau more precisely. We will also investigate if amyloid-beta follows the same path, and whether tau and amyloid-beta influence each other. For each of these studies, our super-resolution microscope will be invaluable for taking highly precise images of what happens in brain cells.

Dr Claire Michel studied biochemistry and genetics in France, her home country, before moving to the UK, and embarking on research into Alzheimer's disease. Three years ago, she joined the Laser Analytics Group at the University of Cambridge – a team of physicists and engineers who are experts in the design of specialised microscopes, such as ‘super-resolution’ microscopes – to take part in their growing research into neurodegenerative diseases. She is now leading their research on the spread of tau, a protein involved in Alzheimer’s, from cell to cell.
View all posts by Dr Claire Michel →