You are here: Home > Amyloid and tau; partners in crime
By Dr Emma O'Brien from Science News on 24 July 2014 0

Memory loss can be, for many families, the first sign that a loved-one is developing dementia. It is the most well-known symptom of Alzheimer’s disease, and often very distressing. But how are memories formed? And how does Alzheimer’s alter the way we remember?

How are memories formed? 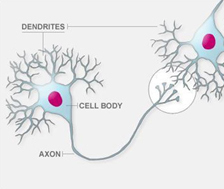 Healthy nerve cells: Each nerve cell can communicate with several other nerve cells via dendrites.

In Alzheimer’s and other causes of dementia, the pathways underlying memory formation are altered. Understanding how these processes are damaged is an important part of the research that we fund. For many years it has been widely accepted that the build-up of a protein called amyloid into ‘plaques’ is the key culprit in Alzheimer’s. The accumulation of plaques can lead to nerve cell damage, meaning a loss of connections. In regions of the brain associated with memory formation, nerve cell destruction causes the symptoms that are so distressing for people with dementia. The build-up of amyloid can also prevent the strengthening of connections between nerve cells, making it hard for new memories to form. 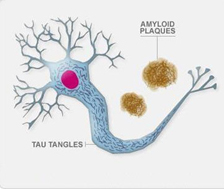 Nerve cell in Alzheimer’s disease: Nerve cells contain tangles of tau. Outside of the cell, amyloid plaques are found. Both of these proteins can cause damage, leading to a loss of communication between nerve cells.

However, over recent years, this theory for the progression of Alzheimer’s has been questioned. Research has shown that the link between the number of amyloid plaques and loss of memory and thinking is not always simple. Some people with a large number of amyloid plaques in their brain may have no trouble with memory tasks, whilst others have great difficulties. So while amyloid build-up is a hallmark of Alzheimer’s, it is clearly not the whole story.

Bring on the tau researchers. Tau is another hallmark protein found in Alzheimer’s disease. Normally, it serves an important role in nerve cells, forming part of the scaffolding that spans the long nerve cell bodies. Tau also helps the transport of biological molecules from one end of the cell to the other. When tau is abnormal, it forms tangles, causing transport to go awry. This can disrupt communication between nerve cells because the biological molecules needed for communication are not in the right place at the right time. The contribution of tau to Alzheimer’s has for many years been poorly understood, so understanding the protein in more detail is a key strand of our Research Strategy at Alzheimer’s Research UK. That’s also why we’re helping to sponsor the CRACKIT UnTangle initiative, a funding scheme to aid scientists solve the tau puzzle.

However, working out the individual roles of tau and amyloid in Alzheimer’s progression may not provide that eureka moment for disease treatment. As highlighted in a recent article by one of our funded scientists, it is likely that it will be the contribution of both proteins that sheds light on how best to tackle the disease.

Dr Tara Spires-Jones, form the University of Edinburgh, has published an overview of our current knowledge about tau and amyloid, and how they act to disrupt nerve cell function and memory formation. She has highlighted some key studies that have taken place over recent years suggesting that amyloid and tau work together to cause the destruction seen in Alzheimer’s.

Perhaps the biggest indicator that amyloid alone does not drive Alzheimer’s is that problems with memory and thinking are strongly linked to the amount of abnormal tau. So while there is no clear relationship between the amount of amyloid and a person’s ability to think, there is a very clear link between the amount of tau and these symptoms. Interestingly, several studies suggest that tau may need to be present for amyloid to have its toxic effects on nerve cells. Removing the tau could make amyloid harmless. Clearly the two proteins are partners in crime in the destruction of nerve cells.

Scientists researching Alzheimer’s disease have made huge progress in understanding the steps that lead to dementia. However, more research needs to be carried out so we can work out how best to target these pathways for treatment. Hopefully the work of Dr Spires-Jones and others will get us to that point sooner!

You can read more about Dr Spires-Jones’ research project here.

Tagged with: Our research projects, Dementia research, Alzheimer's symptoms, Our work
Bittersweet Holidays
What dementia means for ethnic minorities in the UK