You are here: Home > Dementia with Lewy bodies: what can the heart tell us about the head?
By Dr Emma O'Brien from Science news on 9 November 2015 0

You may have heard an interview last week with the late Robin Williams’ wife, discussing his health in the months before he took his own life. Robin Williams had been living with a form of dementia called dementia with Lewy bodies (DLB). DLB is the third leading cause of dementia in the UK and around 100,000 people in this country are living with the disease. Yet, it is a form of dementia that many have not heard of, and fewer still understand. In this blog we will take a closer look at DLB and share some of the research that scientists across the UK are undertaking to tackle the disease.

What is dementia with Lewy bodies?

People with DLB can experience common dementia symptoms, including memory loss, spatial awareness problems and a decline in problem solving skills. But there are also some more specific features of the disease. These can include changes in alertness, visual hallucinations, sleep disturbances and movement difficulties. These movement difficulties, such as tremors and muscle stiffness, are also experienced by people with Parkinson’s. There is a lot of overlap between the two diseases as Lewy bodies are the culprit feature in both DLB and Parkinson’s. 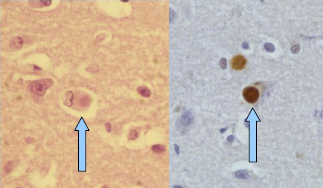 Under the microscope – Clumps of protein called Lewy bodies, which build in the brain in DLB.

Lewy bodies are clumps of a protein called alpha-synuclein. In healthy cells, alpha-synuclein plays a role in nerve cell communication. But in dementia with Lewy bodies, it forms toxic clumps that damage nerve cells. Researchers are still unravelling how alpha-synuclein forms these clumps and what roles genetics and lifestyle play in the disease.

How is it diagnosed?

Diagnosing DLB is challenging because the symptoms fluctuate, and there is a lot of overlap between Parkinson’s and Alzheimer’s disease. Clinicians use brain imaging techniques to help guide diagnosis and differentiate DLB from other forms of dementia. A DaTSCAN is an imaging technique that allows clinicians to spot areas of the brain that have been damaged by Lewy bodies. But researchers are always seeking to improve and refine these techniques. Improving the accuracy and timeliness of a DLB diagnosis will ensure people receive the right support and access to current treatments to try to help with the diverse symptoms.

Alzheimer’s Research UK is funding a team at Newcastle University, which aims to shift the diagnosis of DLB even earlier. But rather than focussing on changes in the brain, they’ll try a different tack. Alpha-synuclein builds up in nerve cells both inside and outside the brain, including those that surround the heart. From previous studies they believe that changes to these nerve cells in the heart occurs before damage in the brain. The team, led by Prof Alan Thomas, will use a type of scan to assess heart nerve cell health in people with mild cognitive impairment (MCI), a condition associated with mild memory and thinking difficulties. They’ll use this tool to predict which people with MCI are likely to go on to develop DLB. They hope that developing a technique that guides detection of DLB in the earliest stages of memory loss could add another string to the bow of doctors diagnosing the disease and allow people to get access to appropriate services and take part in future clinical trials, before nerve cell damage is too great.

Another line of enquiry for early detection of DLB is inflammation. Inflammation is the body’s response to damage, but we now know from studies in Alzheimer’s disease that the immune system can do more harm than good and lead to nerve cell death. Less is known about the role inflammation plays in DLB and we are funding a study at the University of Southampton to find out more. Dr Jay Amin is an Old Age Psychiatrist with a passion for research. His project is focusing on the inflammatory response in DLB and comparing this to Alzheimer’s disease. By comparing blood samples between groups of people with both DLB and Alzheimer’s, he hopes to detect an inflammatory ‘fingerprint’ that could help differentiate between the two diseases and improve the accuracy of dementia diagnosis. This study is generously supported by the Lewy Body Society and by powered by volunteers. If you’d like to sign-up to take part in research, you can read more here.

Current treatments for DLB include interventions to help with behaviour and medicines to tackle movement problems, as would be prescribed in Parkinson’s disease. But these drugs have a lot of side effects, including hallucinations, and do not stop nerve cell death. Current Alzheimer’s treatments may also help to boost memory and thinking in people with DLB but they also do not stop the underlying damage being caused by the disease. It’s important that we invest in projects that will uncover new approaches to tackle DLB.

We have recently funded a Pilot Project Grant to explore the early stages of drug discovery for DLB. Dr George Tofaris at the University of Oxford is developing tools to stop alpha-synuclein from building up. He will test lots of different experimental drugs in nerve cells in a dish. Dr Tofaris is particularly interested in the cell’s waste disposal machinery. He will use this funding to develop methods to boost waste disposal, hopefully clearing toxic alpha-synuclein. This two-year project has just got underway and we look forward to updating you on its progress.

DLB isn’t rare but there is little public awareness. Robin William’s sad death has thrown new light on the disease and through research we will find a way to tackle it.