About 20 minutes into Arthur Smith sings Leonard Cohen (Volume 2) I speak a poem I have written that drastically shifts the mood of the show.

Pulling up late
after the party,
they see her,
their neighbour,
standing in the street.

She is looking, she says,
for a lift to London.
She needs to get home.
‘Hazel,’ they tell her,
‘This is your home –
‘you live here, in this house.
London is 30 miles away.’

The door is open.
They take her in
and see she has packed a bag
(if a jumper and a packet of biscuits count as packing).

Oh Hazel,
It is 35 years since you left London
to live, as you liked to say, ‘in the shires’.

But there she still is
that grammar school girl
from Camberwell Green
kissing sailors and dancing
In Trafalgar Square.
It is VE day
and the rest of the century
Is yours.

Hazel Smith is my mother and the incident above was described to me by her neighbours, Paul and Lucy. When I started writing this Leonard Cohen show I had not intended to talk about her but I came to realise that one of my themes was loss and that my ma was struggling with her own losses.

Hazel bravely entered widowhood 10 years ago and did her best to embrace living alone for the first time in her life (she resisted moving in with us), but I knew how much she missed my father. Over several years she began to lose some of the things that had sustained and defined her – she stopped doing the garden, reading novels, making cakes, sending cards and letters. She began to repeat herself and mislay things and she began to drink alcohol in alarming quantities. 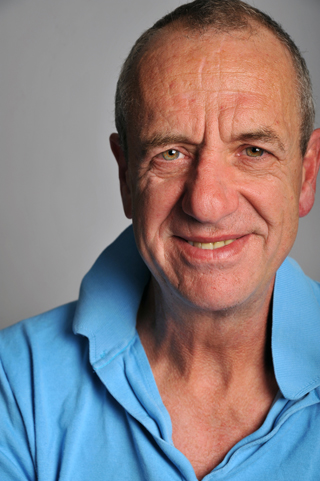 I was uncertain at first about discussing her decline into dementia publicly – was it disrespectful? Too personal or too sad for what was essentially a comic enterprise? My brothers encouraged me and I did a try out in front of a small audience. I found that the sections in the show about Hazel affected the audience; afterwards several of them shared stories of their own parents and grandparents.

I won’t tell you any more about Hazel – you will have to come to the show for that – but, suffice it to say, she is now in a care home and her situation is miles better than it was last year; in some ways she is happier than she has been for years even though her short term memory is no more. My brothers and I visit her often and are always impressed by how diligent and understanding the carers are.

People say ‘live in the moment’ and I see that you can do this very easily if you can’t remember the last moment and have no idea what the next will be. On a recent visit Hazel and I watched the news headlines on TV together – famine and flooding. I remarked, “What a terrible world we live in”

“Yes,” said my mother, “I would hate it.” We laughed long and loud together.

Arthur Smith is a stand-up comedian from Balham, London. He has written West End plays including An Evening with Gary Lineker and The Live Bed Show and is a regular presenter on BBC Radio 4 and 4 Extra. In his new show, Arthur Smith sings Leonard Cohen (Volume 2), he talks about his mother’s dementia journey.
View all posts by Arthur Smith →