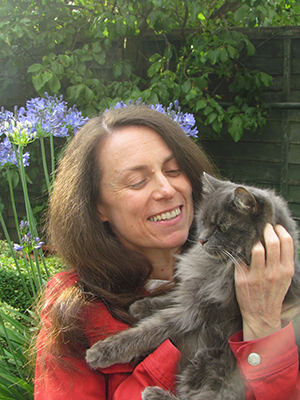 Prof Clare Bryant has been awarded one of our first ever Interdisciplinary Research Grants, bringing her expertise in immunology to a new collaboration in dementia research. I caught up with Clare as her project got under way, to find out what drives her.

Clare Bryant, Professor of Innate Immunity at the University of Cambridge.

What will your new project focus on?

I’m interested in a molecule called toll-like receptor 4 (TLR4). Its role is to detect pathogens, and it’s your early alert system: it sees a bug, it sets up an inflammatory response and that controls the infection. Inflammation is important for healing, but you need a balance – enough to heal, but not too much so it gets out of control.

Research is showing that TLR4 is important in Alzheimer’s, so we want to know how it responds to Alzheimer’s proteins. We don’t know whether it’s an early pathway that sets the disease process off or whether, once the inflammatory process has started, it continues as a response to the accumulation of toxic proteins.

What hope could this bring to people with dementia?

We want to know if interfering with TLR4 could break the cycle and switch off the damage effect. The best case scenario would be if compounds targeting TLR4 could be fed into Alzheimer’s drug discovery programmes.

What was your early career path?

Then I went into Sir John Vane’s lab at St Bartholomew’s Hospital in London. John won a Nobel prize for discovering how aspirin worked, and to be working in a Nobel laureate’s lab was really exciting. I could see medical science and apply it, and that finalised what I wanted to do: retain a clinical interest, but be a scientist working on fundamental mechanisms.

How do you collaborate with other researchers?

I’m lucky to have worked in some fantastic labs and met some wonderful people, and we all collaborate. It’s important to be able to talk to somebody with a different perspective – I now have a great network all over the world that’s transformed what I’m able to do.

Why did you change your focus to dementia research, and how will your previous work apply?

Toll-like receptor 4 (TLR4) in a cell membrane – Click to enlarge.

Working with Prof David Klenerman we’re beginning to understand TLR4 in the context of bacterial toxins. It was the next logical step to expand our techniques to look at proteins within the body that are recognised by TLR4. David has worked in Alzheimer’s for a long time, and we’re interested in two proteins: amyloid-beta, which accumulates in Alzheimer’s, and alpha-synuclein, which is involved in dementia with Lewy bodies.

A lot of the things I’ve worked on previously have an immediate need: to stop the infection now. Working on the central nervous system we have to think in a different way, and it’s great to have a network of neuroscientists to help us.

It’s also important to have some idea about the condition and what it means. My father-in-law died with Alzheimer’s, so I know how horrendous it is. You need the clinical perspective to appreciate that the disease is more complicated than just the cell you’re studying.

What’s the best thing about working as a scientist?

It’s a difficult job, but if you’re getting exciting and interesting results it makes it all worthwhile, particularly if there’s the potential for new treatments. From our previous work on cat allergens I’m starting to see how potentially we could develop therapies for asthma and allergies, and that’s exciting because hopefully I’m doing something that will make a difference. It would be very satisfying if we could block the process of a disease like Alzheimer’s.

What would you say to convince someone about the importance of dementia research in one line?

Dementia is a nasty killer that takes away somebody’s personality and leaves them in a shell: that disappearance of an individual is horrendous, and anything that can stop that process is critical. 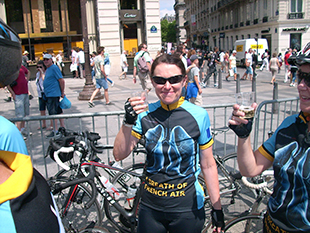 What do you like to do outside the lab?

I’m a runner and a cyclist – I’ve just got back from cycling from London to Paris, raising money for the relatives’ room in pulmonary medicine at Addenbrooke’s Hospital (in Cambridge). I enjoy travelling to Italy, so I’m learning Italian, which I’m very bad at but I’m trying! I also have cats, I make mosaics, and I’m notorious for liking fast cars.

Apart from people, my cats are important but I’m also partial to wine. So I would have to say my cats, fine wine, my bicycle and my running shoes.

Tagged with: Our research projects, Our work
Why research is better with a little help from our friends
Global partnerships to meet the dementia challenge