You are here: Home > Shazam – and the everyday disruption of memory loss
By Tim Parry on 7 April 2017 0

We’re fortunate enough to be working with InnOcean and Shazam on a small awareness-raising project launched yesterday. If you’re not a Shazam user – and there are one billion of them –  it’s a versatile smartphone app that allows users to find out the name and artist of a song they might hear when they’re out and about. Hold up the phone as close to the music source as you can, Shazam will take a listen and deliver you the information on the track.

The small campaign we’ve launched imagines a world where Shazam can’t remember the name of the track or artist it’s listening to. The simple adverts we put on-screen as the user tries to Shazam their track express the frustration and difficulty of placing the track, as might be experienced by someone with dementia. When Shazam finds the track (or delivers a non-match message), we describe on-screen how Alzheimer’s can destroy precious memories, but that pioneering research can help us protect them. 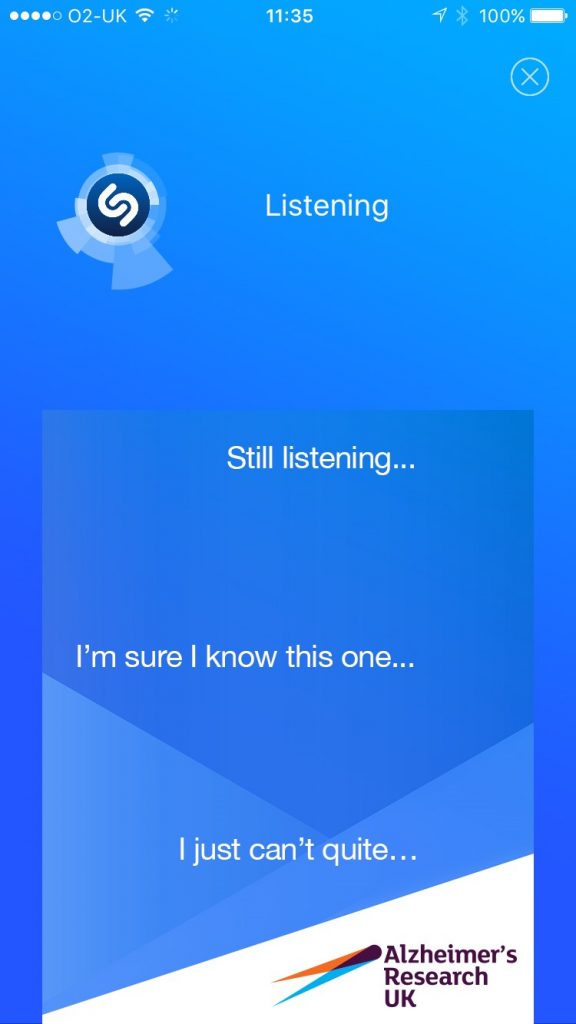 Dementia introduces immense difficulties to daily tasks and activities that we all take for granted. In fact, the impact of diseases like Alzheimer’s on “Activities of Daily Living” is a measure used widely in research studies to assess the severity of someone’s condition. As dementia progresses, making a cup of tea, popping to the shops or taking a train become fraught with additional challenge. While a raft of memory and thinking problems can make these activities difficult, problems with memory are a common factor.

But as well as interfering with life’s daily practical tasks, memory problems also compromise other moments of our lives – where emotional connections to people, places and other stimuli can be disrupted. Our project using Shazam looks at just one of these – recall of song. Music is evidently special to a great many of us, but even a person who isn’t musically-oriented may still associate song with important moments in their life. The day they got married, the song that played when they met their partner, the first tune their toddler bopped around to.

For us it was thought provoking to imagine these often intense emotional connections to song being broken via the interesting medium of Shazam. Whenever we hear a new song, or form a memory around a special soundtrack in our lives, physical connections in our brain are forged that may last a lifetime. For someone with dementia, in particular Alzheimer’s, these connections are at risk of destruction, and for someone with advanced disease, many of those connections are lost.

At the heart of our research is an ambition to protect those connections from the attack of the disease. While we work hard to improve our disease understanding and drive for more treatments in the lab, what this amounts to is the very real possibility that those songs, those moments and our connection to the world can be protected.

The Dementia Challenge five years on
The Mighty Quiz