The tunes to these words take me straight to the back seat of Mum’s rackety Volkswagen. There Mum taught my younger brother and me the popular songs of her youth (and an ever-expanding vocabulary of swear words – but that’s another story). I love to remember such times. 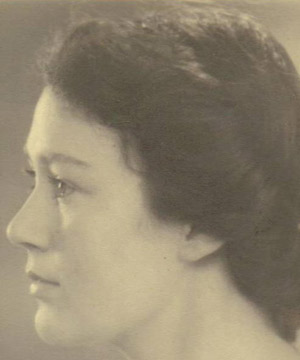 Marianne’s mother who used to teach her children the songs of the time.

Mum had Alzheimer’s. She was diagnosed in 1999 when she was 79. So much for the mantra that if you use it you won’t lose it: only nine years before, in the year of her 50th wedding anniversary, Mum had taken an upper-second class degree in English.

I assumed Mum would go into a home. But, as she had been diagnosed with dementia, the only homes that would look at her were homes specialising in dementia. Visiting those homes was one of the most depressing experiences I have ever had. It was unimaginable that I could relinquish Mum’s care to such a place. So, in 2003, Mum came to live with me.

At first this was wonderful. Caring from a distance is terrible. I spent so much time worrying about her and feeling guilty that it was a positive relief to have her with me. I knew where she was, and I knew she was warm and well-fed. When she was living 200 miles away I spent all my time imagining her unconscious in the stream at the end of her garden, developing hypothermia because she had forgotten how to put the heating on, or starving to death because she was forgetting to eat.

Mum had also become terribly lonely. She had given up going out because she felt vulnerable. Her friends had melted away, and her family all lived busy lives and were too far away to see her regularly.

So when she first came to me the change in her was delightful. Her face lost the haunted look it had started to acquire, she touchingly exclaimed every five minutes or so that she loved living with me, and she became her usual sociable and animated self.

But it didn’t last. First her ability to entertain herself deserted her. Reading was no use; she couldn’t remember the plot. She started to hate her embroidery, unpicking it every time she did it and bemoaning her own ‘stupidity’. After one particularly trying evening I hid the embroidery in the attic. It was never referred to again.

Mum would sit in her chair listening to Ella Fitzgerald and the songs of the Second World War.

Slowly her language started to go. We could still converse, but it was becoming very one-sided. Mum just repeated herself. Over and over and over (and over) again. We could no longer watch television together. She got the wrong end of the stick so often I couldn’t bear it. As for going to the cinema, theatre, opera or ballet, all of which she’d once loved, those days were over.

Instead, when Mum wasn’t at day-care, she would sit in her chair listening to Ella Fitzgerald and the songs of the Second World War. These two CDs played on a repeating loop. When Mum was in a good mood we’d sing to them: ‘Don’t sit under the apple tree with anyone else but me’, ‘Run rabbit, run rabbit, run, run run!’ The very first chord of any of these songs still triggers tears (and smiles). 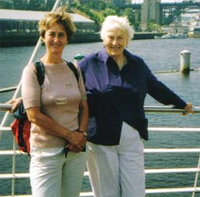 Marianne with her mum.

For the last six months of Mum’s life she was in a home. I had hit a brick wall and simply couldn’t go on. I felt I was betraying her. But the home was wonderful. Mum seemed to love it and I got something of my life back. Music was one of the activities available and I have warm and vivid memories of Mum gleefully banging drums and la-la-ing to Christmas carols.

Mum died in 2009. Four years later I am beginning to put it behind me. The cost of dementia is not paid only by those who have this terrible condition. All I want for Christmas is a cure for it.

This is why I am giving 5% of my royalties from my book (Keeping Mum: Caring for Someone with Dementia) to Alzheimer’s Research UK. It’s also why I am delighted to be made a Champion of ARUK and to speak on their behalf whenever and wherever they ask me. Dementia costs our country £23 billion pounds every year, yet we spend only £61 per person with dementia per year on trying to cure it (compared with £295 per person with cancer per year). Do join me and give whatever you can to help beat dementia.

Oxford philosopher and writer Marianne Talbot lost both her parents to dementia. After her father died with vascular dementia, her mum, Lesley, was diagnosed with Alzheimer’s disease. Marianne brought Lesley to live with her and looked after her for five years before making the hard decision to put her into care. She published a book entitled Keeping Mum: Caring for Someone with Dementia, which chronicles their experience together, and a percentage of the proceeds are donated to Alzheimer’s Research UK. An accomplished public speaker, Marianne has spoken on many occasions at events and through the media to raise awareness of the need for more funding for research.
View all posts by Marianne Talbot →

5 Responses to The sound of dementia