As I’m new to Alzheimer’s Research UK and a social scientist, I’ve got a lot to learn about the biology and pathology behind the disease.

With this in mind, I braved the traffic of inner Cambridge and visited the The Laser Analytics Group led by Prof Clemens Kaminski, based in the Department of Chemical Engineering and Biotechnology at the University of Cambridge.

The lab is the result of a wonderful marriage (literally – Prof Kaminski is married to a biologist who also works in the lab). It has brought the worlds of physics and biology together to both develop high tech laser microscopes, and, crucially for Alzheimer’s Research UK, use these cutting edge microscopes to focus on key basic biology. In the case of the research we fund it is the propagation (spreading from cell to cell) of tau proteins to understand how these may impact on Alzheimer’s disease. 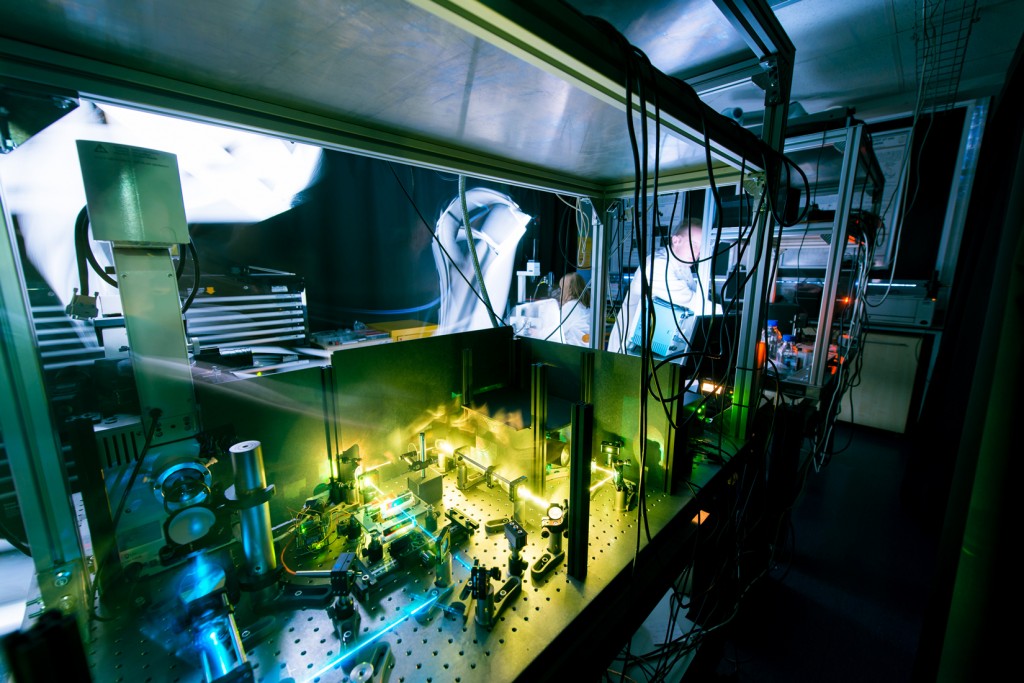 Laser microscopes allow researchers to view Alzheimer’s proteins in greater detail and clarity than other equipment.

What are tau proteins?

Tau proteins are proteins that stabilise microtubules, which basically means they hold together the structure of a cell. Problems occur when these proteins break away from the cell structure and begin to accumulate in the brain. They then begin to tangle together and form clumps, which are involved in the development of Alzheimer’s disease as they increase in number. At the moment no one is sure exactly how, why, or the extent to which tau proteins cause Alzheimer’s disease.

The work of Prof Kaminski ‘s group is at the forefront of developing our understanding. We were given the tour by Dr Claire Michel, one of the biologists in the group and a great communicator. She explained the work they are doing to understand some of the questions around how the tau proteins leave the microtubules and how they form into the tangled clumps both within and outside of cells in the brain.

As the title of the blog suggests we don’t yet know fully the extent to which tau is responsible for the onset of Alzheimer’s, but we can be sure that The Laser Analytics Group will help us know a lot more in the near future. This is why Alzheimer’s Research UK are proud to fund some of the work of the Group, and many other research groups like it; because only through cutting edge research will we finally find a cure to the disease.