You are here: Home > The Alzheimer’s Research UK Drug Discovery Alliance
By Dr Emma O'Brien from Science news on 4 December 2015 3

In February 2015 we launched our £30 million Drug Discovery Alliance. The Drug Discovery Alliance is a network of three Institutes at the Universities of Cambridge and Oxford, and University College London. The Alliance is one of the largest coordinated efforts in the world to find new treatments for dementia and today, we’ve announced the drug discovery experts who will lead that search.

What is a Chief Scientific Officer? 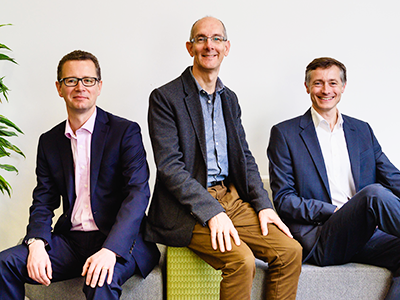 Our Chief Scientific Officers (CSOs) will lead scientific progress at each of the Institutes, working with researchers across the UK to zero in on promising new approaches to treat the diseases that cause dementia. Dr John Skidmore, Dr John Davis and Prof Paul Whiting, at Cambridge, Oxford and UCL respectively, have over half a century of drug discovery experience between them. They will guide the work of their individual Institutes, but also collaborate to ensure efforts are coordinated and that their teams are pursuing many different approaches.

What research will take place in the Drug Discovery Alliance?

There hasn’t been a new treatment licensed for Alzheimer’s since 2002 and many people with other causes of dementia have no specific treatments available to them. We’ve discussed the failure rate of clinical trials for Alzheimer’s disease in the past, and our CSOs will now take an innovative approach to re-energise the search for new treatments.

They’ll test approaches previously unexplored for dementia by the pharmaceutical industry and this means searching far and wide for the best ideas from the research community. They’re seeking out targets. A target is a protein or pathway that plays a role in the course of the disease and that we can modify with drugs to help halt damage in the brain. Sometimes a protein may be a lynchpin in a biological cascade that leads to nerve cell damage. But other times, a protein may just be an innocent bystander in the huge number of biological events that are triggered in the disease. Our CSOs have the challenge of selecting the most promising targets to pursue and building drug discovery projects around them.

Drug discovery involves many different steps and unites expertise from across biology and chemistry. The biologists working in our Drug Discovery Alliance will study new targets in depth, to confirm the role they play in the diseases that cause dementia. They’ll also design and create biological tests to measure the impact of modifying these targets with experimental drugs in the laboratory.

It’s the chemist’s job to create these experimental drugs. Unfortunately, drug design isn’t as simple as making a key that fits a lock. Chemists have to make thousands of subtly different chemical compounds that fit the target and alter its function, in order to find the perfect match with all the right qualities.

Eventually, a compound will make it all the way through the cascade and this will be the compound that scientists develop further to make a drug. It’s called the ‘lead compound’ and it now has to go through further development and tests in animals before it can enter clinical trials. These tests are designed to see how safe the experimental drug is in a living organism and how well it is absorbed and broken down in the body.

The Drug Discovery Alliance will focus on the early stages of drug development, creating lead compounds and then working with industrial partners to push these promising leads through further development towards clinical testing.

Dementia is a huge medical challenge and we’ll only beat it with big research ambitions. We’re excited to welcome our new Chief Scientific Officers on board to capitalise on the innovative ideas and discoveries from across the research community and translate them quickly into potential new treatments for people with dementia.