You are here: Home > When Alzheimer’s steals your sight
By Tim Shakespeare on 17 September 2013 5

What is posterior cortical atrophy?

Posterior cortical atrophy (PCA) is a rare condition most often caused by Alzheimer’s disease but surprisingly, despite often having the same underlying disease, people with PCA have a striking difficulty in seeing what and where things are, while their memory for recent events can still be very good.

The visual symptoms aren’t caused by damage to the eyes, instead people with PCA have damage to areas at the back of the brain called the parietal and occipital lobes. This damage means the brain can’t interpret visual information from the eyes properly, making complex visual tasks like driving and reading particularly difficult. Other skills that rely heavily on the back of the brain, for example spelling and calculation, can also be affected early in the disease.

Why is it important to research PCA?

Practically, we need to research PCA in order to improve the diagnosis and care available for patients and their families and to improve awareness and understanding among healthcare professionals. Because PCA is rare and typically symptoms start in the 50s or 60s (earlier than usual for Alzheimer’s disease), diagnosis is often delayed and problems can be misattributed to anxiety, depression or problems with the eyes. The hope is that by carrying out research and communicating with doctors who may come across patients with PCA, it will become easier for people to get an accurate diagnosis quickly.

Scientifically, PCA raises an interesting question – how can Alzheimer’s disease affect different people in such different ways? This project is a unique opportunity to study PCA and examine what happens in less typical forms of Alzheimer’s. We want to understand why different areas of the brain may be more susceptible to Alzheimer’s, which could explain rarer forms of the disease, but also help to explain more generally why some people are vulnerable to Alzheimer’s and some people aren’t. Recent evidence suggests that the disease may target particular brain areas and the connections between them (known as brain networks). This project provides the opportunity to investigate changes to these connections, and how they differ between different forms of Alzheimer’s.

What’s involved in this project?

The brain is made up of a layer of ‘grey matter’, containing the main cell bodies of brain cells, and underneath that is the ‘white matter’ – the bundles of cables that provide crucial connections through the brain. We know a lot about how the brain’s grey matter is affected by Alzheimer’s, but much less about changes in the white matter. 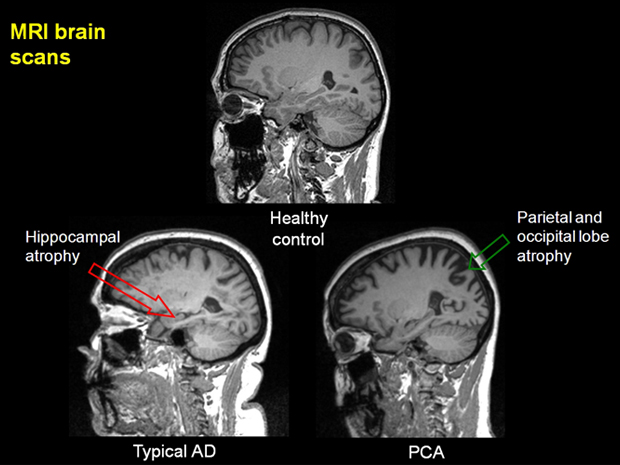 This project will use a particular brain imaging technique called diffusion tensor imaging that can detect changes in the white matter of the brain. By comparing people with PCA, typical memory-led Alzheimer’s disease and healthy individuals, and investigating changes over time, we hope to improve our knowledge of how the disease spreads through the brain. A better understanding of how white matter is affected in Alzheimer’s may provide new ways of measuring how well therapies work, and could lead to a better understanding of what makes people vulnerable to Alzheimer’s.

Who, where, how much?

I’ll be carrying out the work at the Dementia Research Centre, part of the Institute of Neurology at UCL, under the supervision of Dr Sebastian Crutch and Professor Nick Fox. The Alzheimer’s Research UK research fellowship provides funding of £152,746 to cover research costs for three years.

If you’re interested in finding out more about PCA, you can read an open-access scientific review or visit the support website for people with PCA, run by UCL.

5 Responses to When Alzheimer’s steals your sight