Dementia is the most feared diagnosis in the over 55s in the UK, affecting around 850,000 people across the country. You often ask us why some people develop the condition and others don’t, and whether it’s possible to predict who will go on to get dementia.

Predicting who will develop dementia is not an easy process. Risk factors for diseases like Alzheimer’s (the most common cause of dementia) are hugely complex and include age, genetics and lifestyle. These three influencers don’t act alone either – they interact and are likely to vary in importance at different stages of your life.

Understanding who is most at risk of diseases like Alzheimer’s and why, is key to shaping prevention initiatives but also for identifying those who may benefit most from future therapies. Here are just a few examples of the groundbreaking research in this area being presented at the Alzheimer’s Association International Conference in Toronto.

In the UK, 61% of people with dementia are women. Why is this?

Well women live longer than men and as age is a risk factor for dementia, we would expect more women to be living with the condition. But some studies have suggested that women may also have a higher risk of dementia than men, particularly those in their 80s and older.

In Sunday’s ‘Gender and Alzheimer’s’ session at the AAIC2016, it was clear that the jury is still out on whether women are more at risk than men. A 2016 meta-analysis pooling data from 22 studies reported an increase in risk for women but the researchers could not rule out that this observation was due to chance.

However, it was also clear from the session that risk factors for dementia are likely to affect men and women differently. And this is important to explore.

There could be a role for hormones such as oestrogen, which decreases in women with age. Dr Gillian Einstein from the University of Toronto showed that women who had their ovaries removed at an early age had a higher risk of dementia later in life. Structural and functional differences between the male and female brain could also influence diseases like Alzheimer’s and we know that the Alzheimer’s risk gene APOE4 confers a higher risk in women than men. We also heard evidence that the influence of midlife cardiovascular risk factors may be higher for women.

Research from the Mayo Clinic in Florida presented this week also suggested that men may present with Alzheimer’s at a younger age and with more atypical symptoms, making misdiagnosis more common in men, muddying the water when trying to understand any sex differences in rates of the disease.

Many studies have shown that some people can be walking around with lots of Alzheimer’s-related damage in their brains with no symptoms. Similarly, there are those who have very little damage, but it’s already having a large impact on their ability to live their lives. Why this discrepancy?

Researchers believe that some people have ‘resilience’ to damage from diseases like Alzheimer’s. That despite the build-up of damage through wear and tear to blood vessels or the build-up of abnormal proteins, certain people’s brains can adapt and compensate – allowing that person to function normally for longer.

There were many studies presented in Toronto exploring the mechanisms underpinning this resilience. This included education level, a well-established factor associating with dementia risk, but also occupational complexity. A US study found that people with more complex occupations involving interaction with people appeared be able to function at a higher level in the face of brain changes associated with blood vessel damage and Alzheimer’s.

“Mental stimulation and social interaction can both be found outside the workplace and these can be important parts of an active lifestyle that can help to maintain brain health.”

Another study looked at people who didn’t develop Alzheimer’s despite being at high genetic risk. By studying their genetic code, a team from Brigham Young University in Utah identified a version of a gene called RAB10 which was associated with a greater resilience to damage in Alzheimer’s.

We know that the risk factors for dementia are varied and we’ve outlined just a few of the factors here that might influence risk in different individuals. Here, we are just skimming the surface of research looking into dementia risk across the world, but we know more needs to be done.

Prof Carol Brayne from the University of Cambridge, whose research you have helped to support, took to the main stage yesterday to discuss her findings that dementia risk may be changing across generations. In April, we blogged about her findings; that incidence of dementia in men over 65 has fallen by 20% over the last two decades. Interestingly the incidence rate in women stayed level. Prof Brayne showed data from several other Western countries suggesting a reduction in the number of new cases of dementia. 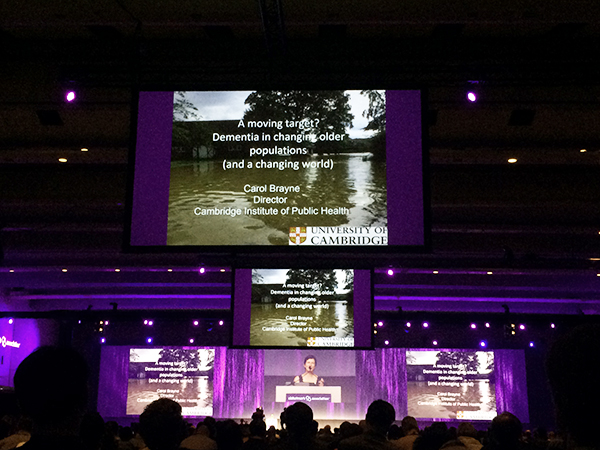 Understanding what might be driving these population-level changes is important. Prof Brayne highlighted that drops in salt intake, blood pressure and deaths from coronary heart disease in the UK in recent years could have played a role. There is also evidence that height and brain size are increasing across the generations, as well as IQ.

Future research from the Cambridge team aims to unpick some of the reasons behind these changes in risk across populations. This insight will help to shape public health approaches to improve brain health and support people to live for longer into old-age with independence, good health and a high quality of life.

Tagged with: AAIC 16
The immune system – a wolf in sheep’s clothing in Alzheimer’s?
Silver lining for first anti-tau Alzheimer’s treatment in phase III?