At Queen Square Brain Bank we receive, on average, 80 brains per year affected by many diseases, including Alzheimer’s disease, frontotemporal dementia and Parkinson’s disease. During life, clinicians work hard to provide an accurate diagnosis based on the symptoms a person shows and clinical tests, often including brain imaging studies. However, as there are similarities between some diseases, only examination of the brain after death, including looking at it under the microscope, can confirm that a correct diagnosis that has been given during life. Once a precise diagnosis has been made we can then use the brains for scientific research.

The brains provide us with an important opportunity to look at what has gone wrong in different diseases compared to normal brains. From the generosity of the people who feel they are able to donate their brains, we can study what has gone wrong and potentially identify how these diseases can be treated.

What will happen to my brain?

Brains donated to Queen Square Brain Bank arrive from a hospital mortuary. Here in the laboratory they are divided in two; one half is placed in formaldehyde and left to become “fixed”, preserving the cells in the tissue, and the other half is dissected into small pieces, frozen very rapidly and stored at -80°C. The frozen half is only used for research, whilst the fixed half is used for both research and diagnosing the disease that was present.

The half that is placed in formaldehyde is fixed for three weeks, after which time a brain bank neuropathologist dissects areas of the brain into small blocks and makes a preliminary diagnosis based on the features that they can observe by eye. The blocks are then processed through different chemicals, embedded into wax and cut into thin tissue sections, which are then examined under a microscope for signs of different diseases. The microscopic examination usually confirms the preliminary diagnosis, and the family will be informed if they have expressed a wish to know what disease their relative had.

When the diagnosis is complete the tissue is then available for study, here at UCL Institute of Neurology and at other collaborating research departments throughout the UK and worldwide. Brain tissue is available to researchers who use the tissue for genetic research, further analysis of the disease process and to investigate potential biomarkers – particular disease traits that could be used to help diagnosis.

How can looking at brain tissue help us identify genetic abnormalities?

In my own research, I have looked at over 150 brains from the Queen Square Brain Bank which are affected by different types of frontotemporal dementia (FTD). FTD is the second most common form of early-onset dementia after Alzheimer’s disease. The disease is caused when nerve cells in the frontal and/or temporal lobes of the brain, which control behaviour, planning, language and memory, are affected by abnormal changes and eventually die. As FTD is a large group of diverse diseases, which can have several different underlying disease processes, it is essential to examine the brain after death to either confirm or correct the clinical diagnosis – as each different type of FTD shows different abnormalities under the microscope. 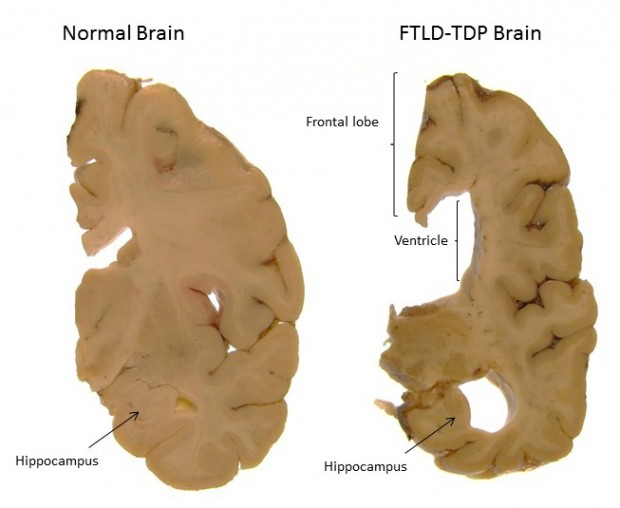 Healthy brain compared to a brain affected by FTD. The FTD brain shows shrinkage of the frontal lobe (at the front of the brain, the region that is affected first in FTD), and of the hippocampus (a brain region important for memory). Brain shrinkage has also caused the ventricle (one of the spaces in the brain that usually contains cerebrospinal fluid) to become larger.

Genetic abnormalities have been found to cause FTD in some people, and these can include changes in the MAPT gene, progranulin gene and the recently identified C9orf72 gene. Until recently, however, only one genetic abnormality has ever been associated with each individual case.

Brains from people carrying the abnormal C9orf72 gene are interesting because we are able to identify them easily down the microscope, before genetic testing has been carried out. By examining the brain tissue from cases carrying this genetic mutation, pathologists have identified unique abnormal structures in the brain that are only found in these cases.

Microscopic images of the cerebellum (a region of the brain that’s important for motor control) and the hippocampus (a region important for memory) of a person with FTD. There are unique structures in the brain that can be used to identify the C9orf72 genetic mutation – these are shown in green. The TDP-43 protein is shown in red, sitting within the cell nucleus (shown in blue).

At Queen Square Brain Bank, all our FTD cases were screened for these unique structures. It was during this screening process that two FTD cases – which were already known to have a mutation in the progranulin gene – were also shown to contain the unique hallmarks of a mutated C9orf72 gene. This finding then led us to check these two cases genetically to confirm the observations seen down the microscope: for the first time we have found cases of FTD where two genetic mutations are involved.

The results of our research demonstrate the value of analysing brain tissue in this way: we now know we should screen all FTD brains for every known genetic mutation, especially as the results of genetic testing have clear clinical implications in terms of genetic counselling for family members.

Dr Tammaryn Lashley is an Alzheimer’s Research UK funded research fellow based at Queen Square Brain Bank at the Institute of Neurology, part of University College London. Tammaryn has been working at Queen Square Brain bank for 15 years concentrating her research on underlying disease processes in dementia. Her fellowship focuses on the frontotemporal dementias and identifying unique changes that occur in this large, diverse group of dementias.
View all posts by Tammaryn Lashley →

2 Responses to Why donate your brain?