You are here: Home > 40 years running a post office – Alzheimer’s robbed my mum of the retirement she deserves
By Ian Elliott on 19 June 2018 0 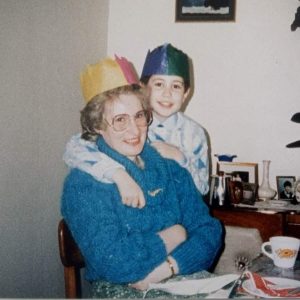 My mum and dad married in 1965. My mum worked in the NHS at the time. She was respected and liked by all staff in the Robinson Memorial Hospital. By all accounts she was on track to a senior administration post in the health service.
During the day she would work in the hospital and at night would help my dad, uncles and friends to build the family home just outside the town of Ballymoney in Northern Ireland.
In 1973 my brother came along. There was no maternity leave entitlement back then, which meant my mum had to leave her job in the NHS. Instead she took up a part-time position in the nearby rural sub-post office.

My brother started primary school and then I came along. My mum was by now sub-post mistress and looked after us during the day alongside running a very busy sub-post office and shop.
I remember people queuing outside the post office early in the mornings. It would often be opened before 8am and seemed to never shut. When it was shut people would ring the doorbell. Day and night mum would always answer – always putting her customers and the community before all else, fuelled by a bottomless tea cup.
Holidays were restricted by the needs of the post office. So bank holidays would be used in order to get a long weekend. Every now and again there would be a trip to Scotland or to different parts of Northern Ireland. But we’d always have to be back in time for opening the post office. Sick days were even rarer.
Any money that was saved went to furthering mine and my brother’s education – piano lessons, singing lessons, private tuition, Encyclopedia Britannica (Google it!). Anything that would help us succeed in life.

In the late 1990s the post office was robbed. Masked men entered the house. My mum was tied up with cables pulled from the back of our old TV set. A gun held at her head. But she wouldn’t give away the keys to the safe and instead tricked the masked gunmen into sounding the alarm. They were caught. My mum continued to serve the community. A new alarm system and safe were installed at personal expense. We got a dog.
My mum continued to run the post office for many years while both me and my brother moved out, went to university, got jobs and families.

Over time her memory started to fade. Then her mood changed. Then things that she’d always done, like washing the kitchen floor every night, stopped being done. I didn’t notice at first. Then it became hard to ignore. Running the post office eventually became impossible. After forty years of continuous service it closed.
Later, even living at home became impossible. Too dangerous, and too onerous on my dad, who had his own health problems to manage.
My mum now lives happily in an amazing care home (paid for by her pension and life savings). It’s not a life she chose, it’s a life dictated by Alzheimer’s disease.
My mum doesn’t have the retirement she deserves after more than 50 years of working life. She hasn’t got to know the grandchildren she always wanted. She doesn’t get to play and look after them as she would like. The crippling nature of dementia has stripped all that away. 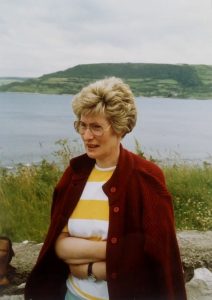 She is happy, happiest in the company of visitors, and there are still wonderful moments of clarity and lucidity. But so much has been lost.
Looking back now I can’t help thinking of the endless sacrifices she made but at the same time I know that to her it wasn’t sacrifice – it was love.
This is why I am raising money for Alzheimer’s Research UK by taking part in Running Down Dementia.
The challenge is to run 100km before the end of August and raise £100. But I’ve been so amazed by how much I’ve raised so far, I’ve decided to double the distance.
Dementia, most commonly caused by Alzheimer’s disease, affects a huge number of people but doesn’t get the profile it deserves. It’s so important that there’s more research to help find new treatments.

A cure would be fantastic, but even a treatment which reduced my mum’s symptoms, allowing her to stay in her own home for longer, stay in her community for longer and be able to have a more active relationship with her grandchildren, would have made such a difference. 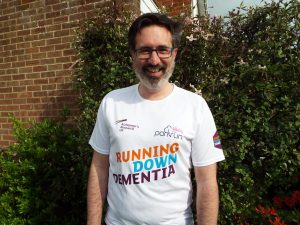 To sponsor me go to https://runningdowndementia2018.everydayhero.com/uk/ian-4
I’d also encourage other people to sign up for Running Down Dementia. It’s such a good idea as it’s so achievable, even for someone who hasn’t run before or someone, like me, who hadn’t run in years. It seems like a big target, but when you break it down anyone can do it.
To sign up go to www.runningdowndementia.org/register

Ian Elliott is a 39-year-old father-of-two who lives in Balerno, near Edinburgh. He is a senior lecturer in business and public services at Queen Margaret University. Ian is one of the top fundraisers for Running Down Dementia in 2018 having been inspired to take on the challenge by his mother who has Alzheimer’s disease and is now living in a care home near Coleraine in Northern Ireland.
View all posts by Ian Elliott →