Alzheimer’s Research UK funded scientists, along with scientists from across the world, have met in Copenhagen to share findings and discuss new ideas in the field of dementia research. Here are some insights into Day 1 of the conference. 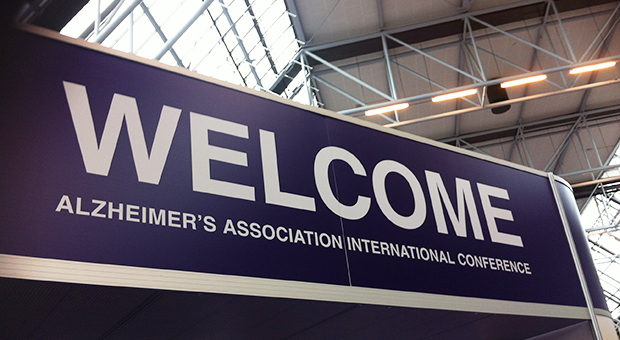 We spoke to Dawn Lau, whose PhD is funded by Alzheimer’s Research UK. Her work focuses on the culprit Alzheimer’s protein tau and its role in Alzheimer’s. By understanding how the protein spreads from cell to cell, she hopes her work will lead to new ways to slow the disease. Hear Dawn talk more about her work and why conferences are a great opportunity for young scientists:

There was also a busy session on genetics, where we heard how global research teams, including Prof John Hardy and Dr Rita Guerreiro at University College London, are pooling expertise and samples. They are studying genetic risk factors in thousands of families affected by late-onset Alzheimer’s.

As well as discovering the TREM2 gene in Alzheimer’s in 2012 and linking the PLD3 gene to the disease in 2013, this global research team has now linked another risk to Alzheimer’s. It was also great to see researchers working hard to learn more about the TREM2 gene. Discovered with help from your donations, it was hailed ‘one of the greatest genetic findings in Alzheimer’s in two decades’. Understanding what the gene does and why it increases the risk of Alzheimer’s will help scientists make progress in tackling the disease.

Brain scans are one of the tools used to diagnose Alzheimer’s disease and researchers are looking at new ways to use them to study changes in the brain – especially the build-up of Alzheimer’s proteins amyloid and tau.

Scans have been developed to detect the build-up of amyloid in the brain. 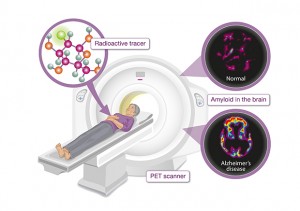 While amyloid scans can give clues as to what is happening in the brain, amyloid levels don’t always correlate well with someone’s thinking and memory skills. A team of scientists from Japan are developing ways to study the build-up of tau in the brain in Alzheimer’s. They reported that regions of the brain with lots of tau also appeared to have the most damage. They hope that imaging tau will give a much better idea indication of what stage of Alzheimer’s someone has and help in the detection of the disease.

There was a lot of discussion yesterday about potential new treatments for Alzheimer’s. Some scientists have been focussing on treating the symptoms of Alzheimer’s. Many of the problems with memory and thinking experienced by people with Alzheimer’s are due to damaged nerve cells losing the ability to communicate with each other.

Two research teams presented their work to develop new drugs that stimulate nerve cells to communicate. One approach involves increasing the amount of the chemicals that carry information between nerve cells. Another approach used a drug which helps nerve cells respond to signals from other nerve cells. Both treatments seemed to improve memory and thinking in people in early clinical trials.

Research like this is important to alleviate some of the most distressing symptoms of Alzheimer’s disease. However, it is also important to find treatments that stop the damage caused to nerve cells in the first place.

To tackle this problem, a team of scientists in the US presented their theory that breaking down tau protein in the brain could slow the development of Alzheimer’s. To break down tau, the researchers used an antibody – a biological molecule that only binds tangles of tau inside the brain. They showed that this antibody encourages the break-down of tau and stops the spread of these toxic tangles through the brain. The next step will be to find out if this stops damage in the brain in Alzheimer’s and slows memory decline in people with the disease.

We also heard about a clinical trial of a second drug designed to target tau, being tested in about 200 people with frontotemporal dementia (FTD). This is the first clinical trial in FTD that aims to alter the course of the disease rather than just treat the symptoms, so we look forward to hearing the results of this trial in a few years’ time.

Conferences are a great opportunity for researchers to share ideas and build collaborations to help us make progress faster. Alzheimer’s Research UK-funded scientist Glynn Jones from the University of Aberdeen was presenting his work. He told us why conferences are so useful:

There was also lots of discussion about dementia risk factors and prevention. You can read more on our blog In the news: Can we prevent Alzheimer’s?

Join us tomorrow for more of the latest findings in the field of dementia research.

In the news: Can we prevent Alzheimer’s?
Research round-up: AAIC Day Two

One Response to Research round-up: AAIC Day One