You are here: Home > All you need to know about smoking and dementia
By Katie Puckering on 13 January 2020 0

The World Health Organisation estimates that 14% of cases of dementia worldwide could be caused by smoking.

While the number of adult smokers in the UK has dropped significantly in recent years, around 7.2 million people in the UK still smoke.

Most people know that smoking leads to poor health and a substantially increased risk of cancer and lung disease. But what’s the link to dementia?

Dementia is a word used to describe a group of symptoms, most commonly memory loss, confusion and problems with communication. It occurs when brain cells stop working properly and is caused by diseases, most commonly Alzheimer’s disease and vascular dementia. 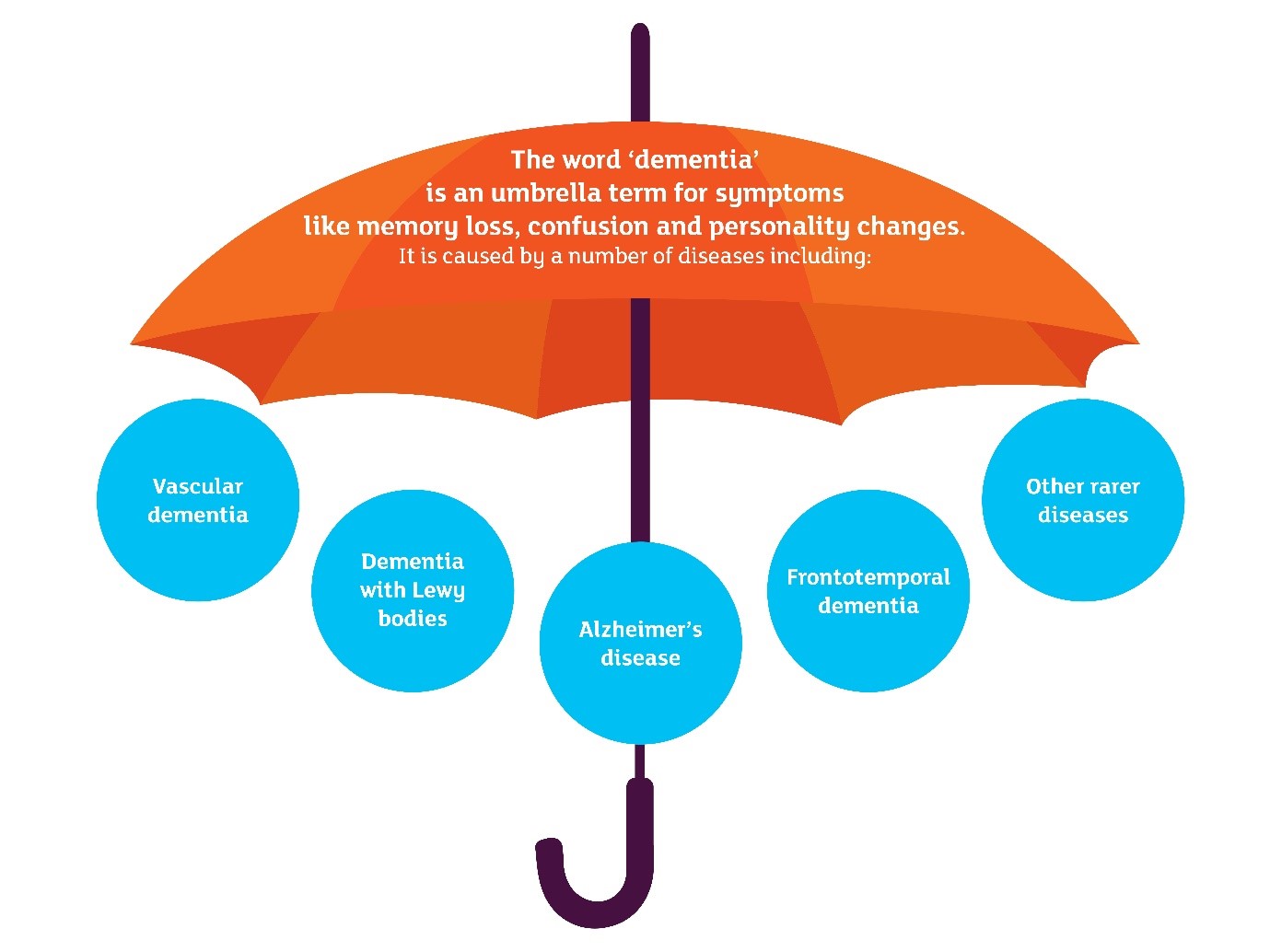 These diseases cause brain cells to die faster than they would when compared to brain changes related to normal ageing.

In the UK 850,000 people have dementia. Over 90% of these cases are late-onset dementia (in people over the age of 65) and are a consequence of complex interactions between genetic, environmental and other health risk factors.

Alzheimer’s disease is characterised by the build-up of two proteins, amyloid and tau, leading to a loss of connections between brain cells, eventually causing them to die.

Research has identified more than 20 genes associated with a higher risk of Alzheimer’s disease. These genetic factors interact with environmental and health risk factors to further increase our risk of developing the condition.

Vascular dementia is caused by damage to the blood vessels in the brain, which reduces blood flow to brain cells and affects how they work.

About 20% of people who have had a stroke, develop stroke-related dementia in the following six months. Another form of the condition, called subcortical vascular dementia, happens when there are changes to the very small blood vessels in the brain, often called small vessel disease.

These disease processes in the brain are tightly connected to what’s happening more widely in the body. And for that reason, what damages the body is highly likely to impact what’s happening in our brains too.

Smoking is associated with an increased risk of dementia. A 2019 Lancet Commission on dementia prevention ranked smoking as third among nine modifiable risk factors for dementia.

A large study carried out in Finland found that people who smoke heavily in midlife more than double their risk of developing Alzheimer’s disease or other forms of dementia two decades later.

Research has also found that, compared to light smokers, the risk of Alzheimer’s disease was significantly higher among medium to heavy smokers. This suggests a possible dose-response relationship between how much someone smokes and their chances of developing Alzheimer’s i.e. the more you smoke, the higher your risk.

Currently we don’t fully understand the reasons why smoking increases the risk of dementia.

But we do know that inhaling tobacco smoke has been linked to oxidative stress. Oxidative stress is an imbalance between toxic molecules inside our cells and the antioxidants we need to remove them. This imbalance causes damage to cells in our body. Research has found that oxidative stress itself is connected to the onset of dementia.

Smoking also increases the risk of developing other risk factors for Alzheimer’s disease and vascular dementia such as stroke and high blood pressure, in addition to being a risk factor in itself. Smoking damages the structure of your blood vessels, making it harder for blood to flow freely around the body and into the brain. It also reduces the oxygen level in your blood.

The brain uses around 20% of the body’s oxygen supply from blood, which means anything stopping the brain from getting an oxygen-rich blood supply is stopping brain cells from getting the nutrients they need to survive, thrive and resist damage. 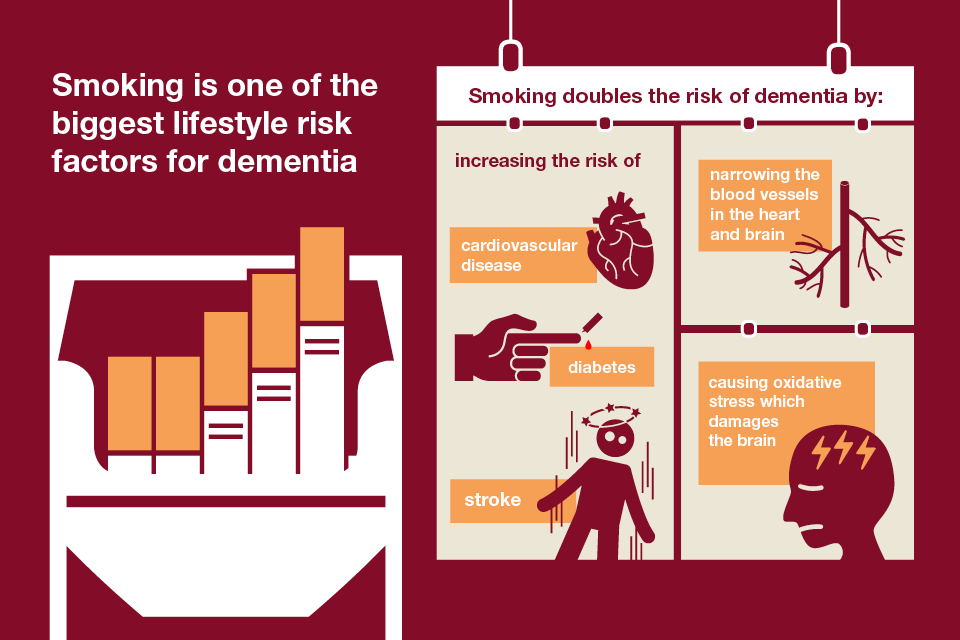 We can’t change our age or our genes, and there is currently no way we can completely prevent dementia. However, there are some simple steps we can all take to help lower our risk.

Looking after your health by stopping smoking will help lower your risk of cardiovascular disease and dementia. Other behaviours associated with good heart and brain health include being physically active, eating a healthy balanced diet, maintaining a healthy weight and, if you drink alcohol, drinking within NHS lower-risk guidelines.

While it’s never too late to make positive changes, keeping your heart healthy in your forties and fifties seems to be particularly important for helping to reduce your risk of dementia.

Will stopping make a difference?

Stopping smoking and keeping other modifiable risk factors in control, especially in middle age, can help to reduce the risk of dementia. It’s never too late to stop smoking, but research has found that the earlier you do it, the greater the benefits. A 50 year-long study of British doctors who stopped smoking at age 60, 50, 40 or 30 respectively, found they gained 3, 6, 9 or 10 years of life expectancy.

There are many good health reasons to stop smoking – you will not only reduce your risk of cardiovascular disease and dementia, but also lung disease, cancer and other illnesses.

Getting expert help from your local stop smoking service can boost your chances of giving up smoking successfully by three times. The Smokefree National Helpline is free to call on 0300 123 1044 or talk to your GP for advice. You can find out more at www.nhs.uk/smokefree

This blog was written in conjunction with Action on Smoking and Health (ASH). ASH is a campaigning public health charity that works to eliminate the harm caused by tobacco. The blog was based on content from their fact sheet which you can view here ASH fact sheet: Smoking and dementia

View all posts by Katie Puckering →