You are here: Home > Alzheimer’s Research UK and the launch of our Manifesto
By Dr Matthew Norton on 29 September 2015 0

Late September and early October saw the latest series of autumn party conferences, these are the first party conferences since the general election and, particularly in the case of the Labour Party, see a chance to review current positions and present a new approach for the next five years of parliament.

At Alzheimer’s Research UK we use party conferences to take our message to MPs and Peers, and particularly those in the Ministerial and shadow Ministerial teams with responsibility for dementia research – Health and Business.

To do this we have taken our first ever stand to conferences:

We’re up and running for day three of #lab15. Come visit us at stand 101 and hear more about the work of @ARUKnews pic.twitter.com/fy5ikIaT87

If you’re at #Lab15, be like @jonsnowC4 by visiting our stand & play our arcade game to try to top our leaderboard pic.twitter.com/3M3B8zxtNL

We hope you agree it is very effective at raising awareness of the organisation and the need for investment in dementia research, not just from government, but from all parts of the sector including charities and the pharmaceutical industry.

Alzheimer’s Research UK are doing our part by committing to raise £100m over the next five years, £30m of which will be spent on three Drug Discovery Institutes at the Universities of Oxford, Cambridge and UCL.

It is also important that the pharmaceutical industry are acknowledged as a key part in in the process. A drug for dementia is likely to cost in the region of £1bn to develop and it would be impossible to do the very expensive clinical development of a drug, without the role of industry. This is why we are working in partnership with Jansen, Lilly and Pfizer on the stand, to promote the message that the only way we are going to defeat dementia is through a collective, sector wide effort.

The power to defeat dementia

Before the election we launched our manifesto, The power to defeat dementia. This set out what we wanted to see the new Government achieve during the current parliament. We are now using this document as a yardstick to hold the government to account and push for progress in dementia research.

The manifesto sets out five key steps that we believe will move us ever closer to a disease-modifying treatment and ultimately defeating dementia: 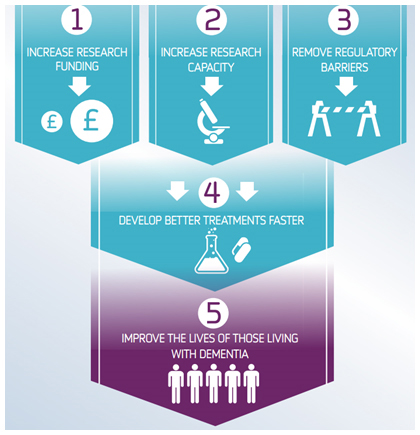 Although there has been a lot good progress made over the last parliament and government funding has doubled between 2012 and 2015, we were starting from a very low base.  It’s important we see greater investment and this leads to more researchers in the field – government funding acts as a great catalyst for further private investment. We also need to have more of this investment focused on drug discovery, so that we are pulling promising compounds through to tests in patients as quickly as possible.

If you’d like to help us get our message to government then please sign up to be a campaigner. There’s lots you can do.  This isn’t always attending meetings or coming to London, but can be things like writing to your MP, or attending local meetings and making the case for Alzheimer’s Research UK. These are often things that many of you may well already do, but we will try to coordinate this to harness the power of the collective voice.

Dementia in the future: what’s in store for our children?
Spotlight on frontotemporal dementia