You are here: Home > Another year, another marathon
By Michelle White on 3 March 2017 0

Last spring, Michelle White pulled on her trainers, donned her running vest and took on the London Marathon. She raised an incredible sum of over £4,000 for Alzheimer’s Research UK, having seen the devastating impact of dementia in her family. Despite the pain and exhaustion, she’s signed up to do it again in 2017. We found out why…

Ever since I watched the London Marathon as a little girl, it was always something I’d dreamed of doing. However, as I got older I realised more and more that it was becoming less and less achievable. Although I enjoyed running, I couldn’t get past my twice-weekly 5K runs. Then one day at work two years ago, my boss asked me if I would do a half marathon with her. I agreed and once I realised I could run further than 5K, I was hooked and determined that I would fulfil my childhood dream! 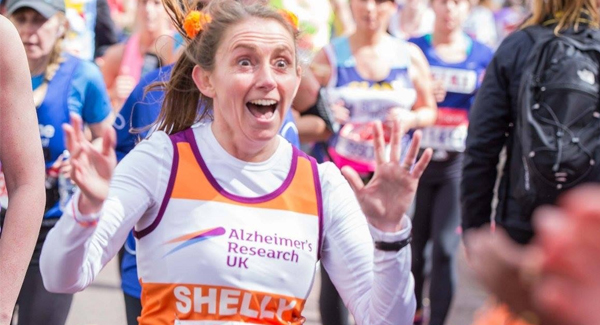 It is sometimes difficult to find the motivation on cold, wet mornings to lace up the trainers and get out of the door. This is when I have to remind myself that my main reason for doing the marathon is no longer just to fulfil a dream but to make a real difference in the battle against dementia. My friends and family have been so incredibly supportive and generous with their donations. I feel that I would be letting them down by not doing my part and pounding the pavements to get strong enough for marathon day.

The atmosphere on the day of the race was like nothing I have ever experienced. There was a real buzz from the moment I boarded the DLR for the journey to Greenwich – chatting to other runners and hearing their stories. I remember vividly walking to the start with a 79-year-old man who was running his fifth marathon and he was determined to make it his best, as it was in memory of his beloved wife who had passed away a few months before. He tried to give me a few hints and tips as he realised just how nervous I was! The nerves started to melt away and I was taken over by pure excitement, especially as I saw lots of Alzheimer’s Research UK vests belonging to people I had met at the pre-event and through the online group. It really felt like we were all in this together! Once we were off, the encouragement around the streets was amazing – I felt like a superstar.

At around 23 miles I really started to tire and remember thinking ‘never again!’ But then at 23.5 miles I saw (and heard) the fantastic Alzheimer’s Research UK cheer squad, and had a little cry as, once again, I was reminded of why I was doing this. I thought of my mum who was no longer able to walk, let alone run, lying in her bed, and did the final three miles purely for her. I was aching, I was exhausted, but as I rounded Buckingham Palace and saw the finish line I knew right then that I had to do this again. This was backed up completely by the euphoria I felt as the finisher’s medal was placed round my neck. I recommend doing the London Marathon to everyone I speak to. The feeling of personal pride is enormous, as is knowing that you have played a part in raising money for such a worthwhile cause. 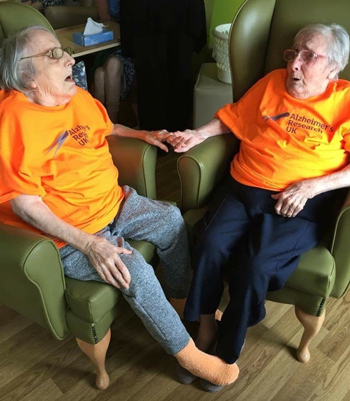 I chose Alzheimer’s Research UK as my charity because I feel so strongly that we need as much research as possible to beat this vile disease. I saw other charities, equally as worthwhile, spending enormous amounts of money on research and felt that dementia was getting left behind. My personal reasons are that my grandmother died from Alzheimer’s disease around 25 years ago, when very little was known about dementia. Then 14 years ago, my mum, and a little later her twin sister, were both diagnosed. It was then that I looked into it further and, although there are some amazing charity support groups out there, I really wanted to focus on research so that one day more families can be spared the pain and trauma of watching a loved one deteriorate as Alzheimer’s progresses.

Unfortunately, my mum lost her battle last summer. This has given me the drive to do as much as I can, for as long as I can, to support this amazing charity – including another 26.2 miles this April!

You can help Michelle reach her fundraising goal here.

Would you like to support Alzheimer’s Research UK by taking part in a sporting event? Take a look at our events calendar here.

Michelle White is a keen runner and fundraiser for Alzheimer's Research UK. She sadly lost her mum to Alzheimer's in 2016, and is determined to do all she can to stop other families going through the same.
View all posts by Michelle White →