You are here: Home > Behind the Headlines: A 20% drop in UK dementia incidence rates
By Kirsty Marais from Policy News on 19 April 2016 1

In the headlines today, we’re seeing reports of a study showing some welcome changes in the numbers of people developing dementia over the last two decades. The news is based on the latest in a series of studies published in recent years, suggesting that the numbers of new cases may not be rising as quickly as we would expect as our population ages.

While some of those studies have looked at dementia prevalence (the total number of people with dementia) the research published today focuses on incidence (the frequency of new cases). The headlines today tell us that there has been a 20% drop in the dementia incidence rate for over-65s in the last two decades – in other words, that dementia risk across this population is lower now than it was in the early 1990s – and that that most of this change is a result of a lower incidence rate in men.

A tale of two studies

The data comes from two large-scale studies called the Cognitive Function and Ageing Studies (CFAS). The first of these, CFAS I, began back in 1989 when researchers interviewed thousands of volunteers in different UK regions, all over the age of 65. The researchers carried out assessments to determine how many of the study volunteers had dementia, in order to estimate the total number of people in the UK with dementia – the prevalence of the condition. Two years on, they re-ran these assessments to determine the incidence of dementia, and these results showed that an estimated 183,000 new cases of dementia were occurring in the UK each year.

At the same time, they also made some projections for the future. Taking into account the ageing population, they estimated that by 2015, with the ‘baby boomer’ generation reaching retirement age, the number of new cases of dementia, or incidence, would have increased substantially to 251,000 a year.

In the second study, CFAS II, the team re-ran their research to test their predictions. Starting in 2008, a new group of over-65s was assessed with the same methods, and the researchers used this data to come up with a new set of estimates. In July 2013 the first results from CFAS II were published, focusing on prevalence, and today, we see the newly estimated incidence rates published. The results have been surprising: they show that, despite big increases in the population of people aged over 65 in the UK, the increase in dementia cases has not been as large as originally projected. Instead, the new estimate shows around 209,000 new cases each year – higher than the 1991 figure, but lower than the original projection. 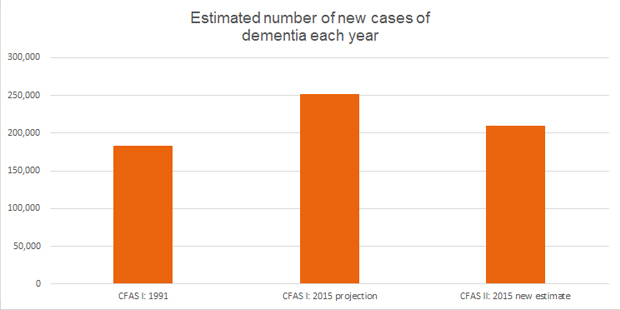 The results also mirror the CFAS II findings on prevalence. When that study was published in 2013, it estimated that instead of the large increase that was originally expected, the total number of people with dementia had stayed roughly the same as it was in the early 1990s. But one surprising new finding from today’s study is that the overall reduction in the incidence rate was almost all due to a reduction in dementia incidence among men – particularly in over-80s.

At the moment, we can’t be sure. This is a robust study, but the results reported today are purely about the numbers, so we can’t pinpoint what’s driving this reduction – although we can speculate. We’ve seen similar trends for reduced or stabilising dementia prevalence reported in other studies in western Europe and parts of the US, and there has already been speculation that the current crop of over-65s have had better access to education and healthcare than the generation before them. Speaking to the media today, the authors of this study pointed out that there have been dramatic improvements in vascular health in recent years, with big decreases in the numbers of people developing heart disease and stroke, both risk factors for dementia. They also pointed to changes in smoking rates: although there has been a decrease in the number of smokers, patterns have been different for men and women, with smoking rates increasing in women later than they did for men, and declining later.

However, the study wasn’t designed to answer this question, so despite these educated guesses we can’t be certain of the reasons behind this phenomenon. It will be important to focus future research efforts on understanding those reasons to help everyone take more informed action in reducing their diseases risk.

Does this mean dementia rates will continue to go down?

We don’t yet know what these results might mean for the next generation of over-65s. This study shows us a snapshot of incidence rates today compared to the picture in 1991 – two points in time -but it doesn’t necessarily show a trend or make forecasts. Encouragingly, it tells us that dementia risk across the population can change, but – as the researchers pointed out today – a number of factors could influence dementia rates in the future.

Dementia risk is complicated and not yet fully understood, but it’s likely to be affected by a mixture of our genetic makeup and our lifestyle. Evidence has linked a lack of exercise, poor diet and poor cardiovascular heath to an increased risk of dementia, and if health trends such as rising levels of obesity aren’t tackled, these could have an adverse impact on dementia rates in future. That’s why Alzheimer’s Research UK is working to increase public awareness of the risk factors for dementia, as well as seeking to invest more in prevention research.

Age remains the biggest risk factor for dementia and our ageing population will continue to have an impact on dementia rates in years to come. While a healthy lifestyle can help reduce the risk of the condition, without sure-fire preventions, research into new treatments is still vitally important. Even with today’s results, there are still huge numbers of people with dementia who need to know that we are fighting for them. But if we can understand the factors driving this drop in incidence rates, we may be able to harness that knowledge to benefit future generations.

One Response to Behind the Headlines: A 20% drop in UK dementia incidence rates