You are here: Home > Behind the headlines: Is a new Alzheimer’s treatment in sight?
By Robin Brisbourne on 23 October 2019 24

You may have seen exciting headlines about a possible new treatment for Alzheimer’s disease. But with so many stories about possible new dementia drugs making the news it can be difficult to know how significant these reports might be. 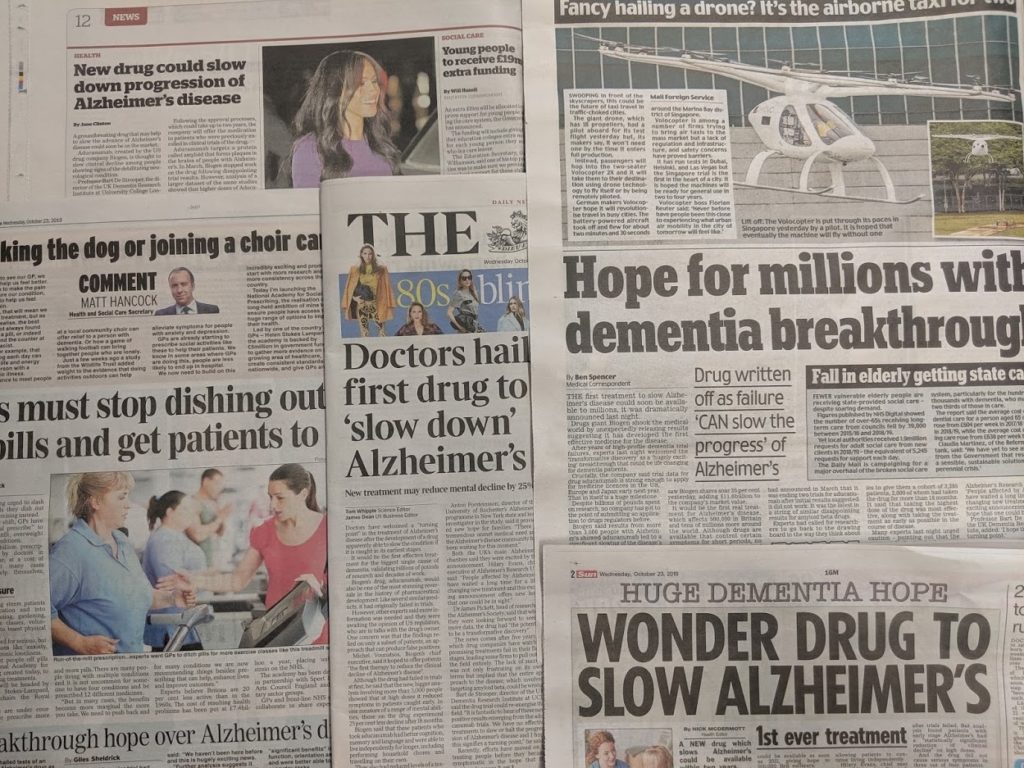 The Pharmaceutical company Biogen plans to file for US marketing approval for aducanumab, an experimental treatment for early Alzheimer’s disease.

This means Biogen believes that their clinical trials show that the drug is safe and able to improve the symptoms of people with Alzheimer’s. If aducanumab gains regulatory approval, it would be the first new Alzheimer’s drug for nearly 20 years and the very first that works by tackling brain changes that cause the disease, rather than helping with symptoms alone.

Importantly, we haven’t yet seen the full data from these trials and the results haven’t been scrutinised by outside experts.

Aducanumab is an antibody designed to target and remove amyloid, a protein that builds up in the brains of people with Alzheimer’s at an early stage in the disease process. People included in the trials of this drug had early memory problems as well as a PET brain scan confirming a build-up of amyloid in the brain. 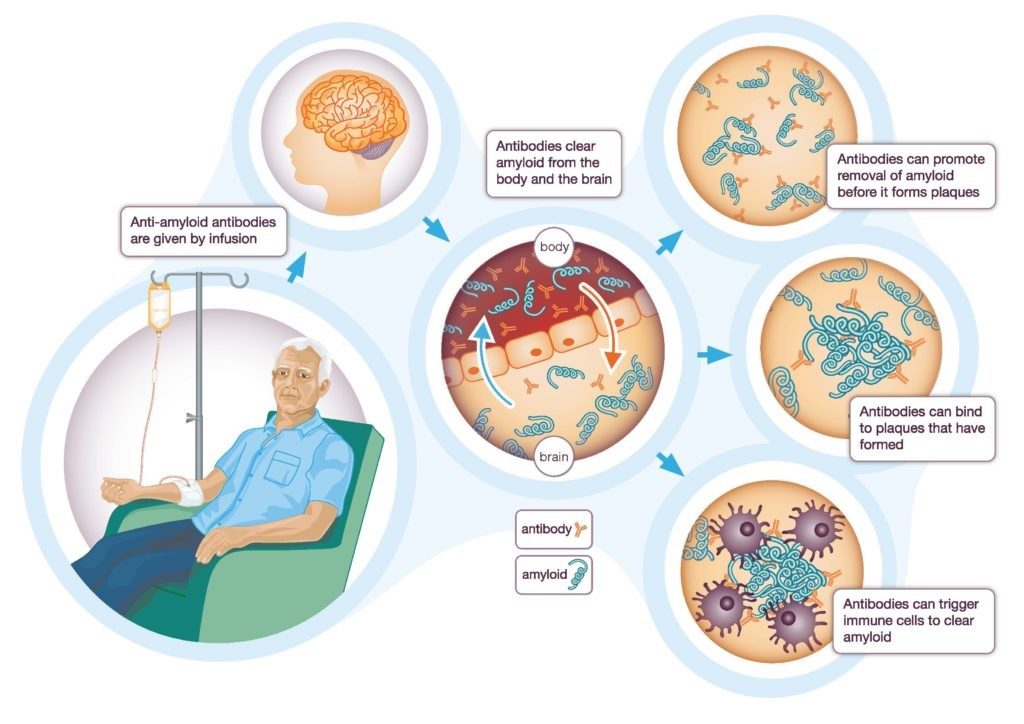 Aducanumab is given to patients by a monthly infusion.

How has it been tested?

Aducanumab has been developed and tested over many years. Two final-stage, phase III clinical trials called, ENGAGE and EMERGE, were designed to evaluate the potential benefits and assess the safety of aducanumab in people with a confirmed diagnosis of mild cognitive impairment (MCI) or mild Alzheimer’s disease.

The trials involved over 3000 people who took part in the study at sites across the US and Europe. Alzheimer’s Research UK helped to support recruitment to this research through our involvement with the Join Dementia Research (JDR) service.

Weren’t trials of this drug unsuccessful?

In March, Biogen and Eisai, another pharmaceutical company who collaborated on the drug, announced that they would stop the two phase-III trials of aducanumab early. An initial analysis suggested that the trials were unlikely to improve people’s memory and thinking sufficiently by the end of the trial.

They have now carried out a new analysis involving additional data that became available more recently. They say this shows that aducanumab not only reduces amyloid in the brain but can also slow the decline of memory and thinking skills and people’s ability to carry out activities of daily life.

The new findings were apparently a result of people having taken aducanumab over a longer period of time than when they ran the earlier analysis. The results they have presented so far suggest that higher doses of the drug are important for a clinical effect.

This is exciting news but with so many people desperate for a new Alzheimer’s treatment we need to hold on and be sure that regulators are satisfied that this drug is safe and effective, and while we hope that they will be, there is no guarantee at this stage.

Biogen now aims to offer aducanumab to eligible patients previously enrolled in the clinical trials. Before anyone else can receive the drug, it will be reviewed by the Food and Drug Administration (FDA), the organisation that regulates drugs in the US. Biogen plans to file an application to the FDA in early 2020 and this process can take up to a year.

They will need to work with the regulator in Europe before it could be available in this country. The National Institute for Health and Care Excellence would then have to weigh the benefits of the drug against its cost before deciding whether it would be provided on the NHS.

This can be a long process, but Alzheimer’s Research UK has been working in preparatory plans for some time with other organisations to ensure that any approved new treatment can get into the hands of patients as quickly as possible. 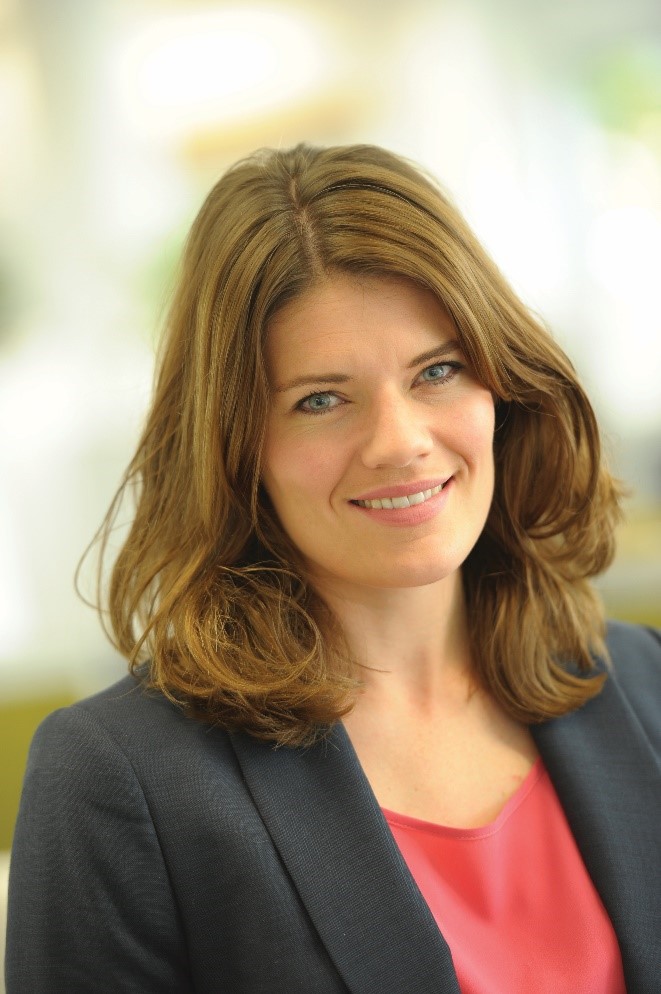 “People affected by Alzheimer’s have waited a long time for a life-changing new treatment and this exciting announcement offers new hope that one could be in sight.

“Taking another look at aducanumab is a positive step for all those who took part in the clinical trials and the worldwide dementia research community. As more data emerges, we hope it will spark global discussions about the next steps for delivering much-needed treatments into people’s hands.

“The FDA will now assess the new data and its strengths and limitations before deciding about whether aducanumab should be made widely available in the US. At Alzheimer’s Research UK, we are already bringing together regulators and drug developers to help speed up the delivery of promising new treatments towards patients. This important work now has renewed urgency.

How can I get involved in research?

Biogen are no longer recruiting people to trials of aducanumab, but if you are interested in taking part in other dementia research studies or have any questions about this new announcement you can get in touch with our Dementia Research Infoline at infoline@alzheimersresearchuk.org or by calling 0300 111 5 111.

Sun, sea, a wedding… and a good cause
More to Uncover

24 Responses to Behind the headlines: Is a new Alzheimer’s treatment in sight?