My name is Steve and I am a Doctor Who fan.

There, I’ve said it.

Ever since I first encountered the eccentric Gallifreyan and his dimensionally transcendental Police Box, I’ve been hooked. Daleks, Cybermen, Sontarans, Silurians – I can’t get enough of them. Which is a pretty strange reaction, considering most of it used to frighten the living daylights out of me.

But it wasn’t always so easy to admit to loving this unusual show, with its unique mix of science, history and occasionally unconvincing monsters.

From geeky know-it-all into the coolest uncle

In the Eighties, my mum was concerned about the level of my obsession – bedroom walls plastered with posters of the TARDIS travellers; scrapbooks bursting with clippings of each Time Lord’s tabloid-worthy tales; toys and model kits; the library of novelised stories.

My mum never really had a chance to enjoy the Doctor’s new adventures in time and space. She was diagnosed with early-onset Alzheimer’s in 2003.

It’s fair to say, back then, the writers’ ambitions often exceeded the series’ budget. And that’s putting it kindly. The wobbly sets, cheap costumes and panto performances were all targets for comedians’ jokes – and, ultimately, the TV axemen.

In 1989, the “classic” series of Doctor Who ended and, perhaps to my mum’s relief, I turned my attention to new hobbies like music, and sport, and girls. (If there was one thing that impressed girls in 1989, it was a detailed knowledge of Doctor Who.)

It took a triumphant reinvention in 2005 to turn Doctor Who into something even approaching cool. Now it is one of the most popular programmes on telly, and a fixture of the Beeb’s Christmas Day schedule. As an added bonus, I somehow similarly transformed from a geeky know-it-all into the coolest uncle in the family. I knew all that useless Whovian trivia would come in useful one day! 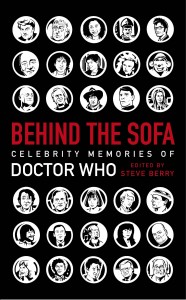 Behind the Sofa is in shops now!

But if there’s one thing that unites all Doctor Who fans, it’s that moment when we experienced the thrill of the programme for the first time. Some of us were frightened out of our wits. Some of us were excited or inspired. None of us was the same again.

These powerful memories are what make up Behind the Sofa, a collection of over 150 celebrities’ favourite – and scariest – moments of Doctor Who. I’ve spent the last five years interviewing famous folk – many household names, and others who have more direct Doctor Who links – to ask them one simple question: what is your strongest memory of Doctor Who? The resulting book is, I hope, by turns touching, heart-warming, funny and educational.

If I might be permitted to name-drop for a second, the collection includes contributions from:

Order your copy of Behind the Sofa today and you’ll be helping to fund vital dementia research!

My mum and my motivation

Unfortunately, my mum never really had a chance to enjoy the Doctor’s new adventures in time and space. She was diagnosed with early-onset Alzheimer’s in 2003, at the comparatively young age of 58, and died just six years later. All the author royalties from this book will be donated in her memory to Alzheimer’s Research UK, dedicated to finding a cure for this terrible illness.

To be honest, I think she’d have remained as perplexed by the programme’s enduring popularity as I have been delighted. On 23 November, Doctor Who will celebrate its 50th anniversary and then, just a few weeks later, introduce Peter Capaldi as the twelfth (or maybe thirteenth?) incarnation of the famous Time Lord.

The series’ unique ability to replace each lead actor with someone who looks completely different, without the audience having to suspend disbelief, is often credited as the secret to its longevity. In the Whoniverse, this process is called regeneration – and it is a word I hear more and more in discussions of potential treatments for Alzheimer’s. If scientists can find a way for the brain to regenerate its own cells, we may be on the way towards a cure.

If not, then maybe one of the other 140 scientific research projects funded by Alzheimer’s Research UK might hold the key. Who knows? I can’t tell the future. If only I had some sort of time-travelling spaceship…

When I conceived the book, I wanted it to fulfil two purposes; firstly, to raise a TARDIS-load of cash for scientific research into the dementia that affected my mum; and secondly, to show just how vibrantly Doctor Who can live on in the memories of those who experience it.

Five years on, I reckon that, if I could get all the famous names who have contributed to the book into one room for a day, it would be the biggest and best Doctor Who convention ever. I always had a sneaking suspicion that pretty much everyone in the world loved this show as much as me. Well, now I have concrete proof.

Steve Berry is an author and freelance writer for TV, magazines, newspapers and the internet. He gave up what little career he had to act as a carer for his mum, Janet, after her diagnosis with Alzheimer’s disease until her death in 2009. He has appeared on countless radio and TV shows talking about dementia and his specialist retro subjects – TV, toys, sweets and snacks – including Channel Five's Greatest Moments series, UK Gold's Porridge and Doctor Who weekends, BBC Four's The Hard Sell and C4's Top Ten TV and 100 Greatest Toys. Follow him on Twitter at @unloveablesteve.
View all posts by Steve Berry →