You are here: Home > Would you donate your brain to help research?
By Dr Laura Phipps from Science News on 8 January 2014 5

Many people will happily sit for an hour (me included) and give blood to help others who may be in a time of crisis. Almost 20 million people in the UK are on the NHS Organ Donor Register, to make sure their organs can be put to good use by others when their need for them runs out.

But what about donating your brain to help defeat dementia?

Some might think that’s a step too far. In fact, philosophers argued for centuries about whether the brain is the ‘seat of the soul’. Is that too big a gift to give away? Not according to many of those who have pledged to donate their brains to research through our Brains for Dementia Research programme. 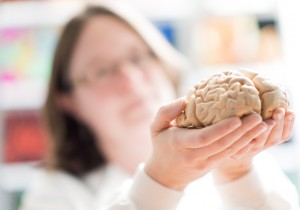 Don’t get me wrong, I am not saying that it’s not a huge decision – it is. And one that needs to be made with the understanding and support of the whole family. But I was humbled and a little surprised by the matter-of-fact attitude to brain donation that I found when speaking to many donors. “Why not?” was a common retort when I asked their motivation for signing up for the project. “I’m not going to have much use for it when I’m gone.”

Around 2,400 people have signed up to Brains for Dementia Research since it started in 2007 – an amazing show of generosity. In fact, recruitment centres for the programme in the South are already reaching capacity.

The truth is that human brain tissue for medical research into dementia is in scarce supply. We can’t grow human brains in the lab or take a biopsy from someone’s brain to study under the microscope, so it’s the real gold standard for understanding what happens in the diseases that cause dementia. In fact, it’s not just brains of people with dementia that are important – brain tissue from older people without dementia is equally important for comparison.

When I talked to the staff at the brain banks, I was amazed to find out that a single brain can provide enough tissue for up to 20 research studies. This means that one donation can help to answer a whole range of different questions about dementia. 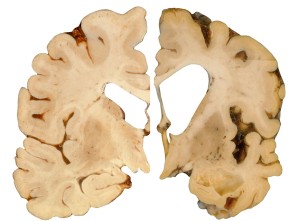 (Caption) Shrinkage in the brain can be seen with the naked eye in those with Alzheimer’s (right) compared to those without (left) . Image courtesy of Prof Seth Love, University of Bristol.

Brains for Dementia Research is funded jointly by Alzheimer’s Research UK and Alzheimer’s Society, in conjunction with the Medical Research Council, to address this lack of available brain tissue. It gives people of any age with dementia, and those over 65 without dementia, the opportunity to donate their brain after death. The scheme provides high quality brain tissue to dementia researchers to help them make progress in research faster.

The unique thing about Brains for Dementia Research is that it doesn’t just sign people up for brain donation after death. Donors are also visited every year or so for a check-up and assessment of their memory and thinking skills. This means that when the time comes for the brain to arrive at the brain bank, researchers also have a clear image of how well it had been working throughout life.

This year, Alzheimer’s Research UK was pleased to commit another £1.75m as part of an overall £3.5m funding boost for the Brains for Dementia Research project. This funding will see the project continue for another five years.

The truth is that human brain tissue for medical research into dementia is in scarce supply.

Brains for Dementia Research has been signing up donors from all across England and Wales. While recruitment centres in the South are reaching capacity, those in Wales, the North West and North East are still keen to sign up new donors. They are also interested in increasing their network of older donors – those over 85. It is never too late to sign up as a brain donor.

So have a think. It might not be a decision you are ready for now. It might never be a consideration for you and that is fine. But if you feel you could contribute to dementia research through brain donation and live in one of these three areas, I would encourage you to find out more.

You can read our brain donation FAQs, or contact the Brains for Dementia Research team on 0207 848 8377 or bdr.office@kcl.ac.uk

Tell us your thoughts on brain donation by leaving a comment.

Tagged with: Our research projects, Dementia research, Our work, Brain donation
Back to school
Will this be the year that turns the corner for dementia?

5 Responses to Would you donate your brain to help research?