My auntie passed away last year after living with Alzheimer’s disease for 11 years, this was obviously a really sad time for all of my brothers and sisters (there are nine of them!) but actually, what affected me even more than this, was the profound loss felt by my twin brother Keith who was her primary carer for the duration of this time.

Whilst carers put their all into looking after family members living with dementia, and it is a role which is underpinned by love, I don’t think we necessarily appreciate the stress and the strain that carers go through and more specifically the loss they fell when this role inevitably comes to an end.

This is why I decided to raise both awareness and funding for Alzheimer Research UK, in memory of my auntie and in enormous gratitude to my twin brother.

I have to say, I approached the London to Brighton cycle ride thinking it would be a doddle, I cycle anyway, albeit over short distances and on a mountain bike, and so extending the distance by five-fold at least felt doable if I trained a little. So I started training with a friend and ex-colleague, Sarah Howell, who was raising money for Go4it. First lesson learned, don’t try to keep up with your fellow cyclist when she is on a road bike and you are on a mountain bike. I was fine with the training up to a 34-mile distance but after that, it became more and more painful to keep up the pace – solution? buy a road bike! Training went pretty well after that.

Fundraising was another challenge, not a physical one of course but a challenge nonetheless. Once family and friends and work colleagues (who were very generous) have been exhausted where does one go next? I was happy with the amount I raised from doing the ride but I’ve definitely got some ideas to build on for future fundraising efforts!

The cycle ride itself was just brilliant for lots of reasons

i) it didn’t hurt at all, two pairs of cycling shorts really helped!

iii) the personal stories that were told along the way were truly humbling and motivating.

More than 4,500 cyclists took part; the roads were not closed at the beginning of the ride which was a little scary as traffic in London at the best of times is not great and adding thousands of cyclists to it can hardly help.

After a bit of ducking and diving we managed to clear London and headed out for the countryside and the start of the hills. The foothills were not too bad but already the biker traffic was starting to spread out with the really fit guys sprinting ahead, the poorly prepared cyclists lagging behind and me and Sarah somewhere in the middle. All I can say is that I am so pleased I decided to progress from a mountain bike to a road bike otherwise I would have struggled significantly.

Our first stop was 14 miles pre-Ditchling Beacon and was the lunch stop which consisted of a huge and very welcome spread of food, lots of chance to mingle and speak to others cycling with Alzheimer’s Research UK shirts on and a great opportunity to have the guy with the mic give a big shout out to Alzheimer’s Research UK.

And then on to the toughest but best part of the whole ride, climbing Ditchling Beacon. Toughest because it just goes on and on, every time the road levels out and you think you’ve made it, around the corner is another ascent. I would like to tell you that I cycled all the way to the top but I most certainly didn’t, few people did. But that’s why it was also the best part of the ride, most people were walking and pushing their bikes but this gave everyone the opportunity to talk, to share stories, to support each other and to laugh at each other. Such a hugely positive experience! And this is what the top looked like: 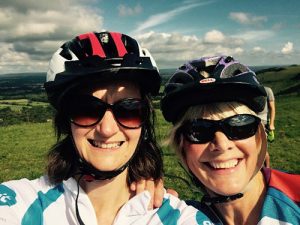 From there it was literally all downhill, the first part a gentle downward slope, the second part a scary and almost vertical descent – clearly, I am exaggerating but this is how it looked and felt. My brake pads likely suffered a lot from that descent and certainly my forearms did as I hung on to my break levers almost all the way down. I very much prefer uphill to downhill!

o are currently living with dementia.

If you’ve been inspired by Carol’s story and would like to take on your own cycling challenge, we have just the thing for you – Cycling Down Dementia. A challenge for everyone, whether you cycle every day or need to dust your bike off, you can choose to take on the Epic (1,000-mile challenge) or Pioneer (300-mile) challenge and raise £150 for dementia research. However, you need to be quick as the challenge ends on January 31!

Carol is the Director of Research at Alzheimer’s Research UK where she currently drives the research agenda. Carol has moved to ARUK from the Dementia Discovery Fund, where she was a Venture Partner with a key focus on identifying and developing novel disease-modifying mechanisms for the treatment of all types of dementia, sourcing opportunities from academic research groups and small companies.
View all posts by Dr Carol Routledge →

Politics, party lines and prioritizing dementia: highlights from 2017
A pair of pink slippers for Christmas

One Response to Carol Routledge talks about her cycling fundraising experience