You are here: Home > Championing ‘Join dementia research’
By Zara Qadir on 24 February 2015 0

Susie Hewer from East Sussex was a full-time carer for her mother, Peggy, who lived with vascular dementia for many years. Since her mother’s death in 2005, Susie has been an Alzheimer’s Research UK Champion, speaking out about dementia and the need for research. Known as the ‘Extreme knitting Redhead’ she has run 41 marathons to date and raised over £35,000 for vital research projects. She draws attention to her cause by various fundraising activities; in 2014 she crocheted whilst running to beat her own Guinness World Record for the longest crochet chain whilst running a marathon at the London marathon. I’ve spoken to Susie about her work championing ‘Join dementia research’. 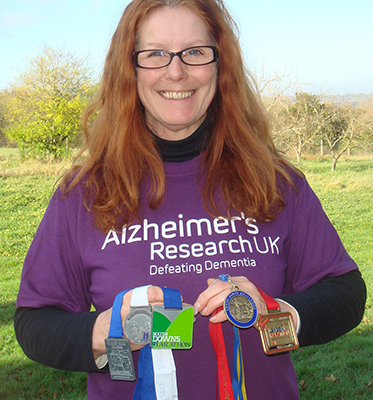 Susie with her five 2012 marathon medals

She says “I like the word ‘Join’, because it’s inclusive and it encourages you to actually make a difference. When you’re dealing with dementia you can feel very isolated, which I know only too well from being a carer, and the idea of joining something makes you feel less alone, and it also gives you hope that you’re actually making a difference.”

Susie points out that people with dementia might think joining was all too much bother, so suggests “if somebody with dementia feels it’s all a little bit too much, ask their carer to get involved too, because it then takes the pressure away from them.”

She also highlights the role of GPs and notes “I think it should start at the doctor’s surgery when there’s a referral to a specialist. That’s where we need to catch people, so it demystifies everything about it”.

Susie is in the PROTECT study, that is currently recruiting on ‘Join dementia research’ service.
This study aims to improve understanding of the way our brains age, and why some people develop dementia, in order to develop better ways of treating and preventing it.

You can follow Susie on her Extreme Knitting Redhead blog.

Zara Qadir is Communications Manager at the NIHR Clinical Research Network. She works with the 'Join dementia research' (www.joindementiaresearch.nihr.ac.uk) team to ensure that the public are aware of the opportunities to get involved in dementia research. After a degree in Biological Sciences and a Masters in Science Communication, Zara has worked across a number of fields as a science and medical writer, and has a keen interest in talking and writing about scientific research.
View all posts by Zara Qadir →