You are here: Home > Get volunteering: get cheering!
By Harriet Parker from Fundraising on 19 February 2014 0

Waking up early on a bright Sunday morning I was eager to attend my first big race. Not being a runner myself, the prospect of being part of a cheering squad from the safety of the side-lines is much more exciting (and a lot less exhausting).

Well equipped with Alzheimer’s Research UK branded goodies, donning my purple t shirt and carrying my huge camera in true tourist style I boarded a train to the capital. 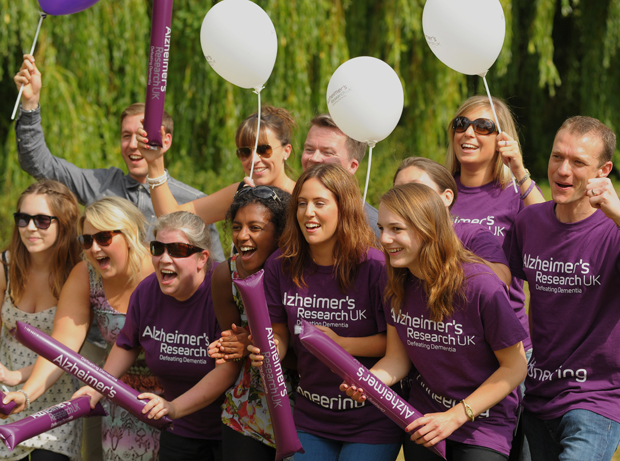 Arriving at the 2K point of the race the atmosphere was truly electric, the pavements full of people all preparing to cheer on their loved ones who would be completing the British 10K London Run in the glorious sunshine and extreme heat.

I got such a buzz knowing we had given them a much needed boost of encouragement to complete the challenge ahead.

Once the race began a sea of people in a variety of charity vests ran past, clearly grateful for the support from the onlookers. I was surprised to spot Scooby-Doo, Superman and a home-made set of lungs all doing their bit for their chosen charities.

My colleagues and I had a job to spot our runners but when we did I got such a buzz knowing we had given them a much needed boost of encouragement to complete the challenge ahead.

After cheering on the masses with admiration I headed towards the finish line and was lucky enough to bump into a few of our runners. The overwhelming response from them was relief, pride and thanks for the support.

Despite looking a bit worse for wear they were happy to pose showing off their newly acquired medals.

Think you’ve got what it takes to stand on the side-lines and wave an Alzheimer’s Research UK cheering stick? This year we’ll be showing our appreciation again at the same event as well as the Virgin London Marathon and BUPA 10K; come along and join our purple army!