You are here: Home > Climbing Kilimanjaro for my mum
By Ben Barribal on 17 September 2013 0

Five years ago, my mother went missing. My father and I searched for her to no avail until the following day. After a very long night of worry, the police found her 50 miles away wandering around someone’s garden. She was confused and had clearly spent the night under a hedge. It transpires that she had experienced a ’vascular episode’, which eventually resulted in a diagnosis of combined Alzheimer’s disease and vascular dementia.

Mother was a highly intelligent and accomplished woman. Having taught English in her earlier career, she began breeding horses after marrying my father. She knew every contributing blood line of the herd going back many generations. Although she was always a little eccentric, it was only when she was finally diagnosed with dementia that we began to realise she had been displaying early-onset symptoms for several years. We knew very little about Alzheimer’s, but after learning more, we were both appalled to learn of the lack of funding that goes into dementia research. I wanted to do something about it, even though I’d never done any sort of sponsored event before. To raise funds for Alzheimer’s Research UK, I decided to climb Mount Kilimanjaro.

Kilimanjaro is the largest volcano ever to break the earth’s crust – that’s 5,895m to be precise, or three and a half miles high. As it’s classed as a high altitude summit, complex physiological changes take place in the body once above 2,500m because the air becomes thinner and there is less oxygen. When we breathe, our intake of oxygen is less and so our body has to work much harder to get oxygen to its essential organs. To put this into context, at the summit of Kilimanjaro there is half the amount of oxygen than there is at sea level. 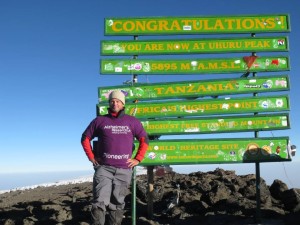 The expedition covered a total of six days and five nights on the mountain itself. Every day was tough; different in its own way, and hard work, brutal and relentless. It just seemed to go on and on but fortunately I didn’t succumb to altitude sickness (unlike several in the party who were unable to continue).

Physically, it was just good old fashioned hard work, but mentally it was the greatest challenge I’ve ever faced. Ignoring the overwhelming desire to stop and sit down was a constant battle, one several people lost. But the guides were brilliant at keeping the pace just right and those who made it to the top were rewarded with the most amazing views from the highest point on the African continent.

I funded the expedition myself so all donations went directly to Alzheimer’s Research UK and to date I‘ve raised over £6,000.

I’ve received a terrific amount of support and I think the secret to good fundraising isn’t asking a few people for lots of money – it’s asking a lot of people for a little. I found success in what I call ‘pyramid fundraising’ – instead of asking my father to sponsor me, I got him to ask all his friends to sponsor me, and to ask them to ask their friends, and so on. It’s amazing how quickly the £5 and £10 donations can mount up.

My mum has been changed forever by Alzheimer’s. She can’t communicate, she can’t feed herself, she doesn’t even recognise me anymore. It’s too late for my mum, but I wanted to stop it affecting other people’s mums. I’m delighted to have been able to help Alzheimer’s Research UK and am very grateful to all who sponsored me; friend, family and stranger alike.

If you would like to make a donation, please go to www.justgiving.com/benbarribal

Fundraiser Ben Barribal lives in Hampshire and is married to Toni, and together they have three daughters; Pippa and identical twins Verity and Matilda. Ben was born and bred in the farming industry, the family working in both the arable and dairy businesses. Ben moved into the corporate world in his late 20s and has been working in recruitment ever since. In 2011 he established Barribal Associates, a niche recruitment business focussed on the senior finance market place.
View all posts by Ben Barribal →

Braving the Bridge for a breakthrough
Can I really cycle 450km across Vietnam?