You are here: Home > Conquering the Everest Marathon for my dad
By Mike Curtis on 17 July 2017 3

I signed up to the Everest Marathon because it’s got the wow factor. My dad was always an armchair adventurer, he loved the idea of travelling. Even though his dementia is very far advanced now, if I mention Everest he’ll say ‘the highest mountain in the world’. It is nice to know I have fulfilled his dreams.

Just getting to the start of the Everest Marathon was a huge challenge. Three of our group of 14 did not make the start with two requiring quite urgent medical evacuation. Thankfully all are well since returning to low altitude. Sadly one participant from another group died en route. It’s common for people to hide their symptoms in the hope it clears up, so strong are individual’s desires to continue towards their goal.

My partner Christine and I passed our final medical checks before moving to Everest Base Camp. My blood oxygen saturation level was a ‘good’ 88, which I was reliably informed would have resulted in an emergency admission to ICU in a UK hospital. This is the state of your body in the atmosphere of Everest Base Camp where only 50 percent oxygen is available compared to sea level. Everything leaves you out of breath. 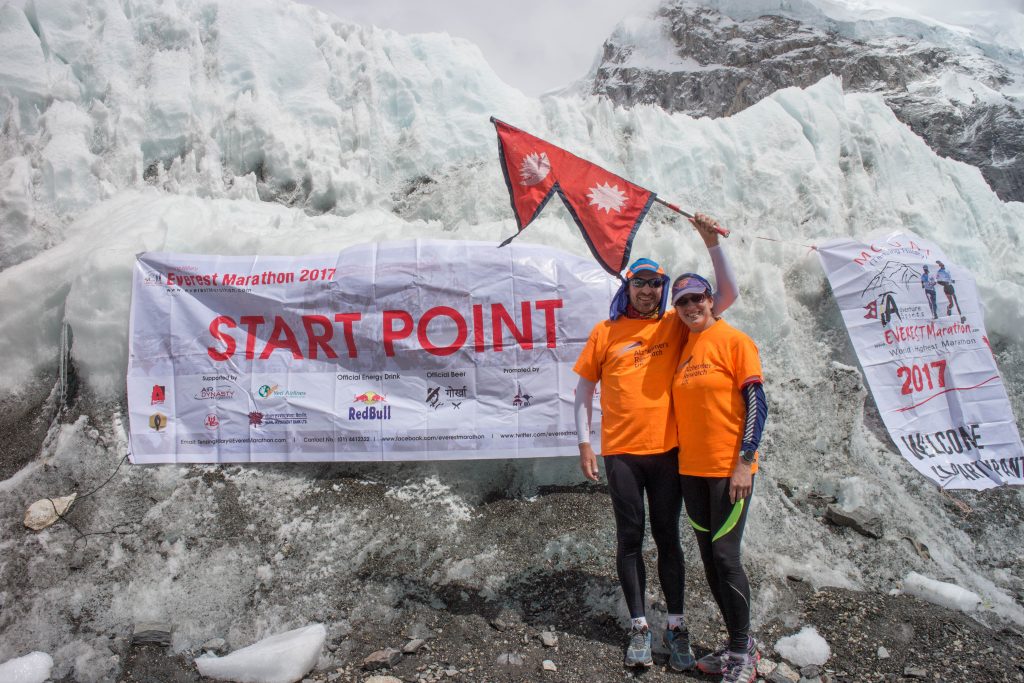 The race started with a large group of Nepalese runners sprinting off across the ice and boulders. The rest of us went in an orderly fashion along a narrow, icy track. The first 10kms were slow and little more than a walk as we passed the side of two glaciers.

I then attempted to run along some of the gentle downhill sections we’d walked on the way up. It just wasn’t possible. I was still in excess of 16,700ft, so fast walking had to suffice. As I reached slightly lower altitude I was able to run, albeit slowly downhill for the most continuous period of the event. That sharply came to a stop when I began the Bebre loop, an intense three-mile loop up a valley. Despite having run this earlier in the trek it felt so much harder now as we were approaching half way. I’d been on the move for over four hours!

Then I was faced with downhill paths interspersed with short uphills. I should have been able to run continuously, but I found my pulse quickly rose too high so I had to run/walk.  As with other parts of the route I had to yield the path to yaks and mules – a unique feature of the race.

At 20 miles in I reached the dreaded ascent to the Tengboche Monastery. It’s less than 500ft high but desperately hard-going. The reward for reaching the monastery is to begin a massive, steep descent of over 2,000ft down to the Dudh Kosi river, the lowest point on the route. My tired legs got a real battering on this endless section. I then faced the crux of the event, the climb back out of the valley to regain the height I just lost. It’s brutally steep and unrelenting for a few miles. Eventually its gradient reduced and I reached a familiar small settlement that marks a relatively flat 2.2 miles to the finish. 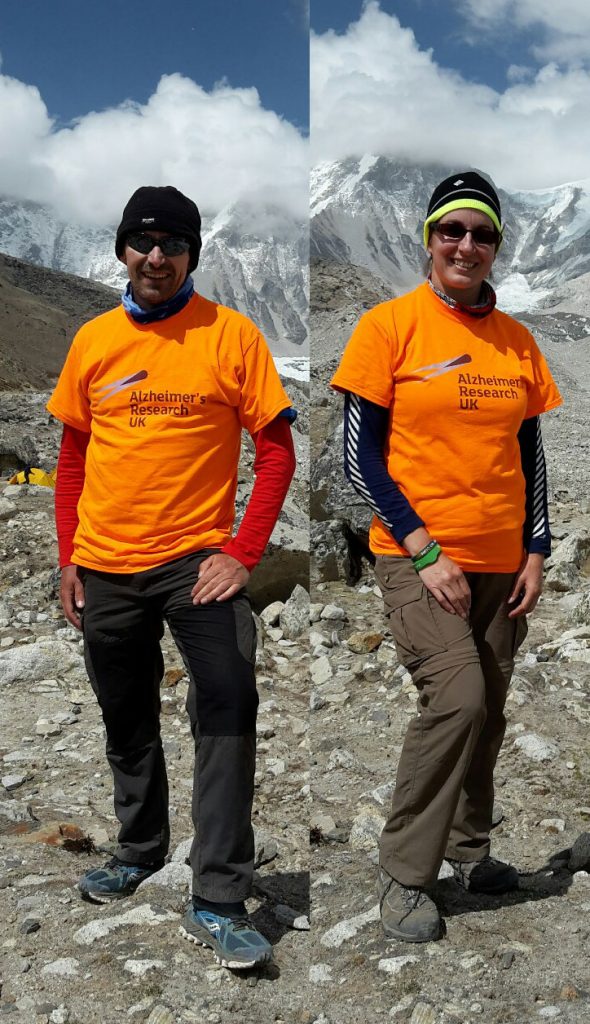 I managed to jog the final quarter mile to Namache Bazar where a red ribbon marks the finish line. It’s a nice touch, every competitor gets to break the finish tape. It was a relief to finish, taking 9 hours 45 minutes, the longest marathon I’d competed in by 4 hours. I waited for Christine, who finished shortly after.

What I learned: Stay hydrated. It’s not your average marathon, and I hadn’t thought about the challenge of keeping myself fuelled and hydrated so I struggled in the last 10km.

During the race I thought of my dad, sitting in his care home back in the UK. His Alzheimer’s is very aggressive and it has robbed him of most awareness of life. It’s sad to know he’ll have little to no understanding of what I’m doing. But this run has been for him – and I’m so pleased to have raised much-needed funds for Alzheimer’s Research UK. If you’d like to donate, you can do so here. 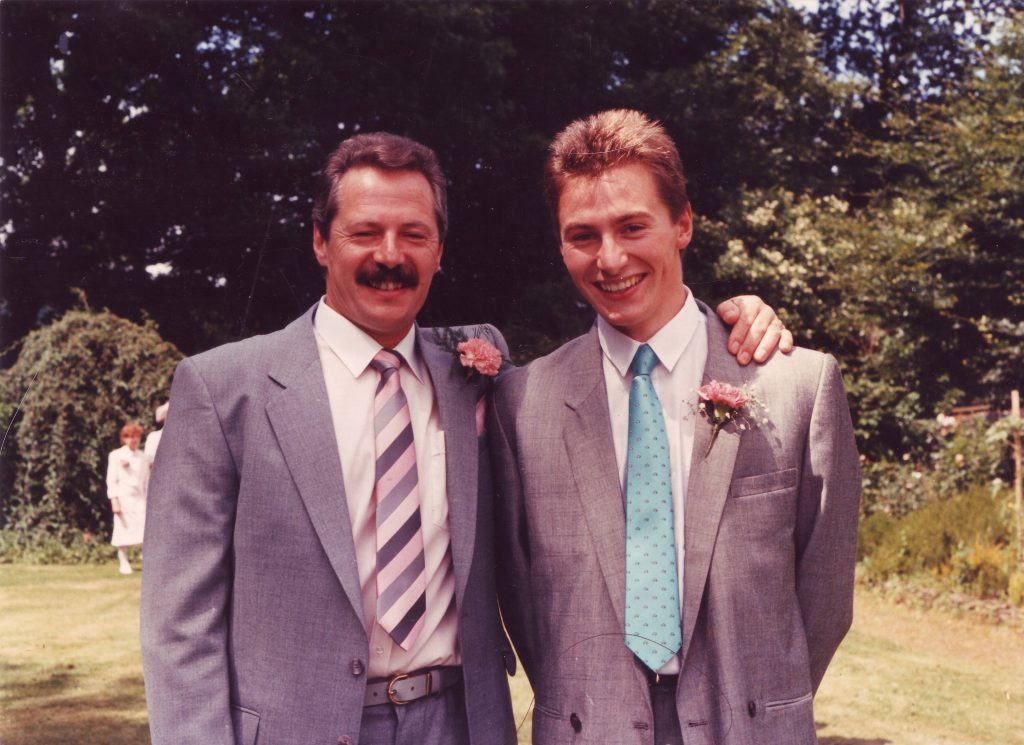 To take on your own challenge for Alzheimer’s Research UK, get inspired at www.alzheimersresearchuk.org/fundraise

Mike Curtis is a geologist from Northamptonshire. He took on the Everest Marathon in May 2017 with his partner Christine, in honour of his father Lance, who is living with Alzheimer’s disease.
View all posts by Mike Curtis →

What do we know about head injury and dementia?
The hunt for Alzheimer’s treatments – amyloid and beyond

3 Responses to Conquering the Everest Marathon for my dad