You are here: Home > Could the answers to dementia be hiding in your fruit bowl?
By Jo Sharpe on 1 October 2019 2

Imagine it’s a hot summer’s day and you are relaxing in the garden. Maybe you’re sipping on a glass of cool lemonade, savouring uncharacteristically good British weather. Everything is perfect, until you raise the glass to your lips and notice a fuzzy black speck writhing around in your drink. A pesky fruit fly. Gross. You put down the glass and focus on your fruit salad. With horror, you realise that another little blighter has been munching on your apple. How can anybody see the good in these irritating insects? 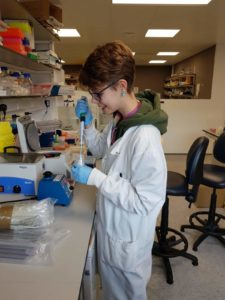 Unbeknown to most, the common fruit fly is an invaluable research tool; many scientific discoveries would have been impossible without it! I use flies in my own research into the genetics of frontotemporal dementia (FTD) and motor neurone disease (MND). Both are fatal and incurable diseases of the nervous system.

FTD and MND are heart-breaking to witness – a previously loving father whose personality completely changes, or a keen athlete slowly losing all ability to walk and in constant pain. It is vital that we prioritise research to understand what is happening inside cells so we can find ways to halt and reverse these devastating diseases.

I am studying a mutation (an error in DNA) found in FTD and MND. The mutation causes large, sticky proteins to slowly build up within nerve cells, effectively clogging them up. Eventually these cells become unable to tolerate this and die. A gradual loss of nerve cells results in progressively worsening symptoms, and an ever-increasing impact on someone’s life.

Despite some progress the question still remains: how do these toxic proteins cause cells to die? This is what I aim to find out.

More similar to us than you think

So how do fruit flies help me understand how these toxic proteins kill cells? It may seem far-fetched as you recall absent-mindedly swatting away a fly from your fruit salad, but without this humble insect the world of medicine would look very different.

Originating in equatorial Africa, the jet-setting fruit fly was first discovered in a jar of prunes in America in the 1800s. Its rise to worldwide acclaim as a way to study genetics began in 1906 when Thomas Hunt Morgan began breeding flies in huge numbers. One day he noticed a fly with an abnormal white eye. He realised that this was caused by a spontaneous mutation and could be passed on to offspring – a transformative discovery in the world of genetics.

In 1933, Morgan won a Nobel Prize for discovering that genes are inherited via chromosomes, like beads on a string. Since then, five Nobel Prizes and over 100,000 scientific papers have resulted from groundbreaking biological work using fruit flies. Now you’re starting to see the fruit fly a little differently, I hope.

Why the fly? We know that 75% of disease-causing genes in humans are also found in the fruit fly. We even share certain behaviours – for example flies are known to turn to alcohol after being rejected by previously mated females!

Practically, research involving fruit flies is a relatively straight forward and cost-effective way to carry out genetic studies – we can keep hundreds of thousands of them in the lab and they become grandparents in just 20 days. Fly DNA can be manipulated relatively easily and tracked through generations using “marker mutations” such as curly wings or hairy shoulders.

My flies are genetically modified to produce these toxic proteins in their nerve cells, mimicking what happens in FTD and MND. Initially I wanted to know if the flies had similar problems with movement as people with MND. I started by creating a “climbing rig” by fixing some glass tubes to a polystyrene box. I measured how quickly normal and genetically modified flies of different ages climbed to the top of the tubes after being knocked to the bottom. Then the exciting results started to come in.

The older mutant flies climbed more slowly, just as older people with MND have problems walking. Armed with the knowledge that I have a good way to study disease, I can now investigate what is going on in the nervous system.

From measuring protein levels to studying their tiny brains, there are plenty of ways I can begin to unravel what is happening inside neurons in FTD and MND. There can be no doubt that fruit flies are instrumental in our quest to answer these urgent questions. Let’s all spare a thought for this species next time we reach for the fly swat!

Jo Sharpe is a PhD student at the University of Manchester and part of the Alzheimer’s Research UK Network. She studied biology at the University of York where she first began using fruit flies to study human neurodegenerative disease. Inspired by her colleagues in the lab and neuroscience lecturers, she decided to start a PhD with Prof Stuart Pickering-Brown in Manchester. Her research focuses on the genetics of frontotemporal dementia (FTD) and motor neuron disease (MND). She aims to understand more about these diseases by using genetically modified fruit flies. In the future, she hopes these fruit flies could be used to test drugs to treat dementia.
View all posts by Jo Sharpe →

A record year, thanks to you
Everything you need to know about the causes of Alzheimer’s disease

2 Responses to Could the answers to dementia be hiding in your fruit bowl?