You are here: Home > Cracking the tau challenge
By Kirsty Marais from Science News on 30 January 2014 0

Last autumn we laid out a challenge for scientists from all disciplines, asking them to solve a crucial problem in dementia research: how can we develop new ways to test potential treatments aimed at a hallmark dementia protein, tau? They rose to the challenge, and work is now starting on four projects using stem cells to advance research into new treatments.

Stem cells have unique potential: given the right direction, they can become any other type of cell in the body, including different types of cell found in the brain.

Four labs have each been awarded up to £100,000 in phase 1 of the CRACK IT Challenges programme – a competition run by the National Centre for the Replacement, Refinement and Reduction of Animals in Research (NC3Rs). This annual competition invites scientists to crack some important questions in research, using methods that help reduce or replace the use of animals in the lab, or improve animal welfare.

We’ve joined forces with the NC3Rs to back one of these challenges, UnTangle, which aims to develop innovative new techniques to help in the early stages of drug development. Co-sponsored by Alzheimer’s Research UK, Janssen and Lilly, the competition runs in two phases. At the end of phase 1, the most successful team will be awarded further funding of up to £1m to fully develop their work over a period of up to three years. 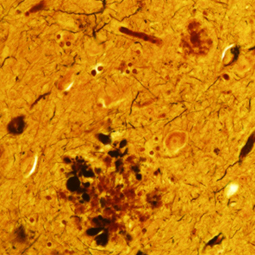 These four teams are working to mimic the effects of a protein called tau in Alzheimer’s disease. In a healthy brain, tau plays an important role in helping to keep cells stable, acting as a form of scaffolding. But in several neurodegenerative diseases, including Alzheimer’s and frontotemporal dementia, something goes wrong with tau. The protein accumulates into tangles inside nerve cells, causing damage.

Researchers across the globe are working to understand how to stop this damage with treatments that target tau. However, before a potential treatment can be tested in people, scientists have to understand its effects – both intended and unintended. To test a treatment in the lab, you need to be able to recreate, or ‘model’, the damage you’re trying to stop.

That’s where CRACK IT comes in: our finalists will use human stem cells to try to recreate the damage caused by tau in the laboratory. Stem cells have unique potential: given the right direction, they can become any other type of cell in the body, including different types of cell found in the brain. 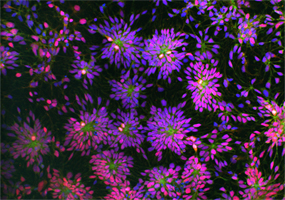 The challenge is to use stem cells to create a network of living brain cells that sustain the same damage seen in diseases like Alzheimer’s. It’s a tricky task, but if it can be achieved, a stem cell model could be used to test the effects of compounds designed to target tau and prevent the damage as it accumulates.

All new treatments will eventually need to be tested in animals before moving to clinical trials – it’s required by law, as it’s important to understand a potential drug’s effects in living systems before human testing begins. But by using stem cell models first, the aim is to rule out compounds that don’t hit their target or may cause unwanted side effects, streamlining the research process. Crucially, this work could help identify compounds with the most promise – bringing us closer to treatments that are so desperately needed by so many.

Tagged with: Our research projects, Our work
Painting the town purple
Finding Dad