You are here: Home > Dressing the tree with memories
By Susie Hewer on 23 December 2013 2

Christmas; so many happy memories, but for me it’s also tinged with sadness. You see my father died and was buried on Christmas Eve and then many years later it was the date that my mum, then in the final stages of vascular dementia, went into a nursing home for the last few months of her life. I grieved as much on that day as when she actually died.

In true Blue Peter style we’d spend hours wrapping coat-hangers in tinsel and attaching baubles to them to hang from the ceiling.

We only had a small family and so my parents always tried to make Christmas extra special and I have fond memories of my childhood. My mum was a talented needlewoman and in November each year, we would start to gather things to make Christmas decorations. We’d forage for twigs and pinecones to make a wreath, stick cloves in oranges and dry them to make spicy scented pomanders to scent the house, knit, stitch and crochet ornaments for the tree. In true Blue Peter style we’d spend hours wrapping coat-hangers in tinsel and attaching baubles to them to hang from the ceiling.

Many of those ornaments are still with us and are brought out annually. That’s what sparked off an idea I had for Christmas last year. I live in a small rural community and everyone has been so supportive of my fundraising activities that I wanted to give something back to them. I’d already used crochet, which forms a series of interlocking chains, as a way of explaining how dementia breaks the links between brain cells. So I decided that I would crochet snowflakes for everyone as a thank you gift to put in their Christmas card. 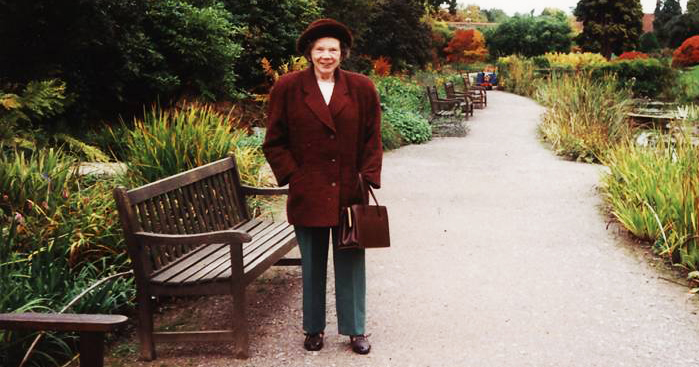 As I crocheted away I remembered that I had some cotton yarn in purple and white, the colours of Alzheimer’s Research UK, and an idea percolated away in the back of my mind. There was to be a Christmas tree festival in our village church and so, two weeks before the date of the festival, I decided that I would decorate my own tree.

It felt as if Mum was helping me with the decorations.

My mind and hands went into overdrive to bring my plan together in time. I started knitting and crocheting snowflakes and gathered together anything that would add to my theme. In amongst my treasured decorations I found a giant snowflake that Mum and I made from metal coat-hangers when I was a child. All it needed was some new tinsel to make it good as new and it was perfect for the top of the tree. Better still, it felt as if Mum was helping me with the decorations.

Decorating the tree was a very emotional time as people kept coming over to see what  I was doing and then they’d give me a hug and tell me that Mum would be proud of me. It took hours to get mine looking just right as I wanted it to be perfect. There were about 25 trees in total, decorated by local groups and schools and visitors to the festival were asked to vote for their favourite.

Here’s what I wrote about it:

I have dressed the tree to show how dementia takes over the brain, gradually breaking the connections until the brain is no longer able to function. Using two of my favourite hobbies, crochet and knitting, I chose a snowflake motif to represent the brain. The chains formed in crochet link each part together, allowing thoughts to flow freely between each connected section.

In the white section at the top of the tree, everything is normal. In the next section the purple patches in the snowflakes represent how some areas have started to deteriorate and have stopped thoughts flowing freely. The purple section represents the final stages of dementia when the functionality of the brain has been overwhelmed and nothing makes sense.

Thank you to everyone in the Parish of Ewhurst Green for your tremendous support in my fund-raising efforts for Alzheimer’s Research UK.

My tree was voted the people’s favourite, with many people telling me how moved they’d been by it.

Mum died eight years ago and ever since then I have asked people to make a donation to fund research into dementia either by making a donation to my latest fund-raising page or direct to Alzheimer’s Research UK rather than spending money on a Christmas present for me.

I have now run 31 marathons to raise money for Alzheimer’s Research UK and will continue to do so for as long as my legs will allow – defeating dementia one step at a time.

Susie Hewer is a strong campaigner and fundraiser for Alzheimer’s Research UK and has been made a Champion of the charity in acknowledgement of her outstanding support. Otherwise known as ‘the Extreme Knitting Redhead’, Susie has completed over 185 marathons including 32 ultramarathons. Since her mum Peggy died with vascular dementia in 2005, she has raised over £56,000 for the charity. Susie was the first person to run a marathon while knitting and set the Guinness World Record for creating the longest scarf over the 26.2-mile distance.
View all posts by Susie Hewer →

When will there be new Alzheimer’s treatments?
Christmas won’t be the same without Mum

2 Responses to Dressing the tree with memories