You are here: Home > Defeating dementia forever(est)
By Laura Hughes on 2 May 2014 5

You don’t have to be a hero to accomplish great things—to compete. You can just be an ordinary chap, sufficiently motivated to reach challenging goals”
Sir Edmund Hillary.

Sir Edmund was the first man to succeed in reaching the summit of Mount Everest. When it comes to great accomplishments, he knows what he’s talking about and his quote is certainly true for me. (Apart from the ‘chap’ bit!)

I’m no marathon runner or mountaineer but I wanted to attempt an endurance challenge before I turned 30 so, at 29, I was quickly running out of time. As soon as I saw the trek to Everest’s Base Camp, I knew that was the one. My friends thought I was joking, as I had never done any real hiking before, but I believed that I could do it. I wanted a challenge that would teach me something I didn’t yet know about myself. I wanted to discover what I was made of. In the words of Sir Edmund Hillary “It is not the mountain we conquer, but ourselves.”

When the going gets tough 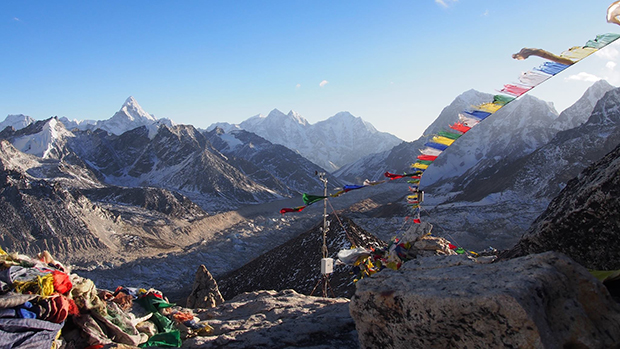 It wasn’t too difficult to get people to sponsor me when they found out what I was doing – I think most of my friends thought I wouldn’t make it and they’d get a refund!

In the end, those donations were one of the things that kept me going on the mountain when things got tough. The money I had raised, and the messages of encouragement that came with it, were constantly in my thoughts. It was like all those people were behind me, supporting me and pushing me onward and upward.

I kept thinking how Alzheimer’s Research UK would put the money to good use, and I knew I couldn’t disappoint them, or the individuals who would benefit from the research.

After 13 days of trekking, reaching altitudes of 17,500ft and temperatures as low as -20°C, walking for several hours and sometimes up to 20km a day (that was Christmas Day FYI) we finally conquered our mountain.

We started as 14 strangers but finished as great friends.

We started as 14 strangers but finished as great friends. That level of intensity and rawness really brings you together. You are stripped back to your true self, nobody has the energy for pretences and there is no hiding anything from anybody else, or yourself. The conditions are basic, to say the least, which doesn’t allow for anything but real honesty in the group – especially when all 14 of you are sharing one bathroom!

We had some really fun times though and we made the most of things, we shared a happy Christmas and a great couple of weeks together. I can honestly say it was the hardest thing I have ever done but also the most rewarding. Not only did I learn that I am much stronger than I thought, and that I can achieve anything I put my mind to, but I raised enough money to fund a whole week of dementia research.

For me, there was never any doubt that the money I raised would go to Alzheimer’s Research UK. I have been a live-in carer for more than two years now, and a healthcare assistant to the elderly before that. I love my job as it allows those whom I care for to stay in their homes and maintain a little independence – without someone there 24 hours a day, they would most likely be in a residential care home. When your memory is not what it was, this can be a traumatic move.

Through my jobs I have seen the devastation that dementia can bring down on a family. Not being recognised by your partner, parent or grandparent can be heartbreaking. My own great-grandmother, with whom I was very close, had dementia towards the end of her life, and it was awful seeing the strong, independent woman that I had grown up with become so lost and fragile.

The only way to stop losing our loved ones and their memories to dementia is through more vital research- funded by the efforts of ordinary ‘chaps’ like me sufficiently motivated to reach challenging goals.”

Support Alzheimer’s Research UK, like me, in the hope that more research will result in all of us holding on to our precious memories… And this is one I don’t ever want to forget.

Laura is a 29 year old psychology graduate from Wales. She now lives part-time in London and when she is not travelling the world she supports those with dementia in the community. Laura has always been interested in dementia research but has supported Alzheimer's Research UK since losing her great-grandmother, and great friend, to the disease in February 2012.
View all posts by Laura Hughes →

Why we made FaceDementia
What will they think of next?