You are here: Home > Down’s syndrome and dementia: what’s the link?
By Dr Laura Phipps from Science News on 2 October 2013 0

It often comes as a surprise to people that there’s a link between Down’s syndrome and dementia. But more than 60% of people with Down’s syndrome will develop Alzheimer’s – the most common form of dementia – before the age of 60. With our help, scientists are unravelling why.

The genetic information that helps to define us is divided into genes, which are wound up and stored in 23 pairs of discrete genetic units called chromosomes. Every person’s chromosomes are composed of the same general pattern of genetic information, although subtle changes in our genes are responsible for making us different to each other.

And this is where the link to Alzheimer’s comes in.

An extra dose of amyloid

One of the genes on chromosome 21 codes for the Amyloid Precursor Protein (APP), which is chopped up inside the brain to make the protein, amyloid. A build-up of amyloid in the brain is one of the hallmark features of Alzheimer’s, and while it’s still unclear exactly how amyloid contributes to the disease, it’s the focus of much research into new treatments.

It’s thought that because people with Down’s syndrome get an extra dose of APP, they can develop an excess of amyloid in the brain. This appears to make them much more likely to develop Alzheimer’s than someone without Down’s syndrome and at an earlier age. Despite this, not all people with Down’s syndrome will develop Alzheimer’s and understanding why some people don’t is another important avenue for investigation.

The unique genetic cause of Down’s syndrome makes it an important condition to study to help unravel the causes of Alzheimer’s and help those affected by both conditions.

Some researchers believe that it’s not just the presence of the APP gene on the extra chromosome that links Down’s syndrome to Alzheimer’s, but that the remaining genes on chromosome 21 could also be important.

This year, Alzheimer’s Research UK awarded funding to Dr Frances Wiseman at University College London to study this in more detail. Her research uses Alzheimer’s mice bred to have an extra copy of chromosome 21 (mirroring the genetic changes seen in Down’s syndrome).  However, due to a genetic glitch, the chromosome 21 in these mice has the APP gene missed off. Surprisingly, Dr Wiseman still sees faster rates of amyloid build-up in the brains of the mice, suggesting other genes on chromosome 21 could also be important. With our help, she will train up a PhD student to try to identify these genes, which could hold vital clues to the causes of Alzheimer’s. 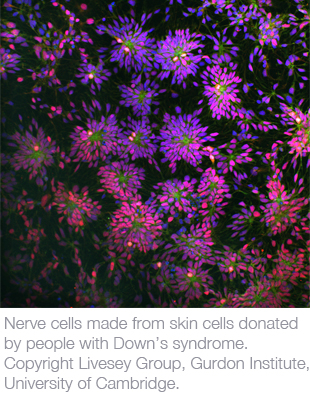 People with Down’s syndrome are also helping Dr Rick Livesey at the University of Cambridge to understand the molecular changes that occur in brain cells as a result of the extra chromosome 21. With our funding, his team used skin cells donated from people with Down’s syndrome and applied stem cell techniques to transform them into nerve cells in the laboratory. Amazingly, these nerve cells functioned and formed a network in the dish that replicated some of the basic functions of the brain. They also developed Alzheimer’s-like features, such as the build-up of amyloid.

These amazing cells are helping his team understand why Down’s syndrome is linked to Alzheimer’s, and study the causes of Alzheimer’s – relevant to everyone with the disease. They also provide him with an ideal platform for screening potential new drug treatments for Alzheimer’s, helping to speed up the drug development process.

Research into Down’s syndrome and dementia has not been a hugely resourced field in the past and we are pleased to be putting your money to good use investigating this vital link. It’s also encouraging to see this research being prioritised by other research funders in recent months.

To learn more about how genetic research and research using cells and animals is helping in the fight to defeat dementia, explore our virtual dementia lab.