The first question I was asked when people found out about Pat’s dementia is ‘How long has she had it?’. I know she was diagnosed in July 2012 but it is impossible to pinpoint when it began.

The second question is ‘Does she still know you?’. In Pat’s case she knew all her visitors until medication dulled her senses as well as her pain in the last two days of her life. Here I will attempt to give a personal view on how her illness progressed, charting eight phases of her FTD. Everyone with dementia is different and has their own experiences, this is how it was in our case. 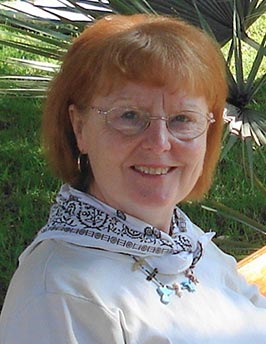 Hindsight gives you 20/20 vision which now suggests that the first signs of FTD were showing as far back as 2005 when Pat would have been just 54 years old. At the time some things seemed strange, such as arriving at our destination after a car journey and Pat not attempting to get out of the car.

In 2006 we went for a bike ride, going up a hill our speed slowed down and instead of putting her foot on the ground and dismounting, Pat simply fell over and hit the road.

In 2009 Pat began having problems with her driving. In September she hit a car pulling out from a driveway and worryingly didn’t stop. In December she drove through a roundabout and somehow rolled her new car over.

In 2010 problems increased at work. On July 27 she noted in her diary: “J told me that my colleagues didn’t have confidence in my abilities. Definitely going to resign in Dec.” Sadly even working as a nurse in the NHS her employer didn’t think that a rapid decline in her abilities after 35 years nursing might be due to illness.

Through 2010/11 Pat seemed to lose interest in most things that she had enjoyed doing for many years. She stopped knitting, couldn’t get motivated to do her embroidery and didn’t appear to be able to concentrate on what she was doing. She was happy to sit in front of the TV for long periods, often not even switching channels. Many a time I had to suggest to her that it was getting late and it was time for bed, she may have stayed in the chair all night if not encouraged to move.

In February 2012 she was having so much trouble with swallowing that she took herself off to see our GP. He was sufficiently worried to ask her to come back with me and so began a three-pronged investigation – neurological, depression and physical swallow obstructions.

For six months she had numerous scans and tests before we were given the devastating news that Pat had FTD.

Although Pat’s condition had worsened through 2013/14, things came to a head in March 2015 as she was finding it increasingly difficult to eat and drink. I became so concerned that I had to call in help. We got her a place at Kirkdale Nursing Home, initially for respite care. Leaving her that first time was the most difficult thing I’ve ever had to do. Thankfully they managed to get her eating and drinking again and she regained some weight.

Her general behaviour now became a problem. For example, on many occasions she would go into a room, plug the basin, turn the taps on and walk away causing a flood.

6. Trouble with balance and mobility

By the start of 2016 Pat’s balance was failing and at the end of January she had a fall and broke her wrist which needed a plate inserted in it. She never fully recovered from the general anaesthetic and despite efforts with a walking frame she was to be confined to a wheelchair for the last 18 months of her life.

At Easter 2016 we reached another crisis when her weight dropped drastically and a PEG tube was considered, but it was decided that she would be at great risk if she underwent the operation. However, once she came off her medication for osteoporosis she began to take food again and regained weight.

Despite her obvious frailty we were still able to get her out for ‘walks’ beside the River Tees and car rides out to the coast, parks etc.

Moving into 2017 other physical symptoms became more obvious. The fingers on her left hand began to contract, a general stiffness spread throughout her whole body and she began to have greater difficulty coping with syringe feeding, the only way she had left to take both food and drink. Throughout her ordeal with FTD her eyes remained bright and communicative, she retained some awareness of her surroundings often perking up considerably from external stimulation.

By July 17 Pat could no longer sit upright in a normal wheelchair and she was moved to a special chair. I often worried that she seemed to have some form of locked-in syndrome.

On July 18 her swallowing just about failed completely and by the following day she was confined to bed and her end of life care was initiated. Drugs to control her pain were introduced and the light went out of her eyes. Her breathing became more and more laboured. With her family at her bedside she slowly slipped away and at 3.30am on July 22 she took her last breath and was at peace.

I am running eight 5km parkruns in places that were important to Pat to raise money for Alzheimer’s Research UK. I began the challenge at Pat’s birthplace in York on August 12 and completed the second run at Richmond Park on August 26, close to where she initially trained as a teacher before deciding to become a nurse. The third run was on September 16 at Roundhay as Pat trained as a nurse at Leeds General Infirmary. I will be running at Guildford in Surrey on October 28, where Pat explored potentially becoming a nun. I will tackle the Croxteth Hall parkrun in Liverpool on November 4, close to where Pat trained as a midwife and where we met. I will then move on to Edinburgh on December 9 which is where we went on honeymoon. The penultimate run will be at Lancaster on January 20, where we first settled together and where our three sons were born. I will finish the challenge at my home parkrun at Tees Barrage on February 17, which would have been our ruby wedding anniversary. 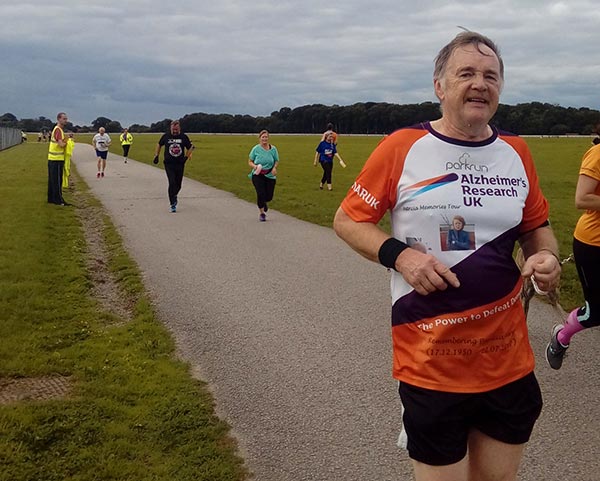 To sponsor me, go to www.justgiving.com/fundraising/patriciamemories

John Hirst is a 64-year-old retired industrial chemist living in Stockton-on-Tees. His wife Pat was diagnosed with frontotemporal dementia in 2012 and died in July aged 66. John cared for his wife until 2015 when she went into a care home. John is in the middle of a fundraising challenge to complete eight 5km parkrun events in places that were important to his wife, with the final run at his home parkrun of Tees Barrage in February 2018.
View all posts by John Hirst →

Celebrating Older People: Silver Sunday
The Blood and the Brain – where is the link?

10 Responses to Eight phases of FTD