You are here: Home > New Year’s Resolution: Get involved in dementia research
By Catherine McKeever from Science News on 31 December 2015 2

It’s that time of year again where we all start to think about what we can do to be better people. I’ve gone for the classics; I’m going to start at the gym, sort my diet out, and sign up to help beat dementia!

I know what you’re thinking, “help beat dementia? Not heard of that one before”, and I don’t blame you. Taking part in dementia research isn’t often at the forefront of people’s minds, but we believe this needs to change, and here is why…

Why is dementia research important?

There are currently 850,000 people in the UK living with dementia, a debilitating condition caused by brain diseases of which Alzheimer’s is the most common. Alzheimer’s doesn’t just affect memory, eventually it affects a person’s ability to walk, communicate and even swallow. It has a profound effect on the person and their family around them.

With no new drugs licensed for 12 years, and none available that can actually slow or stop the condition, it is becoming increasingly important to tackle it head-on with high-quality dementia research. However, a problem that many researchers face is having access to people willing to participate in research. We know that 62% of the public would be willing to volunteer for dementia research, but more than four out of five just don’t know the best way of going about it – a problem solved by Join Dementia Research.

Join Dementia Research is an exciting and unique opportunity that enables anyone, with or without dementia, to register their interest in taking part in research. Join Dementia Research is the first service of its kind and since its national launch in February, over 14,000 volunteers have now registered – over 3,700 of whom are already involved in studies.

Although these numbers are fantastic, we still need you. The key to beating the diseases that cause dementia is knowledge. We need to understand the smallest details about how the brain works under normal conditions, and how it changes in diseases like Alzheimer’s.

Registration to Join Dementia Research is quick and easy, taking 5-10 minutes in which you will be asked some questions about yourself and your general health. A match-making process then searches your information against the criteria researchers have set for their studies, and creates a list of the ones that you match to. 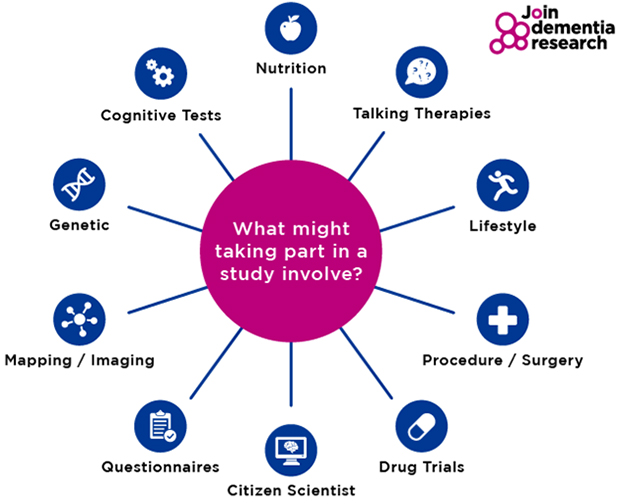 By signing-up, you are saying that you are open to hearing about what sort of research you could be involved in – registering doesn’t put you under any obligation to take part; you only get involved when you feel ready to do so. If you are a healthy volunteer, you could be asked to take part in surveys, questionnaires or even invited to have a brain scan. Researchers will use your healthy brain as a benchmark, allowing them to compare against the brains of people with dementia and uncover crucial differences that may otherwise go unnoticed.

What if there isn’t anything that appeals to me?

If you want to help to fight dementia, but getting involved in research isn’t for you, then it just so happens that we have loads of exciting stuff happening in 2016.  We have fantastic ways in which you could contribute, from running with #TeamARUKParkrun, to taking part in ARUK National Skydive day, or even joining our Cheer Squad. You can also make a donation to help fund one of our pioneering research projects. If you want to help beat dementia, 2016 is the year for you.

So, please join me in making a New Year’s Resolution to defeat dementia.

2 Responses to New Year’s Resolution: Get involved in dementia research