You are here: Home > Global action against dementia
By Dr Matthew Norton on 19 June 2014 0

Download our new report which examines the key statistics and sets out how we will address the challenge ahead.

The G8 Dementia Summit in December 2013 was effective at galvanising the international community and promising clear and decisive action to tackle dementia. The Summit saw international leaders launch the ‘Global Action Against Dementia’ initiative with the stated the aim of finding a disease modifying treatment or cure by 2025.

International Summits like this are great examples of the old proverb ‘the proof of the pudding is in the eating’. Words are great, but we desperately need action.

Dementia costs lives and huge amounts to the UK economy

Today we publish new research by the Office of Health Economics that shows the difference that could be made if we achieve the ambition of a disease modifying treatment by 2025. We have modelled an intervention that would delay the onset of dementia by five years and would become available in 2020. If we could achieve this there would be: 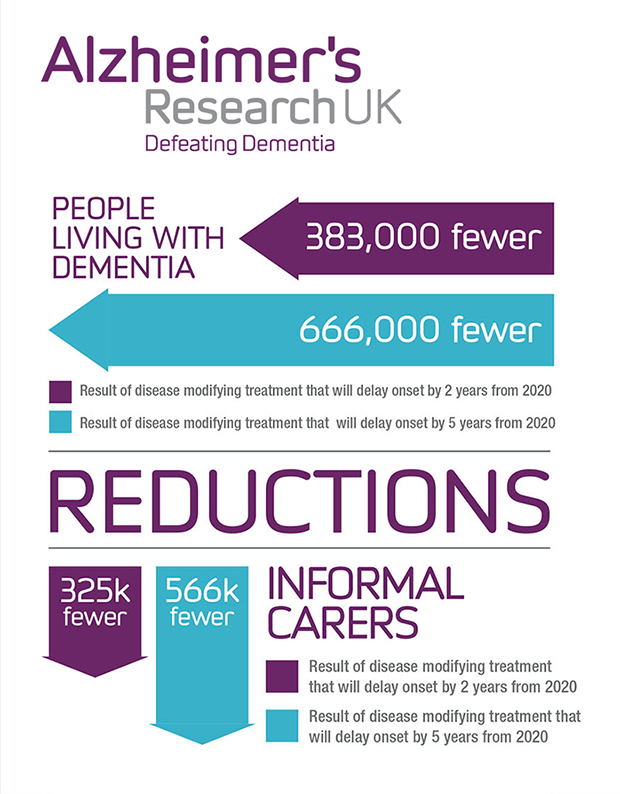 An intervention that delays onset of dementia would also generate huge cost savings to the economy. A treatment made available in 2020 that would deliver a five year delay of onset would cost the economy:

The potential is huge. A disease modifying treatment would improve the lives of hundreds of thousands of people, both those who would have had dementia and those around them. It would also generate significant savings to the UK economy. It shows why we need action now. 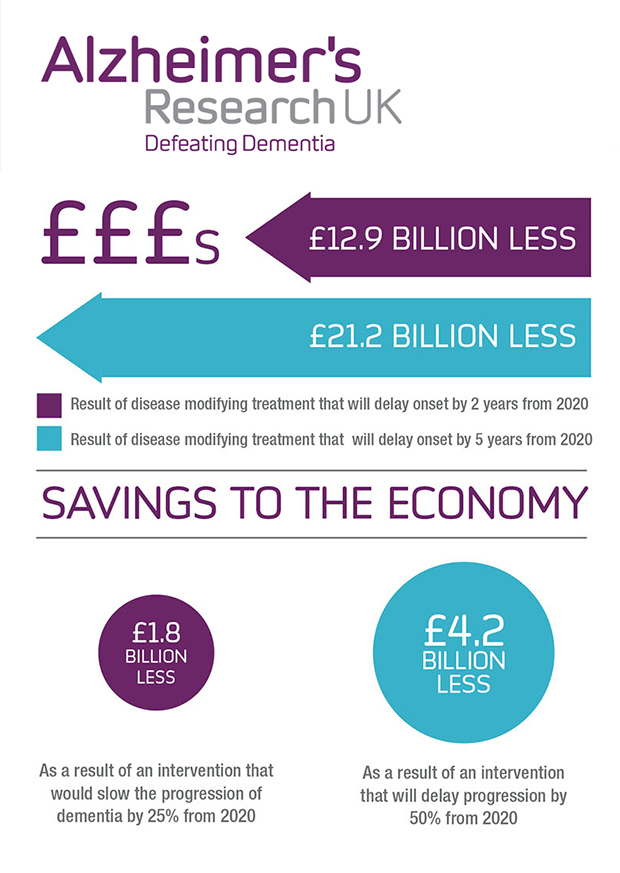 We are delighted that we have been able to work with the UK Government and the G7 to host the first legacy event promised at the Summit. This event will focus on how the global community can substantially increase investment in dementia research. It will capture the progress that has been made since December and set out activity for the coming year and beyond.

Progress so far has been good. Last month saw the announcement of the World Dementia Council (WDC), chaired by the World Dementia Innovation Envoy, Dennis Gillings. The WDC will champion innovation in dementia across research into diagnosis, treatment and care and by focusing on how to unlock far greater amounts of investment.

The goal is a global investment fund, much like the one developed to combat HIV / AIDS and the meetings in June will explore how the finance world can support efforts to prevent, delay and support people to live well with dementia. The event will:

It is imperative that we see substantial increases in investment into dementia research and support and there are some really exciting potential ideas in this area. The global fight against HIV / AIDS shows what is possible when the world gets together to defeat a disease. We can do the same with dementia. This is why it is exciting that Global Action Against Dementia is pulling together so many experts from the world of finance who can actually turn the vision into reality.

As the leading dementia research charity in the UK we will be leading the way.