You are here: Home > Hidden beauty, fascinating insights
By Katy Stubbs on 30 April 2020 0

Microscopic images reveal the hidden beauty around and within us. Dementia researchers get a unique view of the intricate but stunning workings of the brain. To showcase the fascinating insights being gained in dementia research, we ran our Science Image Competition again this year.

Over the winter months, we asked researchers across the UK to submit their best pictures that demonstrate the progress being made in dementia research. Thank you to everyone that voted for their favourite image in our public vote.

Winner – Stars on war by Juliana Silva, University of Portsmouth 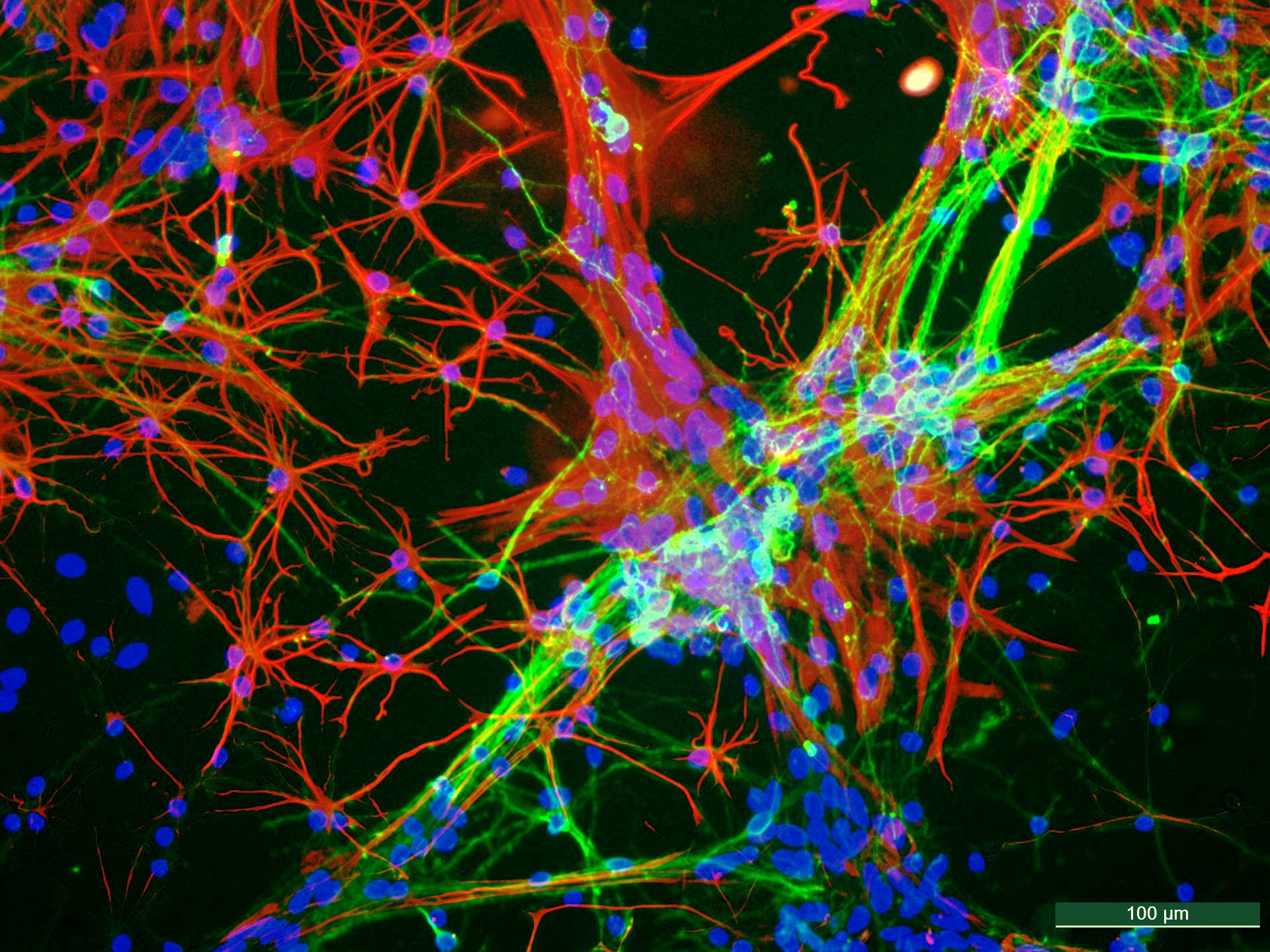 This year’s winning image is Stars on war, captured by Juliana Silva, a Masters student at the University of Portsmouth. Her image shows the dramatic relationship between different brain cells, astrocytes in red, and nerve cells in green.

In Alzheimer’s disease, connections between nerve cells, called synapses, are disrupted. This can lead to too much of a chemical messenger called glutamate being released when nerve cells communicate at the synapse. Astrocytes are support cells in the brain, and normally they mop up chemical messages at the synapse. But if they are overwhelmed, the glutamate can start to harm the nerve cells, setting off a catastrophic chain of events that can lead to nerve cells dying. In her research, Juliana is trying to find ways to reduce the damaging effects of glutamate, studying natural compounds to see whether they can help protect the brain.

With no treatments able to slow or stop the damage caused in Alzheimer’s and other dementias, Juliana wants to contribute to research efforts to find treatments than can improve people’s quality of life. Congratulations to Juliana for her beautiful winning image – it’s great to have such passionate and committed dementia researchers.

As well as our winning image, we wanted to share the other nine in the shortlist which showcase other important areas of dementia research. 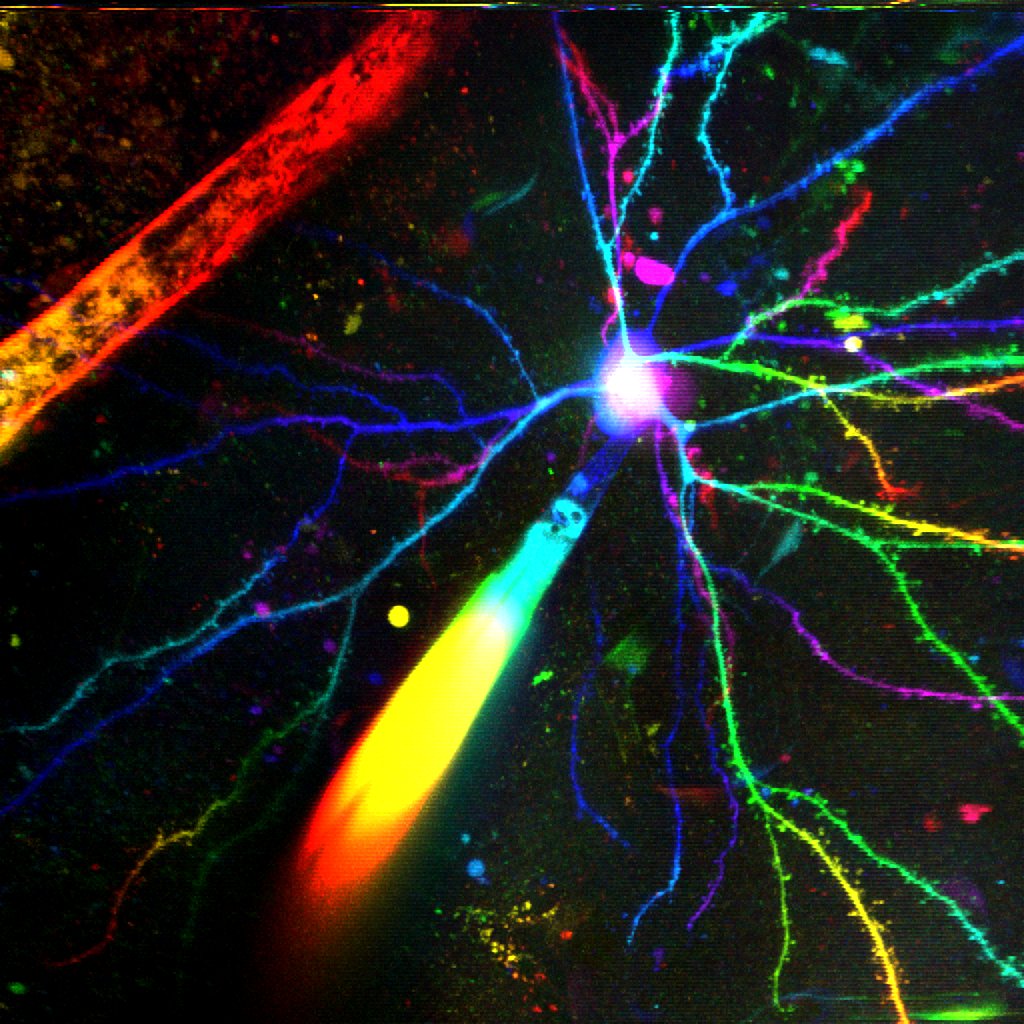 In this image, you can see the long branches of nerve cells, and all the little bumps along them are a connection point – a synapse. Researchers can measure communication in nerve cells by recording electrical signals. Coming from the bottom left you can see a rainbow coloured recording device, which researchers can use to understand how communication is disrupted in Alzheimer’s and other types of dementia. 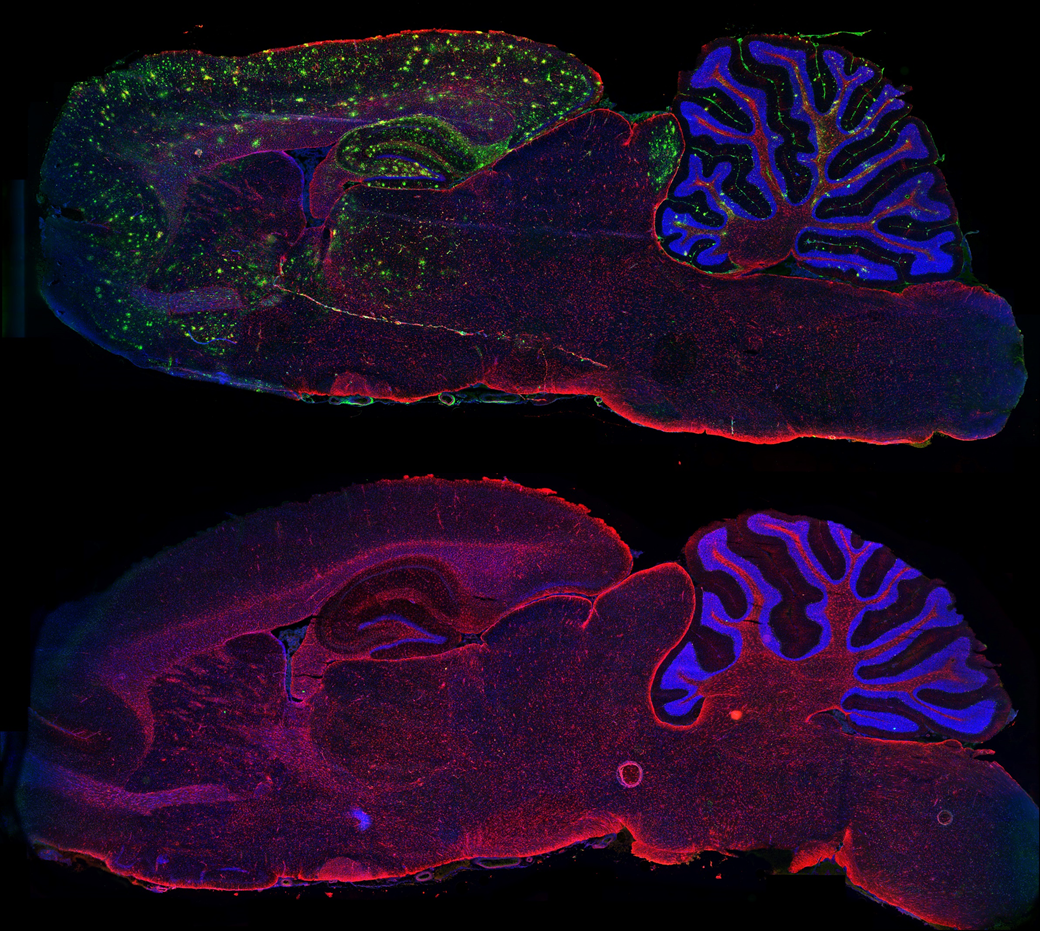 Here you can see the build up of amyloid in the brain of a mouse with features of Alzheimer’s disease (top). These clumps are seen in the brains of people with Alzheimer’s and are linked with damage to nerve cells and the symptoms of memory and thinking problems. Researchers study these green clumps to work out how they lead to people developing Alzheimer’s. 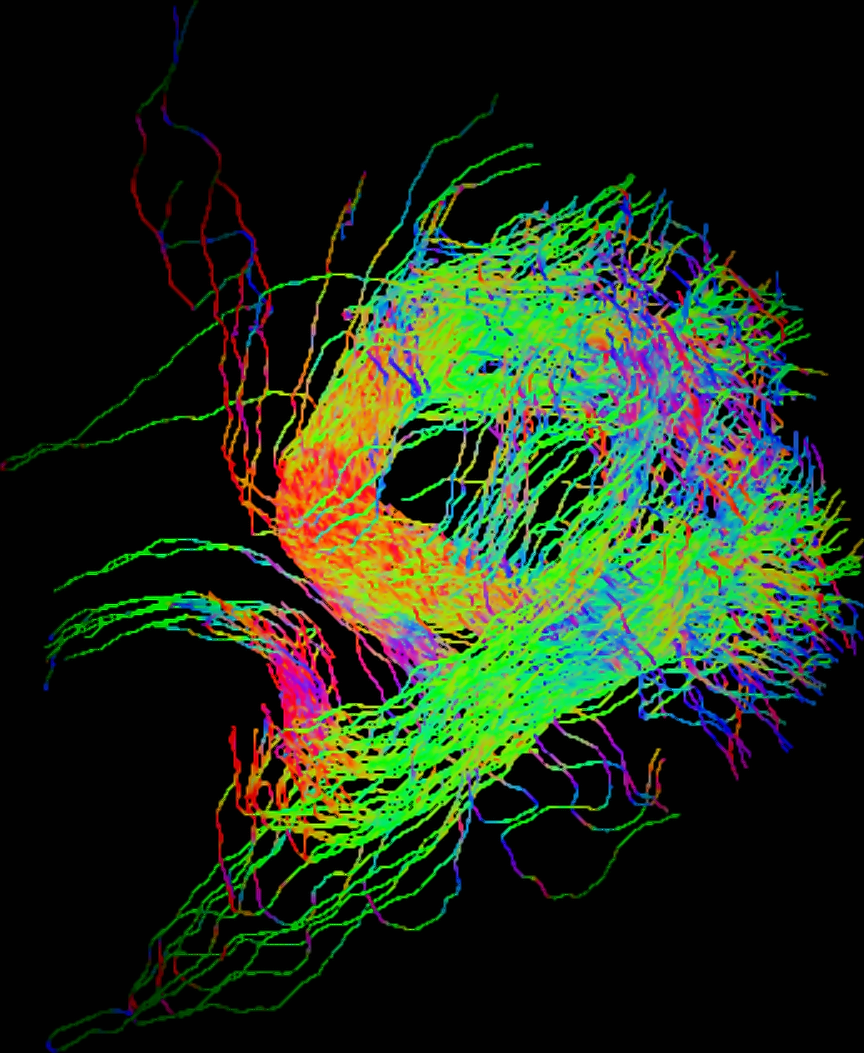 Symptoms of dementia affect more than just memory. People with dementia with Lewy bodies and Parkinson’s dementia often experience visual hallucinations. This image is from a brain scan that reveals the wiring of the brain and how different areas are connected. By studying these connections, researchers are trying to understand how changes to them can lead to people seeing things that aren’t really there. 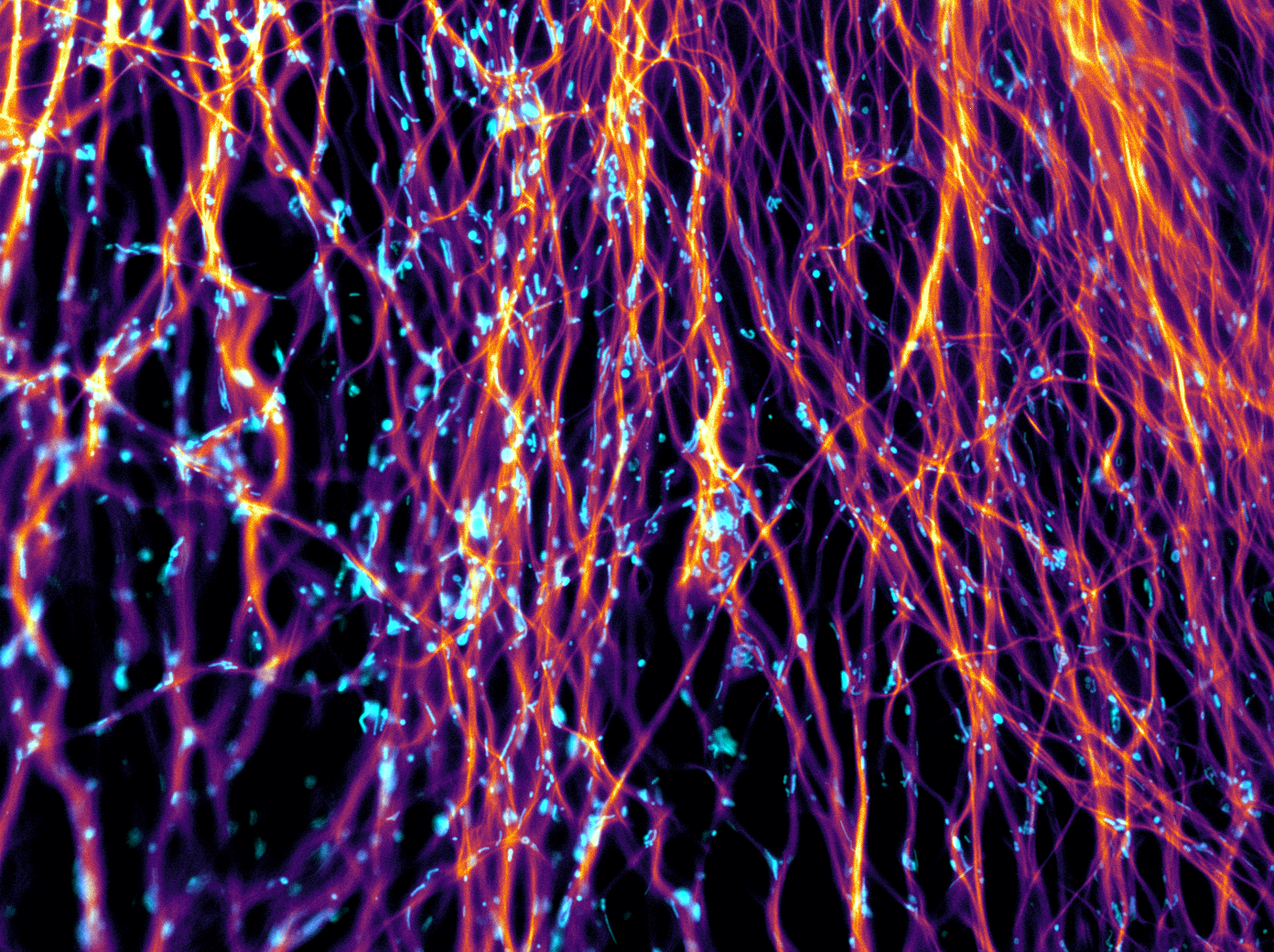 As well as studying how nerve cells connect up with each other, researchers want to understand detrimental changes that may take place inside these cells. This picture shows the long arms of nerve cells which look a bit like wires. In orange you can see important scaffolding within the cells called microtubules. In blue are the mitochondria, the powerhouses that generate energy for cells. Both microtubules and mitochondria are disrupted in Alzheimer’s disease and other dementias. Researchers are studying them to understand how this happens, and whether these changes can be slowed or stopped. 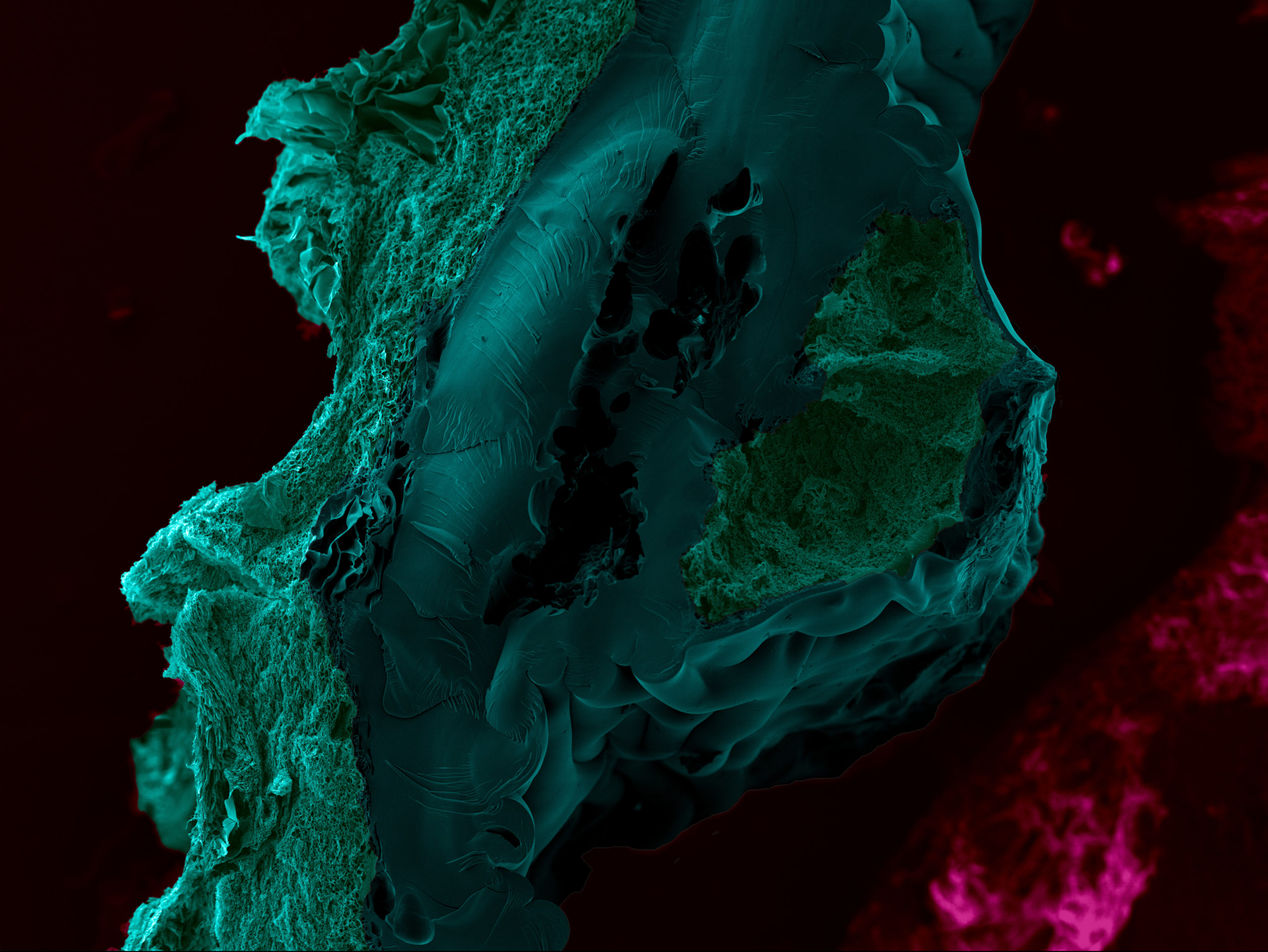 Researchers hope one day to be able to regrow nerve cells as a way to treat diseases of the brain. To do this, they need to create materials which have the right structure and environment in which cells can grow. In this image you can see a gel-like material and the holes within it that could be used to help grow nerve cells. 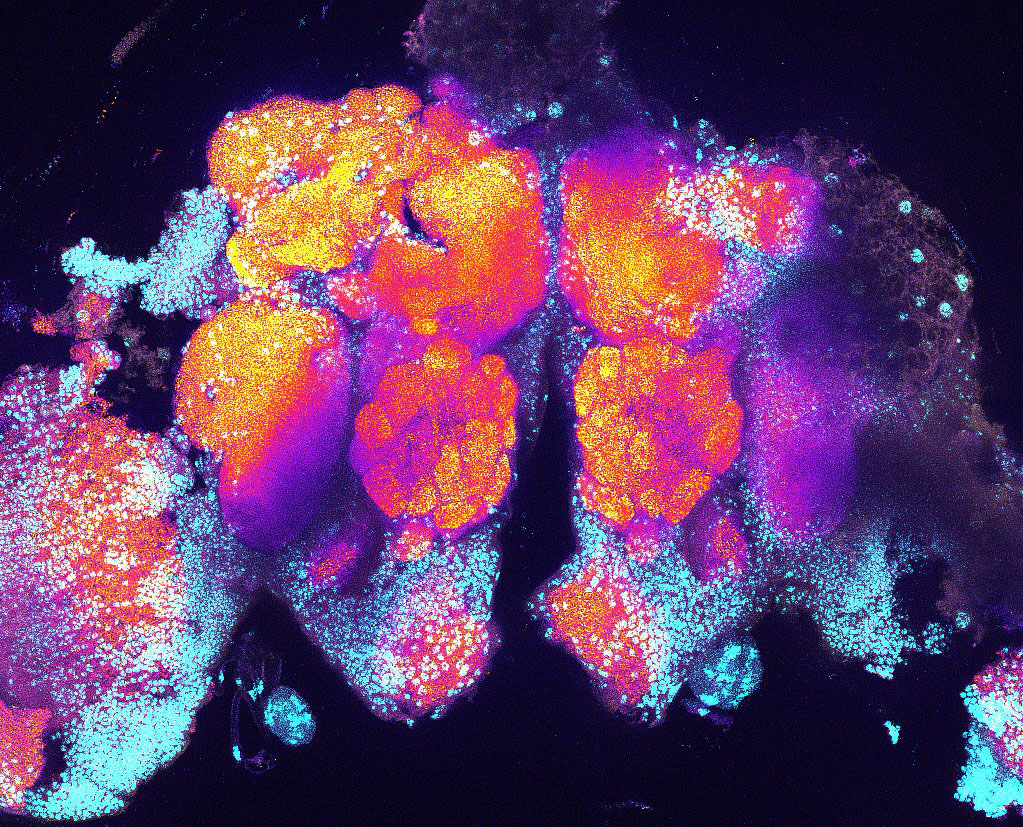 Scientists can look beyond humans in their search for answers about how dementia affects the brain. This picture shows the brain of a fruit fly. Though much smaller and simpler than our brains, fly brains are built in much the same way and studying them is easier and quicker. In orange and purple, you can see all the nerve cell connection points in the fly brain. Researchers are studying these to understand how toxic proteins spread from cell to cell across the brain, causing damage like in Alzheimer’s. 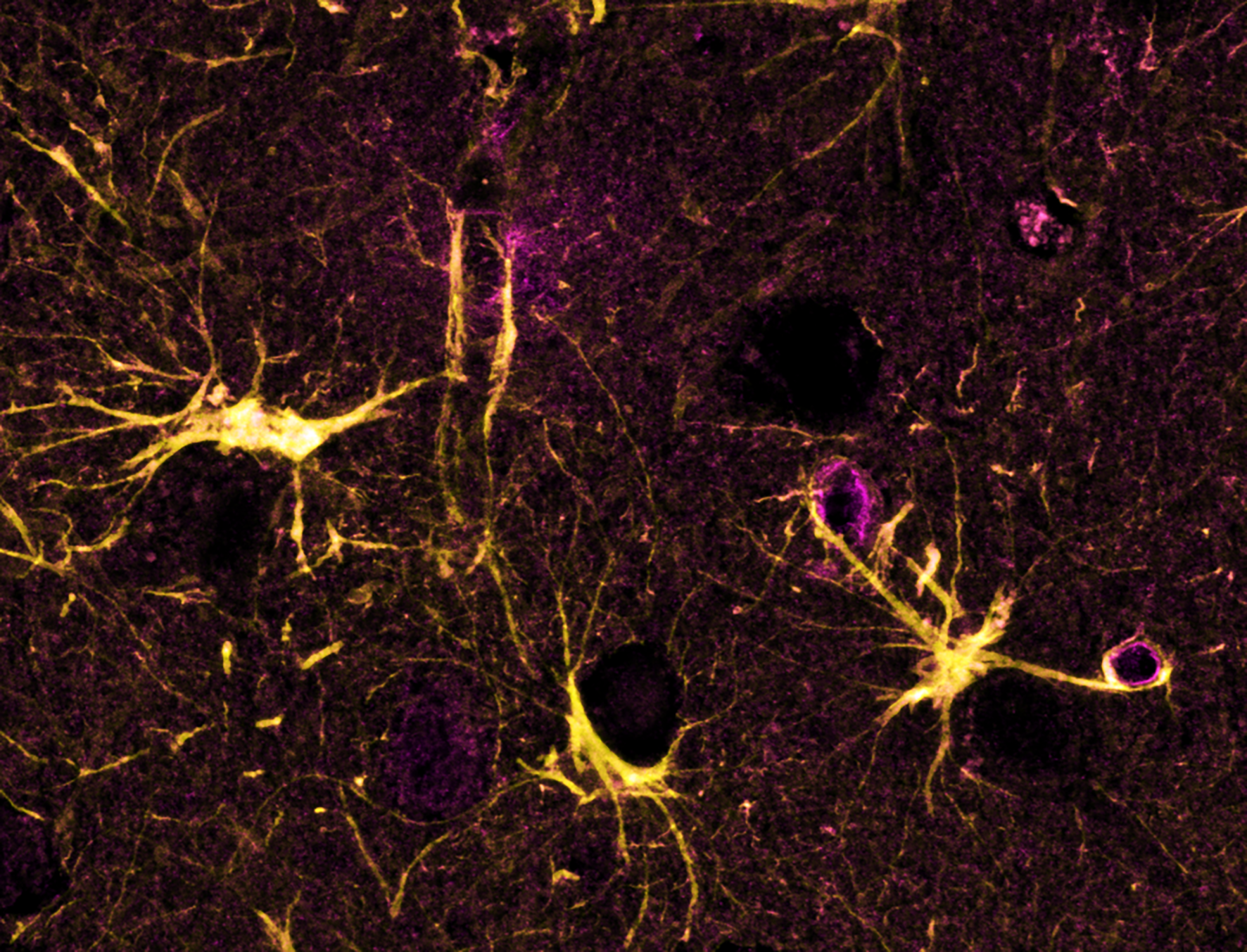 It’s not just flies, but also dolphins that may hold clues about how dementia affects the brain. Scientists in Scotland have discovered that beached dolphins show similar changes in their brains to what we see in people with Alzheimer’s disease. This image shows brain support cells called astrocytes (yellow) wrapping their long arms around blood vessels with amyloid build-up (purple). 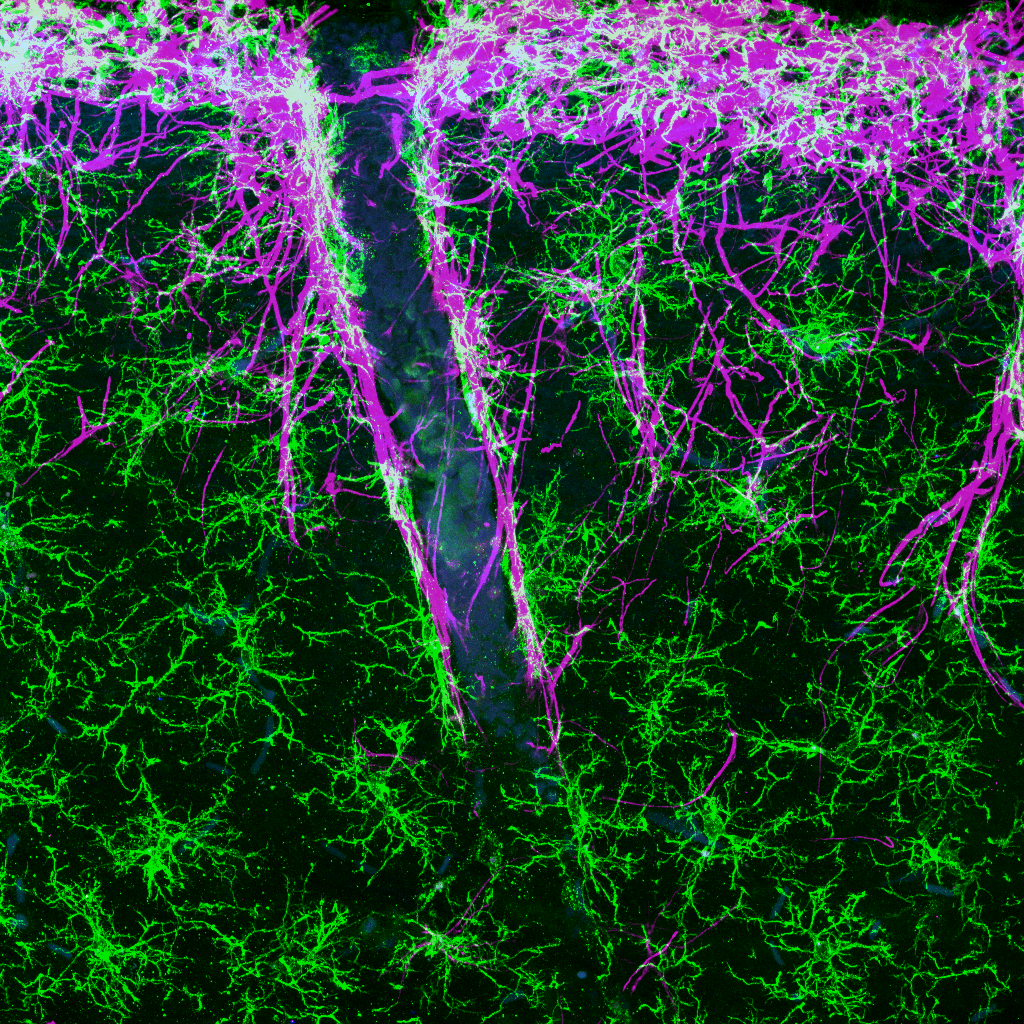 This image shows the protective barrier around blood vessels in the brain, formed by support cells called astrocytes (purple) and microglia (green). These cells try to prevent damaging molecules from entering the brain, while letting through vital oxygen and nutrients carried in the blood. In Alzheimer’s disease, these cells can start to overreact, and researchers think that what starts out as a protective response can go too far and lead to damage to nerve cells. 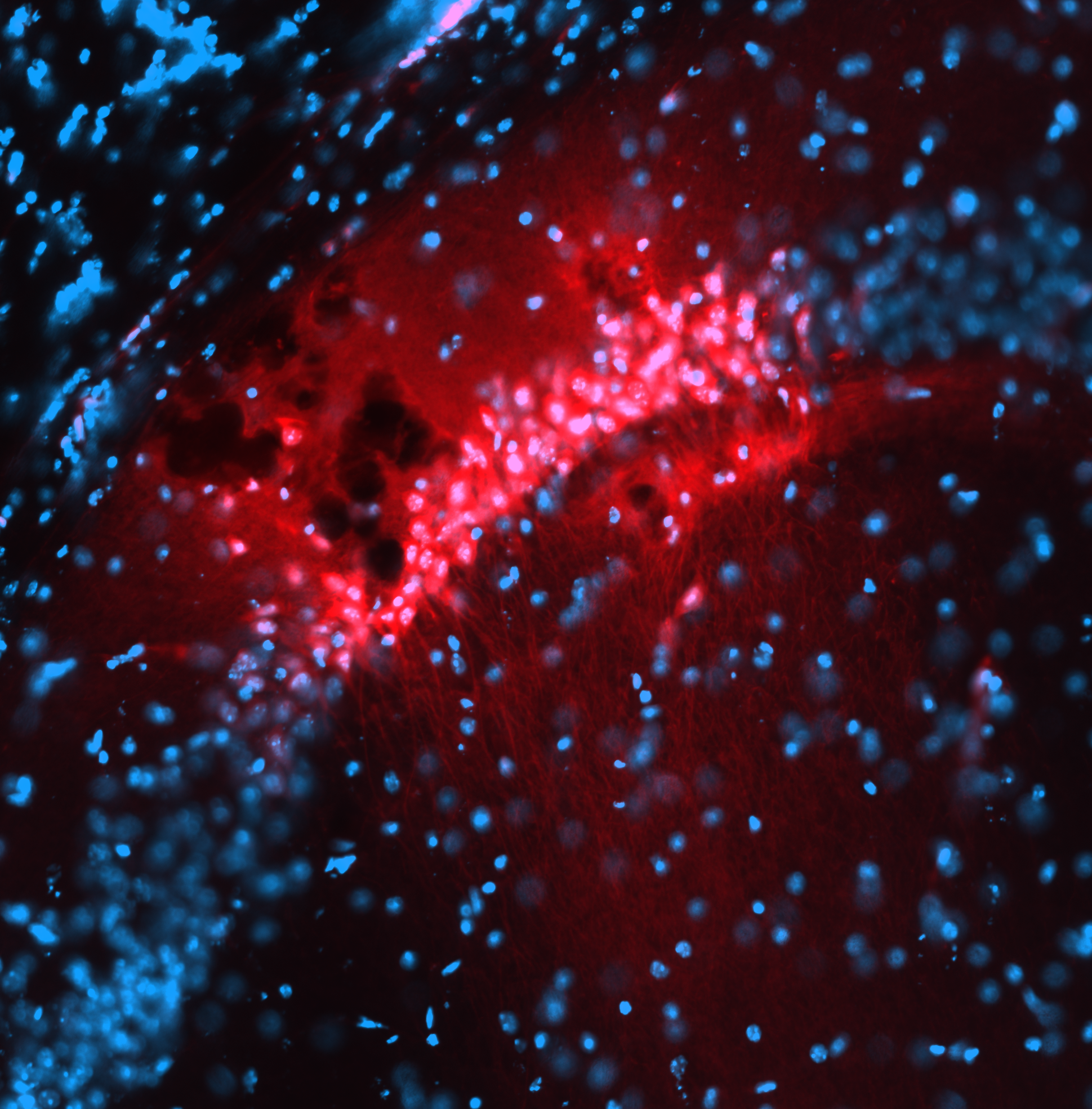 The protective barrier around blood vessels in the brain means that it can be difficult to design new dementia treatments that can get into the brain. Researchers are exploring whether they can use ultrasound to create gentle vibrations which allow tiny bubbles of drugs to enter the brain. In this picture, you can see bubbles of drugs in blood vessels (red) trying to get to the nerve cells (blue). If the researchers find that this method is safe, it could make it a lot easier to create new dementia treatments.

These beautiful images reveal the huge variety of dementia research that takes place in laboratories across the UK. The knowledge gathered by experiments like these is helping to grow our understanding of what’s happening in the brain in dementia.

Even in current times when researchers are away from the labs, their work continues as they analyse images like these.  Dementia research goes on, and we know it will continue to make breakthroughs possible for everyone affected by dementia.

View all posts by Katy Stubbs →