You are here: Home > The eyes have it – how eye movements are affected by posterior cortical atrophy
By Tim Shakespeare on 29 April 2015 1

Many different systems and structures come together to give us a rich visual experience of the world around us. One structure is the eye, providing a clear visual input. Another is the understanding of that visual signal by the brain, which interprets information from the eye to give us a perception of what and where things are. Yet another important aspect of our vision is our eye movements. Although we don’t think about it or perhaps even realise it, we’re constantly moving our eyes to bring areas of interest into our central vision. This is because we have much better resolution in central vision. Through our experience of working with patients, we realised that eye movements could be important in posterior cortical atrophy (PCA).

PCA is a rare form of Alzheimer’s disease which affected the late Sir Terry Pratchett. It affects the part of the brain involved in controlling vison first, so those with PCA experience visual symptoms before memory problems. We had two questions we wanted to answer; how are eye movements affected by this condition, and could studying eye movements tell us more about how people with PCA see the world? My recently-published study aimed to address that first question – whether eye movements are impaired in people with PCA, compared to people with typical Alzheimer’s disease – where memory is affected first – and healthy participants. We assessed participants’ eye movements using special cameras that measure where people are looking, whilst they view a computer screen. 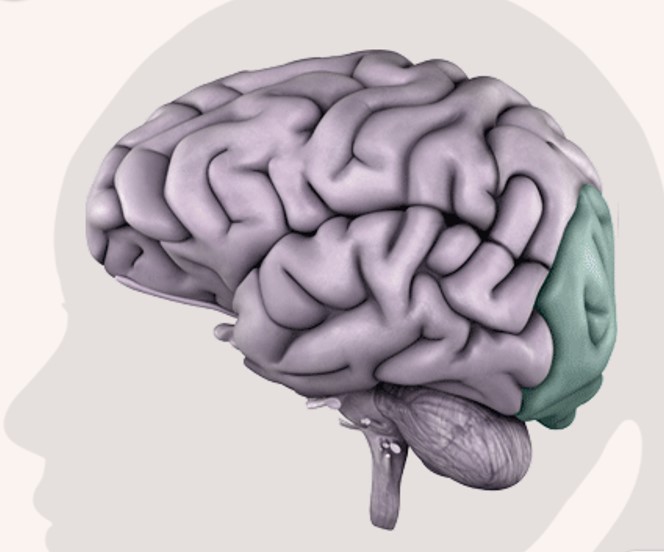 The occipital lobe interprets information for our eyes. When it becomes damaged in PCA, people can experience difficulties seeing where and what things are.

It was the assessment of saccades (those eye movements that move our fixation from one place to another) that revealed the most striking differences in the PCA patients. People with PCA were much slower to make these kinds of eye movements, and often their eye movements were very short. They weren’t able to reach the target in one quick and efficient step, instead using a number of shorter saccades to get from the starting point to the target. This was quite different to the healthy participants and people with typical Alzheimer’s disease who were much quicker and more accurate. We think both a difficulty in seeing exactly where they needed to move their eyes and a reduced ability to control the eye movement effectively could explain why people with PCA find this task difficult. Whilst previous studies using more simple ways of measuring eye movements found that a small proportion of people with PCA had these problems, our study using a more detailed and sensitive technique found that the majority of people with PCA have difficulties with these tasks. These could be useful features to look for carefully when assessing PCA patients. They could also be important to consider when trying to gain a better understanding of what it is like to have PCA, and when thinking of ways in which we might help to compensate for the visual problems that people with PCA experience.

Why a diabetes drug may offer potential treatment for Alzheimer’s disease
Were you mine?