My name’s Chris Wright and since 1 January 2015, I’ve run at least 5km per day, every day, to raise funds and awareness for Alzheimer’s Research UK. 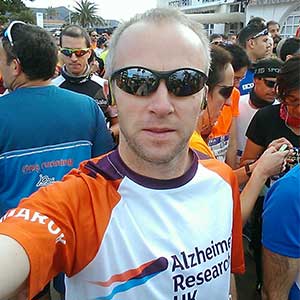 Last year that was exactly the challenge – to run every single day. This year I’ve changed the rules a bit and my task is to run 2016km in 2016. I can spread this out however I like, but still I’ve yet to miss a day (and I know I’ll be gutted when I finally have to!). As I write I’ve just completed 18 months without a day off, run over 3,000km and am fitter than I’ve ever been in my 47 years.

The idea of the 5k-a-day came, like all ‘great’ ideas, over a few beers with our neighbours here in Sitges, where we live – it’s a seaside town just down the coast from Barcelona. They were mentioning that a group of people they knew had started doing the challenge one year but had all gradually dropped out, the last sometime in the September. I didn’t immediately stand up and shout “I shall be the one to do this!” or anything, but the idea must have taken root and slowly spread through me.

Later in 2014, I let slip to my wife Sarah (over a glass of cava this time) that I’d been thinking about the 5k-a-day thing and wondering if it would be feasible. This was not a trivial commitment to make of course, and my rather complicated commuting schedule (I work some of the time in Amsterdam) was going to make it even more challenging. But, like most things in life, I was sure this was achievable as long as I was prepared to work for it.

On Amsterdam days, I get up at 6am and go and run through the sleepy city before work. On weekdays in Spain, I usually run at lunchtime, though I try to go early morning here too during the summer months. Usually the most challenging days are at the weekend when I have to squeeze a run into our often ferocious schedule of children’s activities and other social commitments. 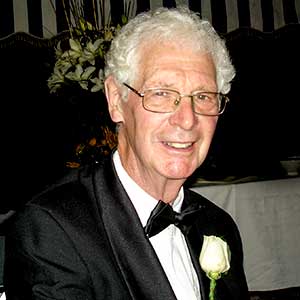 About ten years ago my wife’s dad, Les Hurst, started showing signs of Alzheimer’s. This got worse and worse until it was no longer possible for Sarah’s mum Mary to look after him and he moved into a residential care home nearby. Continuing to deteriorate, his plight was a constant source of heartache, pain and guilt for the whole family.

He also unwittingly became the inspiration behind my and Sarah’s fundraising – we ran half-marathons and raised money for Alzheimer’s charities. It was clear to us that any run we did would be in aid of trying to ensure that other families did not have to go through what ours was.

Les died in November last year; a release and relief in some ways. But also the chance to finally mourn the generous life and soul of the party that he was before his personality was ripped away by this cruellest of diseases. In his memory I keep on running.

If you’d like to support me, you can find my fundraising page here. You can also follow my progress on my blog here.

Chris Wright is a keen runner and fantastic fundraiser for Alzheimer’s Research UK. Originally from Sheffield, Chris now lives in Spain with his wife and kids. He lost his father-in-law to Alzheimer’s in 2015, not long before completing a year’s 5k-a-day running challenge.
View all posts by Chris Wright →