You are here: Home > If at first you don’t succeed: My Jurassic Coast Experience
By Diane Hill on 31 August 2018 0 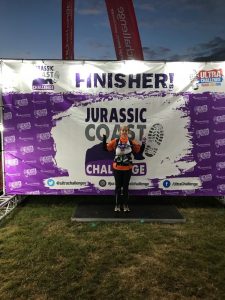 In 2016, Diane Hill was inspired to take on a 100km trek for Alzheimer’s Research UK, the chosen charity of her employer, AXA Insurance – but the challenge didn’t go as planned. Instead it sparked a two-year journey that saw her transform her fitness levels and last month, Diane successfully ran and walked 100km non-stop from Poole Harbour to Bridport for our Jurassic Coast Challenge. She explains what it felt like to cross the finish line.

In 2007 I was almost 17 stone and was diagnosed with a medical condition which was partially weight related. This was the start of my weight loss journey. By 2012 I was down to 10st 3lb and was ‘dabbling’ in running, having done the odd 10k (when I say ‘odd’, I mean two). I’d just met my now husband and was content and ‘happy eating’, and my weight was starting to creep back up. Fast forward to 2016 – the year Jonathan and I were getting married. Our wedding was planned for July, and earlier on in the year I decided to help get my weight under control, I would sign up through work to take on a big challenge – the 100km Race the Tide, a trek from Melrose to the Holy Island of Lindisfarne.

Well, training didn’t go according to plan. What with planning the wedding I simply didn’t have enough time and then, following the wedding, I ended up gaining a few extra pounds. So when challenge day came and we set off, I was so unfit, unprepared (physically and mentally) and not ready – but I gave it a go. I made it to 31.5 miles in 14 hours and was broken: my boots had ripped my feet to pieces, and I had to quit. I was such an emotional wreck for days after. Whenever people asked me how I’d done, I would break down crying. I felt I had let people down, especially the people who had sponsored me.

So, the following year I decided to take up running and joined my local running club, Wigan Harriers. I found myself taking on many 10ks, sometimes two a month. And when I saw an article at work for another 100km journey in aid of Alzheimer’s Research UK, I went from ‘No, not doing it’ after the emotional turmoil of Race the Tide, to ‘maybe – I will look into the logistics of it’, to ringing my husband and saying ‘I’ve booked it, you need this time off work, we’re off to Dorset’ – all within a day.

At this point the furthest distance I had run was 10km. So I quickly signed up to a couple of half marathons and eventually, as part of my training, completed my first ever marathon – the ‘Lakeland Trails Coniston Marathon’. My fellow running club members couldn’t believe it, as even people who are far more experienced than me said this challenge had broken them. But this time I was mentally ready for it and completed it in 6 hours and 5 minutes. After doing this, I knew I was ready for the Jurassic Coast Challenge. 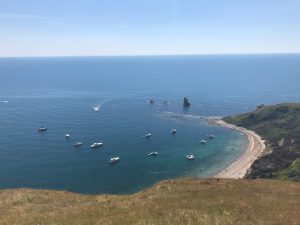 I stuck to the 16 week training plan provided, but an Achilles injury halted it for a few weeks, when I needed to rest. I knew from Race the Tide that to accomplish my challenge, I needed to put in the training and not wear hiking boots. It was running trail trainers and my trusted road running trainers that were going to get me over that finishing line.

When race day arrived, I was ready and raring to go. My plan was just to get from check point to check point – I knew the biggest distance between two check points was 11 miles and I was more than capable of doing this distance. The day flew by and the check points were ticked off one by one – and before I knew it I was crossing the finishing line, after 21 hours, 55 minutes and 28 seconds. My husband was waiting for me and I was so emotional. To actually finish, and in such good time after Race the Tide, was an amazing feeling.

My first words to my hubby were ‘If I say I’m saying I’m signing up to another 100km don’t let me’ …ha ha! Days later I’d registered my interest in the Peak District 100km, and I’ve already signed up to a 75km Canalathon in March next year (which involves 46.6 miles of flat running along the canal, with an 11-hour cut-off time to complete the race). I will be continuing my fundraising efforts for Alzheimer’s Research UK. 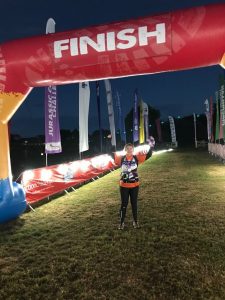 My fundraising target for this challenge was £425. I am currently at over £1,500 before Gift Aid is taken into account. Initially I asked family members, friends and running club members to sponsor me. Then I had a thought: in February I attended the very popular ‘Mad Dog’ 10km race in Southport. Tickets are like Willy Wonka’s Golden Tickets and sell out within hours. So I took the initiative to contact the Race Director and see if he would be willing to gift me a place in next year’s race to raffle off, and to my amazement he did. I raffled it off in return for a minimum donation of £2 and raised over £200. My employer, AXA, have also donated £150 too.

I’m lucky in the sense that I haven’t had any family that have been affected by Alzheimer’s or another form of dementia. However, I am well aware that dementia research is massively under-funded in comparison to conditions like cancer, and know that there is a possibility that this terrible condition may affect me directly in the future. I will continue to support Alzheimer’s Research UK; it’s become part of my life.

Diane is a Motor Fleet Underwriter at AXA Insurance and has been supporting Alzheimer’s Research UK for three years. Diane has raised over £2,500 by participating in crazy challenges. This trend is set to continue into 2019 with the next challenge already booked – a continuous 100km run through the Peak District. Although neither Diane nor her family have been affected by dementia, Alzheimer’s Research UK is a charity she is passionate about and will continue to support.
View all posts by Diane Hill →