You are here: Home > Football and dementia
By Robin Brisbourne from Science News on 13 November 2017

In his documentary programme Dementia, Football and Me, former footballer Alan Shearer investigates a potential link between playing football and the risk of a form of dementia related to head injuries. His documentary follows a small study we reported on earlier this year which pointed to the need for more research into an issue that other sports are already having to grapple with.

In 1928 the term ‘punch-drunk’ was coined to describe physical and psychiatric symptoms experienced by some boxers following years in the ring. Later the term ‘dementia pugilistica’ was used to describe these symptoms in boxers. Since the 1960s, the term chronic traumatic encephalopathy (CTE) has been used to describe long-term neurological side-effects of repeated head injuries sustained in any context, not just boxing.

CTE is thought to exhibit a distinct pattern of changes in the brain. While these share some similarities with Alzheimer’s, such as the build-up of abnormal tau protein, the changes in CTE appear unique compared to other causes of dementia. Because the symptoms of CTE overlap so much with other dementias, a diagnosis of CTE is currently not possible during life – only at post-mortem.

American football is a high contact, high speed sport where professional players often experience multiple concussions. The question of whether these concussions might lead to neurological problems in later life has been a major issue in the sport in recent years. The topic was even taken up by Hollywood in the 2015 Will Smith film Concussion, which told the true story of Dr Bennet Omalu, a doctor who fought to bring evidence of CTE among American football players to light.

Dr Omalu’s findings – and evidence of other long-term consequences of head injuries sustained in an American football career – have meant that new regulations have now been put in place to govern the number of high impact ‘contact practices’ NFL players can take part in. More stringent rules also apply to when a player who has experienced concussion can return to the field.

Unsurprisingly, attention is turning to the possible effects of head injuries in sports more popular closer to home. There was controversy in Premiership Rugby last December when Northampton allowed the Wales wing George North to return to the pitch after appearing to lose consciousness. The decision was deemed to have breached concussion guidelines – rules that have been tightened in recent years to better protect the welfare of players.

There has been a lot less research into the neurological consequences of head injuries in rugby compared to American football, though there is some limited evidence of a link with CTE and dementia. The Rugby Football Union is now working with former rugby players in a major research study to explore how a history of concussion might be related to neurodegenerative diseases in later life. 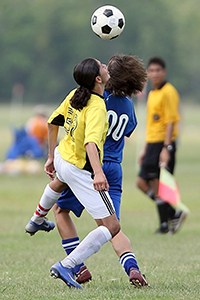 While we might not associate the beautiful game with the same high impact collisions as sports like rugby or American football, it is unique in that players purposely use their heads to control the ball. An average player will head the ball at least 2000 times in a 20-year career, and likely thousands times more in drills and practices. It is not yet clear whether the relatively low-impact strikes from heading a ball could cause effects similar to high speed collisions and concussions, but more interest is beginning to be paid to the potential consequences of this technique.

Recently, media attention has fallen on cases of footballers who have developed dementia such as that of former England football star Jeff Astle, a prolific header of the ball, who died of early-onset dementia in 2002. Reports that four of the eight surviving members of the 1966 world cup-winning squad are living with dementia have also led to calls for more research into a possible link.

A study where repetitive low-impact head injury was linked with dementia in footballers featured received a lot of attention in the media in early 2017. It can’t tell us whether footballers are more likely to develop dementia, but it could point to a relationship between football and CTE. The researchers examined brain tissue of six ex-footballers who died with dementia. They found that four of the six had CTE. For comparison, the authors note that just 12% of older people with dementia would generally be expected to have CTE. While this is an extremely small study, it does suggest that CTE might not just be an issue for more obviously high contact sports. However, as several of those in this study also had changes in their brain associated with other neurodegenerative diseases like Alzheimer’s, we also can’t conclude that the CTE damage was behind their symptoms. It’s early days for what we can conclude from this study but it does shine fresh light on the need for larger and more detailed studies to improve our understanding and inform approaches to ensure people can enjoy sports safely.

More than 265 million people play football making it the most popular sport on earth. Like all sports, it’s a way that people can be physical activity and socially engaged – two lifestyle factors that are associated with a reduced risk of dementia as well as numerous other health benefits. More research is needed to shed light on how aspects of sports like football and rugby might impact brain health, but these findings will need to be considered in the context of the well-established benefits of leading a healthy life.

To find out more about the factors that influence dementia risk, visit our risk reduction information.

If you want to be part of the research that is helping us to understand dementia, you can sign up to volunteer for studies at www.joindementiaresearch.nihr.ac.uk or calling our Dementia Research Infoline on 0300 111 5555.