You are here: Home > In the news: What is healthy ageing and how do we know we’re doing it?
By Dr Laura Phipps from Science news on 7 September 2015 0

But it’s not just about a long life as much as a healthy one.

How do we define healthy ageing and can we measure it?

It’s not just about a long life as much as a healthy one.

To many people, healthy ageing is a combination of several factors – few health complaints and chronic conditions, being mentally and physically active, feeling positive and part of society, and having a good quality of life. But some people seem to be better at ageing well than others.

In 2014, US researchers sequenced the genomes of 17 ‘super-centenarians’ (people over 110). They didn’t find one single culprit gene responsible for their long lives but suggest that some people may have a collection of genes that make them hard-wired to have a longer life. I’m sure it’s not just my family that has tales of particular generations of ancestors that ‘always lived to a ripe old age’. Another study of the genome of a 115 year old women found many small tweaks in the genetic code of genes regulating the immune system.

To complicate the matter, we also know that lifestyle factors such as smoking, poor diet and physical inactivity throughout life can contribute to chronic health conditions like heart disease, cancer, diabetes and dementia – all conditions that can limit a person’s ability to reach a healthy older age.

The papers are reporting today that a global research team – including researchers at King’s College London – have developed a test to measure a person’s biological age. The research, part-funded by Alzheimer’s Research UK and the Medical Research Council (MRC), studied a molecule called RNA in cells in the body. RNA has many important functions but one is to act as a molecular go-between, turning the genetic code that makes up our genome into the proteins that drive our cells. The RNA we have is dictated by the code that makes up our genome, but also by environmental factors that could influence which genes are tuned up or down over the course of our lives. 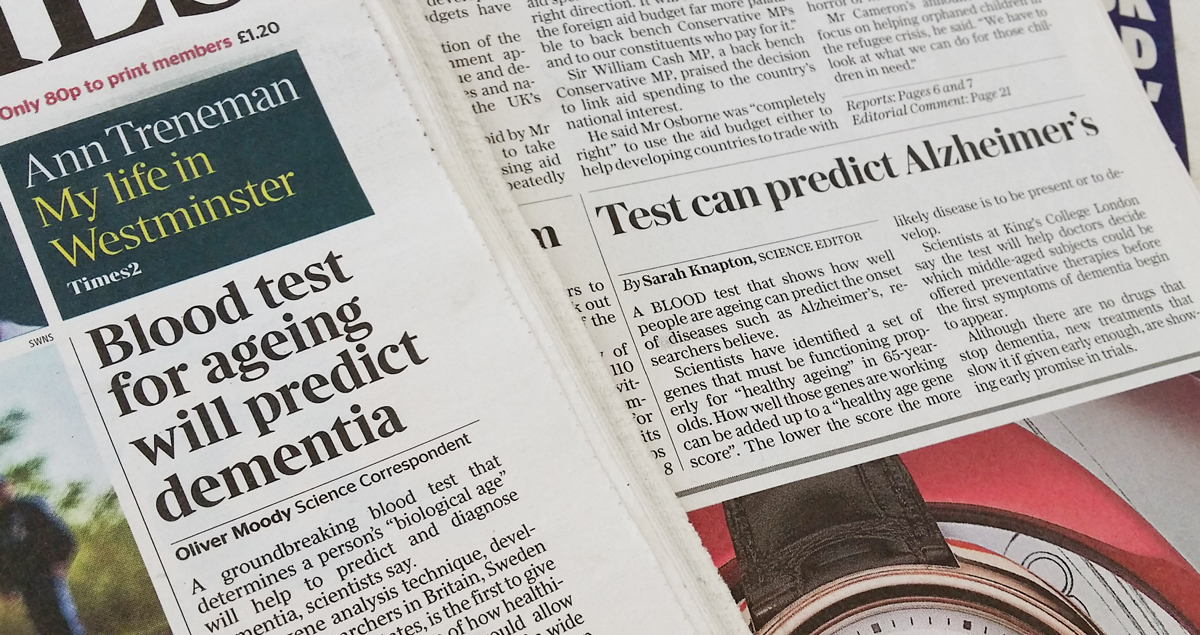 The news of the research study made the front of a number of national newspapers, including The Times and The Telegraph (above).

The researchers studied RNA in human muscle, skin and brain tissue of healthy young and older people and found an RNA signature of 150 genes that distinguished the two groups. This test, the researchers say, could be a signal of so-called ‘healthy ageing’. This 150-gene profile differed across muscle samples taken from 108 people who were all 70 years old, suggesting that people’s ‘biological age’ (as judged by the test) and their age on paper don’t necessarily match up. Interestingly, the score didn’t seem to be influenced by health conditions such as high blood pressure and diabetes, although we know these are factors that influence how well people age.

The team tried to gain more detailed insight into the 150 genes and what they do, in the hope of unlocking new avenues of research into the ageing process. However, the genes in their profile didn’t all fall neatly into certain biological categories, meaning that the molecular processes driving healthy ageing still remain somewhat elusive.

Lots of changes happen in the cells and tissues of our body when we age. Cells may lose their ability to divide, become less effective at clearing waste, less efficient at generating energy, or less resilient to damage caused by cell stresses. In turn, this can make us more susceptible to age-related diseases such as Alzheimer’s disease or cancer.

While diseases like Alzheimer’s aren’t a normal part of the ageing process, they are caused by distinct brain diseases, they are strongly influenced by age. Age is the biggest known risk factor for Alzheimer’s and many other dementias and while two in every 100 people aged 65-69 will develop dementia, this rises to one in five for those aged 85-89. 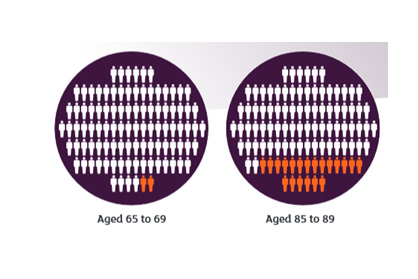 By studying what’s driving healthy ageing, researchers can gain a huge insight into how these processes go wrong in age-related conditions like Alzheimer’s.

The team at King’s found that their ‘healthy ageing’ score was higher in healthy older people than in people with early memory problems and Alzheimer’s, suggesting that what they were measuring could also play a role in Alzheimer’s. The important step now is to try to tease apart what these mechanisms are and what they could tell us about diseases like Alzheimer’s.

The papers report that this test could be used as a potential blood test to detect Alzheimer’s, and we’ve discussed similar promising stories in previous blogs. The standards for such a blood test to be used in the clinic are very high and this test isn’t there – it needs more validation and development. But identifying why people may be more susceptible to age-related diseases would be invaluable to ongoing research into dementia.

How can I age well?

This is a question that’s been on people’s lips for centuries. With advances in medical research, we now live in an age where many chronic health conditions can be managed relatively effectively helping people to live longer and with a better quality of life. Unfortunately dementia is not one of these and will affect more and more people as the population continues to rise.

The diseases that cause dementia are complex, but through research, we know we can make advances for those affected. If you want to read more about the risk factors for dementia and the steps you could take to help keep your brain healthy, visit ‘Reducing the risk’.

Tagged with: Alzheimer's disease, Behind the headlines
Scientist Focus: Fiona Marshall
In the news: Could Alzheimer’s proteins be passed between people?