You are here: Home > International Clinical Trials Day 2018: The voyage of drug discovery
By Katie Puckering on 20 May 2018 0

On 20 May 1747 James Lind started the first ever clinical study to test the cause of scurvy in sailors on board the HMS Salisbury. His trial consisted of just 12 men, grouped into pairs and given a variety of dietary supplements from cider to oranges and lemons. The trial only lasted six days but, within that time, there was a noticeable improvement in the group eating the fruit, providing Lind with evidence of the link between citrus fruits and scurvy.

Science itself is often described as a voyage of discovery. International Clinical Trials Day falls on 20 May, a day before Dementia Action Week starts, so this is a perfect opportunity to talk about how clinical trials are changing the future for people with dementia.

There are currently 850,000 people living with dementia in the UK. The condition, most commonly caused by Alzheimer’s disease, affects people’s ability to remember, think, plan and communicate. Sadly, while there are treatments that can help with the symptoms, there is currently no way to slow or stop the diseases that cause dementia.

With no new treatments for Alzheimer’s disease in 15 years, and no treatments currently available for many other forms of dementia, it is becoming increasingly important to tackle this condition head-on with high-quality dementia research.

What are clinical trials?

Clinical trials are research experiments or observations; studies involving people that are designed to answer questions about biomedical or behavioural aspects of disease. This may include investigating new treatments such as medicines, vaccines, dietary supplements and medical devices. There are two main goals to testing medical treatments:

Studies can only be conducted after they have approval from an ethics committee, who weigh up the risks and benefits of the trial and decide whether it can be conducted.

Volunteers or patients are enrolled onto pilot studies to initially test a product. If successful, investigators would then move on to progressively larger scale comparative studies such as randomised controlled trials. This is a type of study where half of the volunteers receive a treatment and the other half receive a placebo (or dummy treatment), then both groups are followed up over time. This allows researchers to investigate the true effects and safety of the treatment in larger groups. The way that clinical trials are designed aims to make sure the results are:

So, what about dementia research?

Much of the pioneering dementia research that you’re helping us to fund focus on three main areas:

1) Understanding what the condition is.

2) Discovering what biological processes are affected and how.

3) Preventing these processes from going wrong or fixing them when they do.

What we know is that dementia is a term used to describe symptoms that can include memory loss, confusion and an inability to process information. Dementia is caused by several different diseases, commonly Alzheimer’s disease and vascular dementia, and less commonly dementia with Lewy bodies and frontotemporal dementia.

What we know less about is what is going wrong in the brain when someone has dementia, and how we can make it right. Even though the end-game is certainly to have life-changing treatments for dementia, the road to this goal cannot only be drug development.

Laying the groundwork for new treatments

As a biomedical research charity, we fund research into four main areas: prevention, treatment, diagnosis and causes of dementia. We need to understand more about the causes of dementia so that we can prevent it, and we need to discover ways of diagnosing it earlier, so that we have a better chance of treating it sooner.

Through research we can improve our understanding of how damage in the brain occurs, and how this contributes to diseases like Alzheimer’s and frontotemporal dementia. This in turn helps us make progress in drug trials for new treatments.

For example, Dr Jonathan Morris and Prof Diane Hanger from King’s College London, studied molecules called thousand and one amino acid kinases or TAOKs. They found evidence of abnormal TAOK activity alongside tau tangles, implicating these proteins in the damage that happens in Alzheimer’s disease and frontotemporal dementia.

By finding this out the researchers were then able to use an experimental drug called Compound 43 to reduce the activity of TAOK in cells and successfully lowered the amount of abnormal tau that the cells produced.

The research team is now working with experts from the Alzheimer’s Research UK Oxford Drug Discovery Institute to explore the findings further.

Why does it take so long to find a treatment?

Only 14% percent of all drugs started in human clinical trials become an approved drug and the process of getting a new drug approved for use in humans can often take 10-15 years.

When a new treatment is developed, there must be rigorous testing of the drug before it gets to patients. This process begins in the lab, in what are called preclinical studies. Scientists use either cells in the laboratory or animal models to prove that the drug shows promise in treating the disease.

If the results are promising, research then moves into Phase 1 trials and the drug is tested first on a small group of people who don’t have the disease. This is to ensure that the treatment doesn’t cause any unwanted side-effects, before testing it in people with the disease. 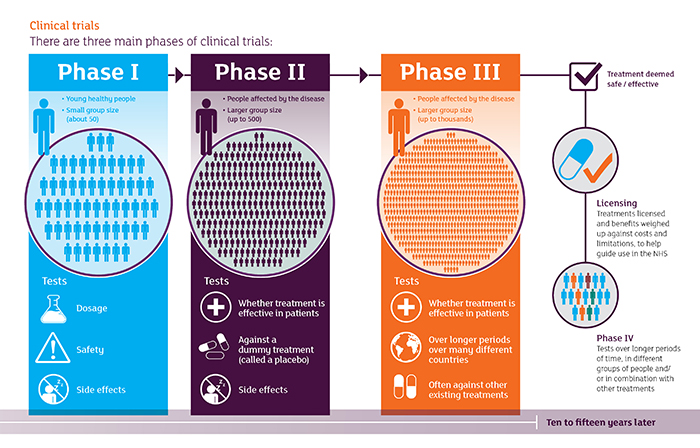 Each phase of testing the drug is treated as a separate clinical trial. This drug development process will normally proceed through all four phases over many years. If the drug successfully passes through phases 1, 2 and 3 it will be submitted for approval by the appropriate regulatory authority before it can be used in patients.

How can I get involved in dementia research?

Alzheimer’s Research UK is a charity partner in an initiative called Join Dementia Research, run by the National Institute for Health Research.

Join Dementia Research is a nationwide database that allows people with and without dementia to register their interest in volunteering for research studies. Researchers can access this database to find eligible volunteers to take part in their studies and so it gives you the opportunity to take part in research that is happening across the country.

Involvement in these studies ranges from answering questionnaires and memory tests online to having brain scans, or even taking part in drug trials. To find out more or to register for Join Dementia Research, go to www.joindementiaresearch.nihr.ac.uk, or call our Dementia Research Infoline on 0300 111 5 111 and we will be happy to help you.

If you have any other questions about dementia or dementia research, please do not hesitate to contact us by telephone on 0300 111 5 111 or email at infoline@alzheimersresearchuk.org

View all posts by Katie Puckering →