The human brain is a complex structure made up of different types of cells. You have probably heard scientists talk about nerve cells or brain cells. These are the cells that are lost in Alzheimer’s disease. However, there are a similar number of other cell types within the brain, called glial cells. Glial, comes for the Greek word for glue; as these cells were originally believed to hold the nerve cells together. It is now clear that these cells are highly specialised and vital for brain function. There are 3 main cell types that fall within the glia family:

1. Astrocytes: so-called star shaped cells, they are responsible for maintaining the environment that the nerve cells exist in;

2. Microglia: the brain’s resident immune cells, they are effectively the brain’s police force protecting against injury and infection; and

3. Oligodendrocytes: these cells insulate the wiring of the brain, acting as the brain’s resident ‘Bob the Builder.’

Dementia researchers, like myself, are keen to investigate what happens to all 3 types of glial cells in Alzheimer’s disease. My interest lies in understanding the role astrocytes play in brain diseases.

What do we know already?

Astrocytes are one specific type of glia that are being widely studied, in the hope that they provide novel avenues for developing medicines to treat Alzheimer’s disease. We know that unlike nerve cells, astrocytes are not lost in Alzheimer’s disease. While the number of astrocytes remains the same, their activity changes dramatically as the disease progresses. We are now starting to understand these changes and the impact they have on brain health. 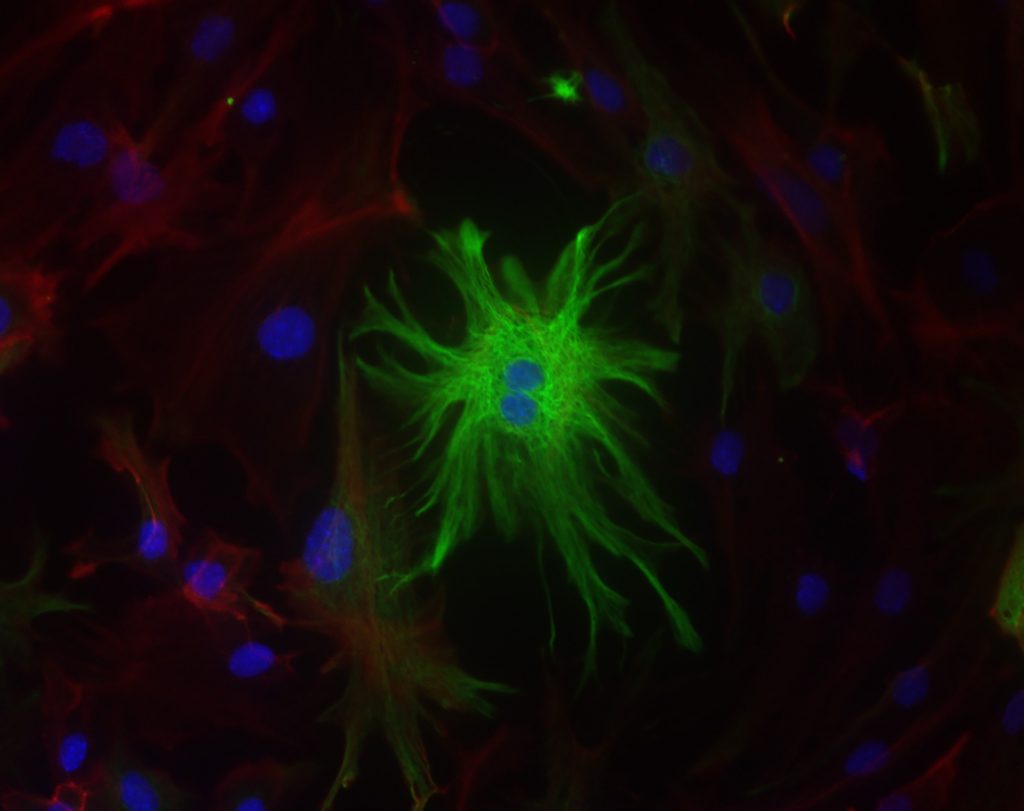 Astrocyte in green (as featured in Biochemical Journal)

Your donations are helping support Dr Dallas’ research, which he’s recently been asked to summarise in a review of progress for the research community. You can read the full review here.

Dr Mark Dallas is currently a Lecturer in Cellular and Molecular Neuroscience at the University of Reading. He has been involved in dementia research for the last 8 years and is interested in understanding the role of glia cells in Alzheimer’s disease. Most recently he has become interested in examining microglia and their contribution to Alzheimer’s disease and this vital research is also funded by Alzheimer’s Research UK, in a collaboration between two of the charity’s Network Centres. This type of collaborative research is necessary in our fight against dementia. In addition, he is also the Early Careers Representative for the Alzheimer’s Research UK Oxford Network, so is a keen advocate of young researchers starting out in career in dementia research.
View all posts by Mark Dallas →

2 Responses to It’s not all about the nerve cells