For over twenty years at Alzheimer’s Research UK, we’ve built our reputation around funding the very best ideas in dementia research, from discovery science to clinical application. But our remit doesn’t stop there. We also play a role in helping our supporters and the public understand dementia and to communicate the progress of research towards new treatments, improved diagnosis, prevention and, ultimately, cure.

Getting into a lab and experiencing the environment really makes the process come alive.

Around 18 months ago we reflected on this side of our remit and considered how we might bring some innovation to our communications on dementia research. We knew from having taken many supporters to Alzheimer’s Research UK-funded laboratories over the years that getting into a lab and experiencing the environment really makes the process come alive.

So we decided to build our own lab online. We would allow our virtual visitors to tour the facilities whenever they liked and at their own pace. We would help our visitors gain an understanding of the components of dementia research that come together to turn early scientific ideas into benefits for people with dementia. And we would use the latest web technology to make the experience one to really savour. 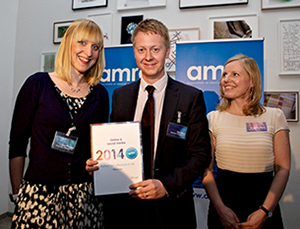 This week, months of development and the input of many scientists and people affected by dementia, not to mention the toil of our science communications and digital teams, culminated in The Lab landing best use of online at the AMRC’s Science Communications Awards. A proud moment for us at Alzheimer’s Research UK, and clear recognition that thinking differently about communicating science can deliver engaging and enlightening experiences for the public.

As we chinked glasses to celebrate, we were promptly called back to the stage as the ARMC’s Judges declared The Lab the overall winner of the awards in 2014. It’s some accolade to be picked out from a field that included groundbreaking projects from the likes of Cancer Research UK, Muscular Dystophy Campaign, British Heart Foundation and Parkinson’s UK to name a few.

The AMRC Science Communications Awards provide a welcome opportunity for charities of all sizes to meet, share ideas and celebrate the different ways we communicate science to the public. On the evidence of this week’s awards, this is a sector that takes its responsibility to communicate science very seriously, with no shortage of creativity. 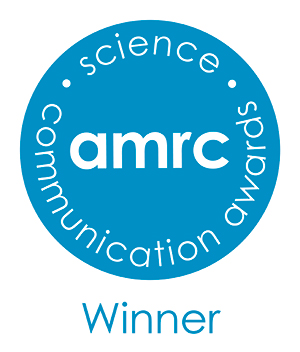 Coinciding with our happy awards evening at the Whitechapel Gallery, we learned this week in the 2014 Public Attitudes to Science study from Ipsos Mori, that around 90% of the public trust scientists working in universities. You’d have to be a committed glass-almost-empty pessimist to see that statistic as anything other than a ringing endorsement for the kind of academic science we fund at Alzheimer’s Research UK. However, 10% still need some persuading, and I think that can only come from transparency around what goes on behind those microscopes.

So The Lab will build on this early success, and next we have plans to get the resource into schools. We want to use this virtual world to inspire the next generation of scientist whose light bulb moments will become the treatments that make the difference in the real world.

What’s the point of a blood test for Alzheimer’s?
A Closer Look at the Role of a G8 Envoy

One Response to Science is golden