You are here: Home > Ladder couples – working together as a pair
By Trisha Macnair on 30 September 2013 2

On three occasions this week patients have said to me ‘In our house, I am the brains and my husband (or wife) is the brawn’. What they were all trying to explain was how each one of the couple is no longer independently strong but precariously leaning as a result of health issues.

Like the uprights of a stepladder, couples lean on each other, propping up each other’s limitations, holding their lives together as a single unit while the rest of the family or the community provide extra cross-struts of support.

Today in the clinic, for example, one man explained how he perches in the kitchen, barely able to move without getting breathless because of his heart condition, while he gently directs his wife to make lunch. She has no problem swinging pots and pans around the kitchen, but her mild dementia leaves her wondering what to do with them next. 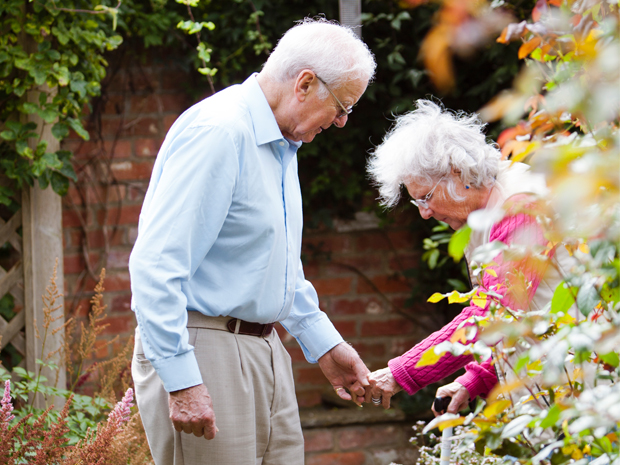 Later, on one of our wards, a frail woman now confined to a wheelchair told me that she and her husband still enjoyed some gardening. He loved the feel of soil in his hands, just as he had since he was a young man but, unable to recollect what he had planted where, he relied on her to sit out with him, keeping a diary of how they had planned their vegetables and flowers.

Like the uprights of a stepladder, couples lean on each other, propping up each other’s limitations.

Ladder couples, if you’ll excuse the rather quirky term, are a new dynamic appearing among older people and in many cases it’s a harmonizing of muscles and minds that enables the couple to keep their world turning much as before.

As geeky data fanatics tend to, I searched for a graph or two to give me some insight to how or why I am seeing more couples like this. Google immediately obliged by coughing up a great interactive graph from The Office for National Statistics (ONS) Data Visualisation Centre which shows decades of Census data.

How demographics have changed

At the start of the 20th century, most people lived in extended families and the average life expectancy was around 60 years. Although women tended to outlive men, very few people of either sex reached their eighth, ninth or even tenth decade and so many chronic diseases we see today, including dementia, were uncommon. Physical illness was a burden, but families were usually not far away to help. However, few people survived once they became frail as they succumbed to problems such as infections which couldn’t be treated. Then just as public health started improving and people began to live longer, the male population in particular was decimated by the thunder of two world wars. 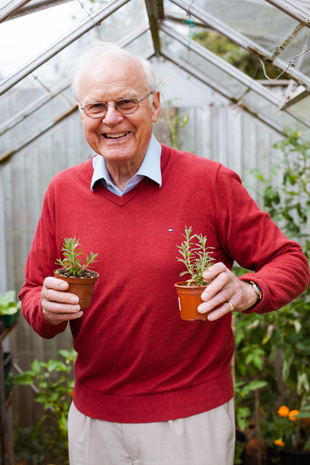 By the 1970s, 80s and 90s (as the war generation was growing old) there were up to four times as many women as men reaching 80 or 90. Families were becoming more spread out across the map, and many women faced old age alone. The wedding vows ‘To love and cherish as long as we both shall live’ failed to encompass the last 30 or more years of many women’s lives.

But now, as people who were born in the 1930s (and so were only children during the war) reach their late years, we’re at last seeing more couples survive together into old age, especially as modern medicine increasingly helps men to live as long as women. Couples are finding that these later years of their relationship demand a particular kind of teamwork, as they increasingly lean on each other. I’m not sure if this fulfills the marriage expectations of loving and cherishing, but by working together and using their entwined understanding and caring they can carry on and maintain their independence.

As a society, we must adapt to this new dynamic and do more to understand the needs of couples who rely heavily on each other, and how we can support them. When one of the two grows too weak to hold the other up as before, we need to work to restore the balance of the unit.

At the moment care is often heavily directed at individuals. When a person is admitted to hospital for example, our responsibility is only for that person and we’re supposed to plan for them alone, leaving the community team and family to sort out their partner. Another example is the limited availability of places in supportive living or residential homes for couples.

Staying together is, for most people, one of the fundamental aspects contributing to quality of life. On a more pragmatic level it may be vital to their existence.

Dr Trisha Macnair works part-time as a Specialty Doctor in Medicine for the Elderly at Milford Hospital, and at the Royal Surrey County Hospital in Guildford, UK. Her clinical interests include all aspects of geriatrics but especially the management of acute crises in the frail elderly, dementia and ethical issues especially around the end of life. For the rest of the week she works as a freelance health journalist, writing both for the public and health professionals. She regularly contributes to radio and writes for many magazines, journals and papers, with columns in Yours Magazine and in Peverel’s Lifestyle. She has also written a number of books.
View all posts by Trisha Macnair →

2 Responses to Ladder couples – working together as a pair