Lost Chord is a charity providing therapeutic musical sessions for people with dementia. We work in residential homes and the community at day centres specifically for people in their early stages of dementia.

Music can often be the key. It can reach into the very soul and unlock the door that dementia has pulled shut for some. The person can come out of themselves, raising self-esteem and improving quality of life. The joy and release music can sometimes give is immeasurable.

The impact of music

At Lost Chord, highly trained professional musicians perform a variety of musical instruments and styles in order to stimulate responses from those affected by dementia. The musicians are auditioned at the National Opera Studio and train on the impact of music for people with dementia and its importance in the care industry. The musicians are given help and support to develop their skill at communicating

We believe that people with dementia need healthier/more active stimulation to participate fully in life. They can become withdrawn and sometimes experience extreme isolation, severe depression and reduced self-esteem due to an inability to communicate.

We are giving people with dementia a vehicle through which they can continue to communicate. The evidence of the power of live music in unlocking memories is striking and undeniable and the sense of achievement experienced by them is overwhelming. 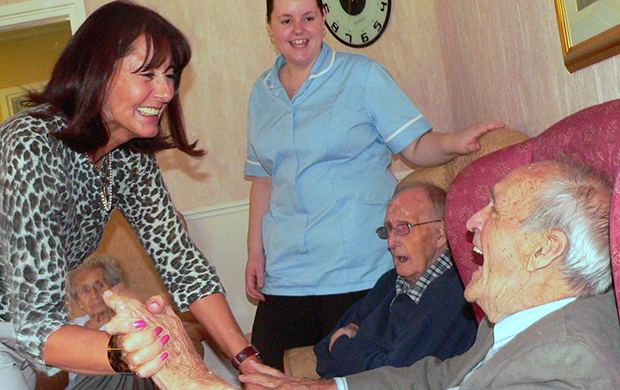 As part of our work highlighted in the case studies below, during our sessions, we’ve found that the power of music therapy has enabled some patients to speak for the first time in months or sung a familiar song, or express themselves in music and dance. We’ve also found that some people with quite violent or aggressive tendencies have been visibly calmed by the music. Some who are disorientated and unable to sit for any length of time have sat and listened for longer than anyone thought possible.

I first met Hilda 14 years ago. She was one of my favourites. She always had a big beaming smile on her face and loved her music. She was a wheelchair user with very little verbal communication, however we all knew when she was enjoying herself as her right arm would float into the air with excitement. This was the only arm she could move. Having lost contact with her, two – three months ago we were asked to go into the rooms of those who were confined to their beds. There I met Hilda again; I told her ‘I haven’t seen you in such a long time. I’ve brought a musician to play for you.’ The Oboist started to play Gabriel’s Obo and quite suddenly Hilda’s right arm floated into the air. Her carer ran out in tears saying she hadn’t seen Hilda do that in months. If people say you are wasting your time, they don’t even know you are there, I know they are wrong because of Hilda!

‘That’s the first time I’ve danced with my wife in 18 years.’

Visiting another home I asked the carers if anyone could weight bear. They helped Alice out of her chair and we danced just moving simply to the music. Just as I was about to put her back down the little old man sat at her side jumped up and took over. They danced with the most complicated dance steps imaginable. They had been gold medal winning championship dancers and they carried on dancing for the rest of the session. At the end the husband came with tears streaming down his face and said ‘That’s the first time I’ve danced with my wife in 18 years, we’ll get her better yet!!’ That afternoon we gave him hope and sometimes all we have left is hope.

Helena Muller is the Chief Executive and Founder of Lost Chord, a charity established in 1999 that organise interactive musical sessions for people with dementia. She is a national and regional member of the Dementia Action Alliance as well as a member of the Older People’s Mental Health Priority Group, The Dementia Prevention Group and The Health Network. She supports several other charities and is a Trustee for the Sheffield branch of Emmaus, a charity supporting and housing the homeless.
View all posts by Helena Muller →

Walking amongst giants
Good luck to all our TEAM ARUK runners