You are here: Home > Meet one of Britain’s youngest dementia carers
By Clare Brien on 16 June 2016 0

Caring for a loved one with dementia can be very difficult. Now imagine doing it from the age of 10. Clare Brien, now 19, shares her story.

As a young child, I never imagined that I’d end up in the position that I’m in now. Like most kids, I spent my days playing, blissfully unaware of what life could bring, until everything changed. On 20 September 2007, when I was just 10 years old, something happened that would alter the course of my life forever; my dad suffered a severe stroke that nearly killed him.

After that, he was diagnosed with vascular dementia, caused by a disruption in blood flow to the brain. Most kids dream of growing up to be an astronaut or a prima ballerina, but not me. At the age of 10, I put my dreams away and effectively became an adult in a child’s body.

Today, eight years later, my days revolve around the complex juggling of college work and looking after a middle-aged man who wakes up every morning not knowing who or where he is, or what his connection is to anyone around him. As my dad’s carer, I’m responsible for helping him get into and out of bed each day and for cooking his meals. I’m also in charge of administering 27 different tablets on a daily basis. 27 tablets that, if not taken at precisely the right time, could potentially kill him. Having that sort of responsibility on your shoulders is like nothing I could ever have imagined and has made me all too aware of the fragility of life. 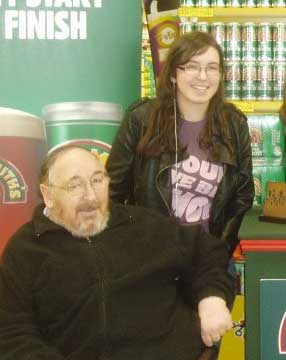 Clare with her Dad

Seeing someone so close to you, someone who had been so independent, so in control of their life, suddenly rendered so vulnerable and helpless is initially very difficult to take and, even if you do accept it, life is still a daily challenge. I wake up every morning literally not knowing what to expect, even fearing that I’ll find he’s died in the night. Some days, Dad will be fine. But there are other days when he’ll wake up and it’s as if he’s never seen anything or anyone before. On these days, he needs constant supervision and other matters, such as college work and friends, simply get put to one side whilst my sister and I help out.

Being a carer is by far the most difficult thing I’ve ever had to do, but it’s nothing compared to what Dad faces. I can only imagine how petrifying it must be for him. The blankness and darkness in the depths of his eyes, which show nothing but fear and a total lack of understanding, used to be so painful for me to watch, but this has become normal life for me now.

I often used to wonder what life would be like if Dad had never become ill, what sort of person I’d be now if all of this had never happened. I’d get frustrated and angry at people who took normal life for granted and seemed to have no idea of the difficulties so many of us experience every single day. But then in November 2013, when I was at a particularly low point, I met someone who helped me realise that such thoughts are self-destructive and that I had to make the decision to move forward. 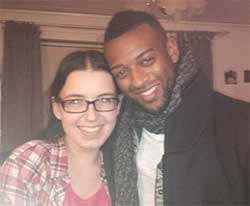 Clare and Ortise from JLS

Oritsé Williams, founder of X Factor band, JLS, has been a carer for his mum, who has multiple sclerosis, since he was a child. He enabled me to see that my life wasn’t as complex as I thought and that I could make things work for me, even if it sometimes seems impossible. I was fortunate enough to spend two days with him, filming a documentary called ‘Britain’s Youngest Carers’ for Channel 4. Being a part of this experience was fun and gave me a chance to be a normal teenager for once. But, more importantly, it made me realise that I can still do whatever I want with my life and that, if anything, my experiences as a carer will help me to succeed in a changing world as they’ve made me more adaptable.

When I was a child I was obsessed with fairy tales, particularly the concept of living ‘happily ever after.’ But now I know that reality’s not like that. Eventually, this illness will kill my dad. For the past eight years, it’s been slowly chipping away at him day by day. But for the moment, I’m just happy to still have him with us. The type of stroke dad suffered usually kills when it hits, but he survived and lived to fight another day. Each day that I spend with him is so precious and I know that I’m incredibly blessed to still have my strong, brave and extraordinary dad.

Clare Brien is a 19-year-old college student who has been caring for her dad since the age of 10. He lives with vascular dementia after suffering from a stroke. Clare studies law, English and history and hopes to continue to study law at university.
View all posts by Clare Brien →