You are here: Home > Moving mountains: fundraising and training for a trek
By Steve Andrews on 22 September 2017 1

“If somebody offers you an amazing opportunity but you are not sure you can do it, say yes – then learn how to do it later!”

I heard about the Spires of Fire Guatemala Volcano Trek at the turn of 2017. Wow, I thought, what an amazing opportunity: Alzheimer’s Research UK’s first dedicated overseas fundraiser sounded like something I should be part of – trekking over five volcanoes in seven days in April 2018.

I was already fundraising for the charity through the Cambridge Half Marathon but I was keen to do more to support their amazing work and realised that this was also an amazing personal opportunity. But how could I raise the required £3,500 to go to Guatemala before April 2018?

I decided to sign up and paid my registration fees. I’d have to learn how to raise money later.

I’ve met people who can raise thousands of pounds for charity seemingly just by getting out of bed in the morning. I am not one of those people and the £3,500 initially seemed like a very tall task. Even more so after a couple of weeks of asking all my best friends and close relatives for money and barely scraping together £100. What had I let myself in for? It’s not within me to start something and not finish so all I could do was keep trying.

Some early ventures into soliciting sponsorship taught me that some people need to feel like they’re getting something for their money which goes beyond helping a charity. Some felt like I was just asking them to ‘pay for my trip to Guatemala’. This led me to set up an Alzheimer’s Research UK challenges page on JustGiving.com, committing myself to a series of tough physical challenges that would prove I would be earning people’s sponsorship.

I saw my challenges as a way of creating awareness of dementia and Alzheimer’s Research UK, as well as raising money for vital dementia research. So, I made sure to wear my orange Alzheimer’s Research UK t-shirts at every parkrun, UK Cycling Event, obstacle course, triathlon and any other challenges that I entered. I also gave public talks on dementia and researching treatments, and even managed to get onto local radio in Cambridge.

Friends and family soon saw how much time, effort and money I was putting into this endeavour and started to sponsor me. Each month I would think about who to contact to try and hit £200 to inch my way towards my target. I spent hours writing emails to local listings agents, businesses and clubs asking for support.

A huge breakthrough came when I realised that many companies have a budget for giving money to charity each year. So I contacted a number of companies who I have worked with over the years and told them about what I was doing. Their budgets were larger than my friends’ so I started to get donations of £50, £100 or even £250. Again, I would pace myself and send batches of emails to contacts so that the money would continue to roll in. Many people ignored my messages but before I knew it, I was halfway to my target.

The breakthrough with companies led me to approach high street stores. Big chain stores are contacted by many fundraisers so are more selective in what they’ll donate. However, I found that many stores would give me one of their products for a raffle.

So, I made plans to set up an Alzheimer’s Research UK Mighty Quiz in my village hall, with a raffle on the night. When speaking to the manager of a local restaurant to ask for a raffle prize they offered to host the event for me at their restaurant for free. We ended up selling quiz tickets for £20 with £6 going to my fundraising page and £14 to the restaurant to pay for a two-course dinner for the quiz guests. It was a struggle to sell tickets at first but after asking friends to form a team from people I didn’t know, I could widen the circle of contacts. After a lot of work, I sold-out the venue and had 129 guests come along to the mightiest of Mighty Quizzes. From ticket sales, the raffle and other games on the night I raised nearly £1,400.

I haven’t yet finished all of my challenges and www.justgiving.com/ARUKchallenges  is still open; however, I recently hit my most significant milestone yet: a half-ironman distance triathlon.

I’ve been training for months and the other challenges through the year have been stepping stones towards this event. I managed to complete the 1.2-mile swim, 56-mile cycle and 13-mile run in under six hours and I’ve now raised over £3,500. The absolute highlight was running down the red carpet to the finish line with my two children holding my hands. 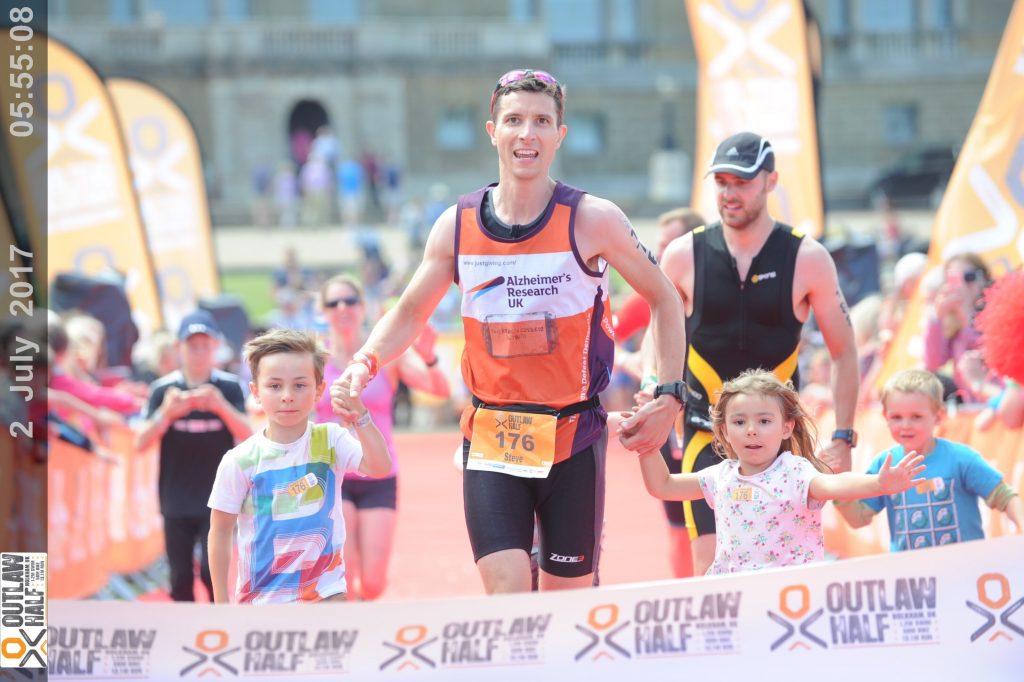 At the start of 2017 I didn’t know how to do what was required to raise enough money to enter the Spires of Fire challenge but I’ve
learnt so much since then.

I joined a triathlon club to help train for my half-ironman challenge and I made lots of new friends. I met many new friends through setting up the Mighty Quiz and met so many friendly and supportive people while asking companies for sponsorship. Signing up for the trek has already enriched my life so much.

I’m sure I’ll meet some other amazing people on the volcanoes. I don’t yet know how I’m going to trek up five spires of fire, but I will learn.

Steve Andrews is the Head of Chemistry at Alzheimer’s Research UK’s Drug Discovery Institute at the University of Cambridge. He decided that he not only wanted to power research as a scientist but also wanted to fund it and has taken on a series of challenges which will culminate in taking on Alzheimer’s Research UK’s Guatemala Volcano Trek in April 2018. Steve has been passionate about dementia research ever since he lost his nan Simone Andrews to vascular dementia in 2007.
View all posts by Steve Andrews →

One Response to Moving mountains: fundraising and training for a trek