Siobhann Ardley lost both her parents in 2016, her 68-year-old mum Annette Royce in August and her dad Michael Royce in November, a day after his 71st birthday.

Michael had been living with Alzheimer’s disease for almost a decade, and passed away in a care home, while Annette died from liver cancer following a terminal diagnosis last June.

On Sunday 23 April 2017 Siobhann took to the streets of London to run the London Marathon for Alzheimer’s Research UK, raising over £6,500. All the way round, she held onto a treasured photo of her parents. 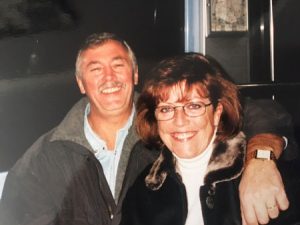 I knew I needed a focus – it would be my way of healing after the loss of both of my parents so close together. My young family provided a distraction but I needed time and space on my own to process my grief. I have lots of experience with running and also fundraising and my parents have always been my most avid supporters. Ever since I was small, my most fond memories are of my dad yelling my name on a hockey pitch or at a tennis match or in the tough stages of a marathon. So I knew this was going to be my tonic and a way to feel close to them both again.

Alzheimer’s Research UK gave me that opportunity and despite being an individual sport, I very much felt part of a team. Seeing the fundraising go up on a regular basis was like adrenaline during training – much like the cheers of support on the day – it provided such a surge of energy and motivation to keep going and such a strong reminder of why you put your body through such a tough regime. 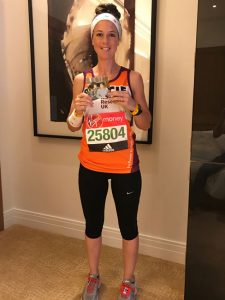 Sunday was one of the most special days of my life. I had a photo of my mum and dad in my pocket and I truly felt their presence the whole way round. They were so proud of what I have achieved and so grateful that I was honouring their memory in this way. It’s what they would’ve wanted, but never expected. And thanks to Facebook, Virgin Money London Marathon Tracker and JustGiving, it meant that hundreds of people who knew mum and dad, from all over the world, were all dedicating that day to them – we were all together through my 26.2-mile challenge.

Marathons, and training for them, are a metaphor for life – there are good times and bad times. Sometimes you feel completely alone dealing with your feelings and other times you have your friends and family and even strangers there to support you through the highs and lows. Our focus has a selfish side to it but a wholly charitable one too. Ultimately everyone benefits from the day, one way or another and for me, it was a true blessing. I ran for myself, for my family, for my parents’ memory and for Alzheimer’s Research UK and amongst that, so many other personal reasons.

More than an athletic achievement, running a marathon is a state of mind that says anything is possible. We don’t enter to win but to experience something unforgettable. It isn’t our heads but our hearts that lead and when the cause you are running for is so close to your heart it feels so big and strong that nothing will stop it from getting to the finish line and there is no greater sense of achievement once you get there.

It pains me to think that my dad made memories like this in his life only for his disease to unstitch them from his brain, but I do take comfort from the fact that his heart left this world as big and warm and as complete as it always was. And so I’ll remember this experience forever because it was shared by so many and I’ll keep it in my heart for the rest of my days.

Thank you so much everyone for this wonderful chance.

Siobhann is a 36-year-old mum-of-two from Cobham, Surrey. She ran the London Marathon 2017 in memory of her parents. Siobhann lost both her parents in 2016, her 68-year-old mum Annette Royce in August and her dad Michael Royce in November, a day after his 71st birthday. Michael had been living with Alzheimer’s disease for almost a decade, and passed away in a care home, while Annette died from liver cancer following a terminal diagnosis last June. Siobhann is no stranger to long distance running, she has also run the toughest footrace on Earth – the 250km Marathon des Sables - and a number of other ultra-marathons and Ironman challenges.
View all posts by Siobhann Ardley →

3 Responses to My parents in my pocket