Alzheimer’s Research UK’s Regional Fundraising Officer James Warren has decided to share the love story of his parents Chris and Hilary Warren. The couple share a room at their care home following a diagnosis of dementia within just two years of one another. But despite not always being able to remember who one another are, the two ‘soul mates’ are still head over heels in love after 50 years.

Mum and Dad first met in the mid-1960s in London when he worked for the Post Office. Mum went in to buy some stamps and thought Dad had short changed her. He was adamant that he hadn’t and to diffuse the situation, asked her out on a date. Fifty or so years later and I’ve never found out who was right, although Dad is still convinced it was him. Either way, I’m glad Mum had fewer stamps and change than she thought she should have.

Their first date was going for some fish and chips and then going to the cinema to see Zulu. Years later when I bought them it on DVD they told me that they had never actually seen the end of the movie as it finished after Mum’s strict 10pm curfew. In between more films and concerts, Dad would write Mum love letters in those early years of dating, something she kept safe and treasured for many years.

They came from quite different backgrounds and I think Dad enjoyed being part of Mum’s family. Looking at their Irish honeymoon photos you can see his beaming smile as he shows off his Rover to her uncles. He was always trying to make Mum laugh with his terrible jokes and cheeky humour, something he still tries to do today but finds much harder. 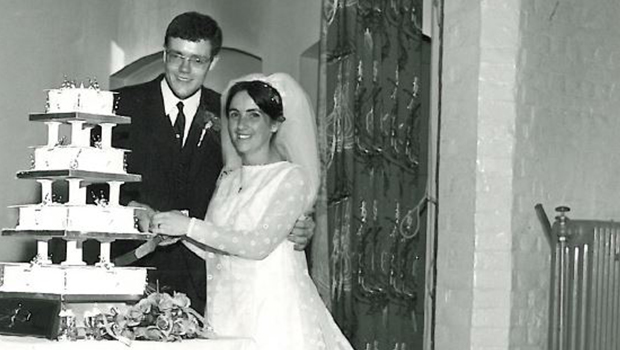 They were never ones for public displays of affection but they would always hold hands when they were out and have a cuddle as they watched TV. Simple, honest gestures. Mum is only 4ft 11 so it’s easy for Dad, at a foot taller, to put an arm over her shoulder. These days he tends to hold onto her forearm instead of her hand. Partly to steady himself and partly so she doesn’t wander off and get lost.

In 2007, Mum fell down the stairs after an aneurysm.

A few years later, and soon after each other, Mum was diagnosed with vascular dementia and Dad with Alzheimer’s. After a tough few years for them, and seeing them do so much for others, it seemed like a particularly cruel blow. In those early days after diagnosis they continued to look after each other, still going for their walks and day trips on the bus together and enjoying being grandparents to my niece. Soon enough that became harder and harder.

They would get confused and lost, getting off the bus at the wrong village or riding it for the full loop. We moved them from their house in the village to a house much closer to my sisters and me. They were able to live there for nearly two years before we had to accept that we couldn’t provide the care they needed and they moved into a home. They still share a room, I couldn’t imagine them not, although I know someday we may need to consider that. 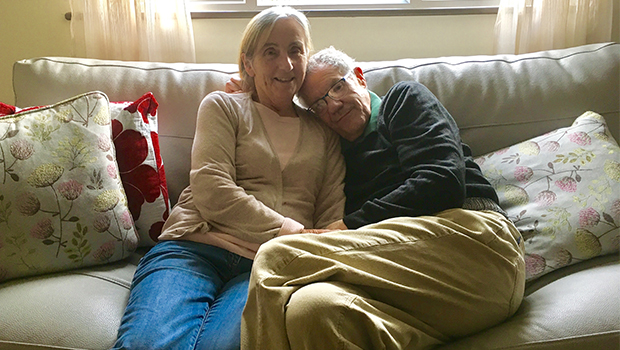 Mum gets very anxious and she doesn’t know why, at times she won’t recognise Dad or us but she will always ask where Chris is and tell me that she loves him and how lovely he is. Dad still recognises Mum but it gets harder and harder for him each day. He will tell of the times that ‘she won’t talk to me, it’s like she doesn’t know who I am’.

The lowest point for Dad was when he was feeling so low with having Alzheimer’s he tore up the letters he wrote to Mum and some of their photos too. I’m working my way through piecing them back together and I hope to be able to give them back to him one day soon. 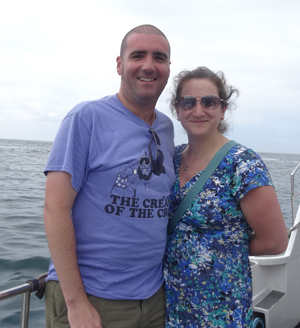 There are good days though, and we make the most of them. Dad will often tell me that he and Mum went dancing or for a drive in his car, and it’s nice to know that he recalls those happy memories even if he is confused as to when they happened. In her more lucid moments, Mum will still hold his hand and try and chivvy him along and look after him. Then there are moments like last night where they were just content to sit having a cuddle on their sofa, just enjoying having time together.

It’s incredibly hard to accept what has happened to Mum and Dad. They are two of the best people I know. They are a great example of what a partnership marriage is. In June, they will have been married for 48 years.

If my wife, Ellie, and I have half as good a marriage as they do then we will be just fine.

Go to http://www.alzheimersresearchuk.org/the-real-life-notebook/ to read more about Chris and Hilary’s story and for a link of where to donate in their honour.

James Warren is the Regional Fundraising Officer for the south west at Alzheimer’s Research UK. He has also raised thousands of pounds for the charity with a number of gruelling challenges, in honour of his parents Hilary and Chris, who are both living with dementia.
View all posts by James Warren →

Sir Terry Pratchett: A watershed moment for dementia
Why we made The Trouble with Dad…

4 Responses to My parents’ love story