You are here: Home > Party Conference season
By Dr Matthew Norton on 9 October 2014 0

Alzheimer’s Research UK and the launch of our Manifesto

Late September and early October saw the last series of party conferences before the general election next year, which means it was the last chance for the parties to discuss future policy proposals with their supporters and members.

At this stage of the election cycle, the leader’s speeches are often filled with pre-election promises that are hoped will be welcomed by the general public, such as tax cuts or greater investment in popular areas of spending. This year was by no means a disappointment on that front, and battle lines have been drawn. But it was clear the size of the deficit and fragile nature of our economy was looming large in the minds of all parties.

At Alzheimer’s Research UK we use party conferences to take our message to MPs and Peers, and particularly those in the Ministerial and shadow Ministerial teams with responsibility for dementia research – Health and Business.

To do this we held fringe events, which focused on how the future government should support dementia research in the next parliament. The idea behind these sessions was to get the party members and supporters to listen to our vision and ideas and hopefully incorporate them into their thinking and planning for each of the party manifestos that they launch in the run up to the next general election in May 2015.

The Power to Defeat Dementia

We also used these events to launch the Alzheimer’s Research UK Manifesto, The power to Defeat Dementia. As well as setting out what we would like to see the Government commit to before the election, it also provides a useful yardstick to hold the future government to account over the next parliament.

The manifesto sets out five key steps that we believe will move us ever closer to a disease-modifying treatment and ultimately defeating dementia: 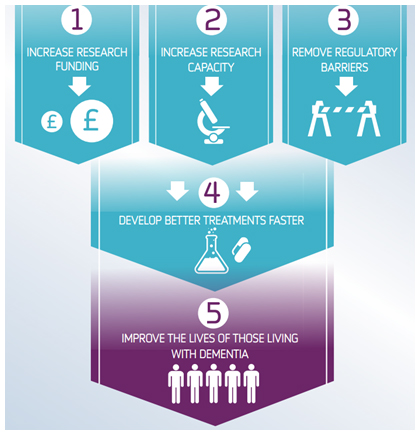 Although there has been a lot good progress made over the last year and government funding has doubled between 2012 and 2015, we were starting from a very low base.  It’s important we see greater investment and this leads to more researchers in the field – government funding acts as a great catalyst for further private investment. We also need to have more of this investment focused on drug discovery, so that we are pulling promising compounds through to tests in patients as quickly as possible.

These are the ideas we will be asking government to sign-up to in the run up to the election next May, and it is how we will be holding the next government to account between 2015 and 2020.

If you’d like to help us get our message to government then please sign up to be a campaigner. There’s lots you can do.  This isn’t always attending meetings or coming to London, but can be things like writing to your MP, or attending local meetings and making the case for Alzheimer’s Research UK. These are often things that many of you may well already do, but we will try to coordinate this to harness the power of the collective voice.

Why donate your brain?
A year full of Christmas